A bipartisan group of city-county councilors has called for a committee hearing on legislation that would use state and local tax revenue for a $150 million, 20,000-seat soccer stadium, part of a larger mixed-use development proposed by the owner of the Indy Eleven. 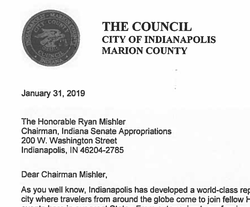 But the councilors—including President Vop Osili, a Democrat, and Republican Leader Mike McQuillen—stopped short of endorsing the stadium project, saying they want the opportunity to "carefully and thoughtfully engage in discussions" about the proposal and the future of soccer in Indianapolis.

“We’re not advocating for anything other than the opportunity for local government to have a say in this,” Osili told IBJ on Thursday.

A letter signed by Osili and McQuillen, as well as the council's majority leader, Maggie Lewis, and its vice president, Zach Adamson, says, "Our ability to act on this, however, is dependent on SB 543 being provided a committee hearing and the prospect of passage by the Indiana General Assembly."

The letter—obtained by IBJ—is addressed to Senate Appropriations Chairman Ryan Misher, who has said he has no plans to have a hearing on SB 543, which authorizes the tax revenue transfers for the stadium.

However, Mishler has said he'd like supporters of the stadium proposal to testify at a hearing on a separate bill he authored that would provide additional tax revenue to the city's Capital Improvement Board for projects at the Indiana Convention Center, Bankers Life Fieldhouse and its other facilities. Mishler has said he would not be surprised by efforts to fold the stadium legislation into his CIB bill.

Indy Eleven owner Ersal Ozdemir unveiled plans for the $550 million, mixed-use Eleven Park last month. The project would include the soccer stadium as well as a hotel, apartments, office space and retail, along with public spaces and parking garages.

The project would be a public-private partnership, with private investors chipping in about $400 million for the residential, retail and commercial parts of the project. The stadium would be publicly funded, with bonds paid off using revenue from property, income, sales and other taxes generated within the development. SB 543 would establish that funding mechanism, authorizing a Professional Sports Development Area to capture the state taxes and allows the city to create a tax-increment financing district to capture local revenue.

Eleven Park developers would be responsible for making up any gap between the tax revenue generated for the project and the bond payments.

The councilors sent the letter to Mishler on the same day Sen. Jack Sandlin, the Republican author of SB 543, was set to meet with Mishler to ask him to reconsider his decision not to have a hearing on the bill.