Home » Among 1 percent earners, where are all the women?

The glass ceiling is even higher in the penthouse.

Women earn enough on their own to qualify for 1 percent status in just one of every 22 top-earning households, new research shows. The gap hasn't narrowed for at least 20 years. 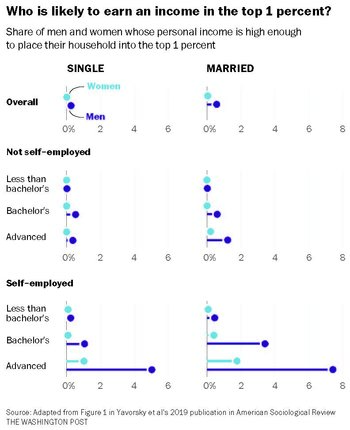 Most college graduates, half of professional-school graduates and a third of business owners are women. Yet few of them break into the highest income tiers.

Married women are 991 percent more likely than single women to be in a 1 percent household, according to the team's analysis of Federal Reserve data collected between 1995 and 2016. The equivalent number for married men is just 70 percent. These figures are adjusted for race, age and the presence of children.

But married women's odds of being in the 1 percent are higher primarily because they have access to their spouse's income. Among top-percentile households, the woman's income was needed to help the household meet the threshold for the top 1 percent only 15 percent of the time. Just 4.5 percent of women earned enough alone to enter the 1 percent.

But Yavorsky cautions against giving one partner credit for 100 percent of their paycheck. Consider novelist MacKenzie Bezos, who may soon become one of the richest women in the world, depending on how her announced divorce proceeds. She would be viewed as a spouse whose wealth was generated by her partner, but reports indicate she was critical to the success Amazon, the online retailer founded by her husband, Jeff Bezos, who also owns The Washington Post.

"Many men would not be where they are without having spouses that were willing to do the majority of household production and willing to subordinate their careers," Yavorsky said.

Cornell economist Francine Blau, whose four-plus decades of work on the gender wage gap have been cited thousands of times, said the new analysis was consistent with her own work. In a 2017 work with collaborator Lawrence Kahn, she found "the gender pay gap declined much more slowly at the top of the wage distribution than at the middle or bottom and, by 2010, was noticeably higher at the top," Blau said.

About 1.8 percent of self-employed, married women with advanced degrees earn enough to place themselves in the top 1 percent. Among men, the figure is 7.3 percent.

Ultra-high-earning women rely more on entrepreneurship than top-earning men, another sign women don't get as many opportunities within traditional corporate structures. Men have more options when it comes to starting businesses, attracting investment or rising through the corporate ranks.

Men still dominate many of the highest-income professions, including finance, hedge funds and top-tier law firms.

In cold economic terms, marriage tends to benefit men more than it benefits women. At all income levels, women are expected to handle child care and other household tasks, and to sacrifice for the good of the household.

"Many high-earning women might not be able to get their spouses to quit their jobs and move for a new opportunity or split child care evenly," Yavorsky said.

When a man is the primary breadwinner, 70 percent of women in elite households don't participate in the labor force, according to Yavorsky and colleagues. When a woman's income is enough to put the household in the top 1 percent, men stay home about 22 percent of the time.

"Many men would not be where they are without having spouses that were willing to do the majority of household production and willing to subordinate their careers," Yavorsky said.

As a result, rising income inequality in the United States is largely a man's game.

"The majority of U.S. income gains over the past 30 to 40 years have gone to top 1 percent of households. If women's income is inconsequential in the vast majority of households, rising inequality is largely due to a small proportion of men's incomes," Yavorsky said.

While women in elite households enjoy great privilege, we should recognize they probably exert little influence compared with their husbands. Research has shown that breadwinners gain additional power in a household, especially if that breadwinner is male and propped up by generations of cultural norms.

"When we talk about 'the elites' or 'the 1 percent,' we're likely talking about men, not women, exercising this power in the political sphere and the economic sphere," Yavorsky said.