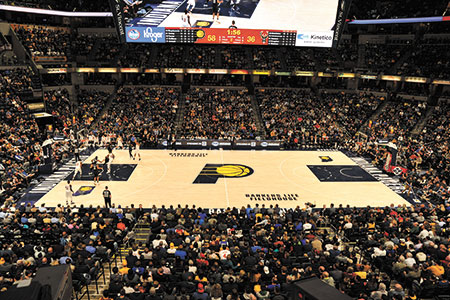 The president of the Capital Improvement Board said negotiations on a 25-year deal with the Indiana Pacers are progressing, but a pact that finalizes the city’s financial commitment to Bankers Life Fieldhouse is likely months away.

That could push a deal past the scheduled April 29 adjournment of the Indiana legislative session—although CIB President Melina Kennedy said negotiators are aiming to finish by then.

State lawmakers are debating whether to dedicate $15 million a year over the next quarter century toward fieldhouse upgrades, which are expected to cost well over $100 million, as well as improvements CIB wants in other facilities it owns. The legislation requires CIB to sign a 25-year deal with the Pacers to receive that revenue.

“We want to make sure we have a long-term agreement with the Pacers, but we aren’t going to rush it,” Kennedy said.

In fact, negotiations are expected to miss an April 1 deadline for a deal outlined in the bill approved by the Indiana Senate and now under consideration in the House.

Missing the mark by a few weeks—or even a few months—isn’t expected to jeopardize the bill’s status. Rep. Todd Huston, R-Fishers, who is sponsoring Senate Bill 7 in the House, said he views the deadline as more of a suggestion, saying it could be shifted if the Pacers and CIB are nearing a deal.

Huston said he and his colleagues would like to see at least the framework of a deal before voting on the bill. But the timing of the 2019 General Assembly means the House will likely have to move on the bill without that.

The approach taken by Huston differs from that of the bill’s author, Sen. Ryan Mishler, R-Bremen, who emphasized the April 1 deadline in public and private conversations and floor hearings.

Kennedy said CIB and the Pacers want to have something ready, “hopefully, in the next few months.”

A deal can’t be finalized until it’s approved by the CIB board, which has meetings scheduled March 15 and April 12, although the board could call a special meeting.

A 25-year deal would theoretically keep the Pacers in town long after the eventual death of the team’s 84-year-old owner, Herb Simon, who has stated a desire to have the team stay put. 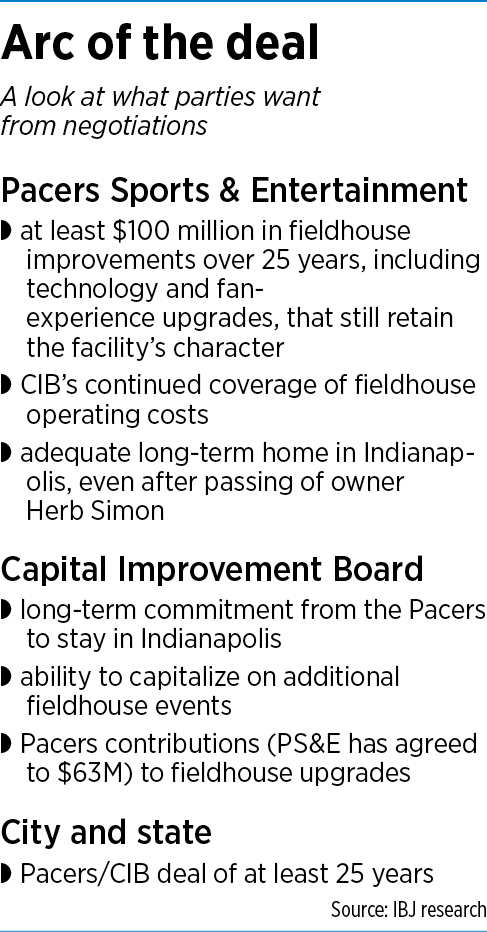 The Pacers are in the middle of a 10-year, $160 million deal with CIB that runs through the end of the 2023-2024 season and requires CIB to cover the arena’s operating costs. Pacers Sports & Entertainment manages the building.

Simon plans to pass his sole ownership on to his son, Steve Simon, who lives in San Francisco. But there’s concern about the younger Simon’s interest in keeping the Pacers in Indianapolis given that he doesn't live in Indianapolis. However, he told The Indianapolis Star last year that, “We always want this team to stay in Indianapolis where it belongs, period.”

Pacers officials declined repeated requests to comment for this story.

Negotiations have been underway for months. Among those in the discussions are a slew of lawyers, a trio of seasoned Pacers executives, CIB officials and at least one representative of the city.

On the Pacers side is Rick Fuson, team president and chief operating officer; Jim Morris, vice chairman; and Mel Raines, senior vice president of facilities and operations. Each has been involved in high-level talks on past local sports deals. The CIB is represented by Kennedy and Executive Director Barney Levengood.

The point person for the city is Thomas Cook, chief of staff for Mayor Joe Hogsett, although the mayor himself has been involved with pieces of the negotiations.

Two local law firms, Ice Miller and Bingham Greenebaum Doll, serve as outside counsel for the Pacers and CIB, respectively, and will be involved in drafting contract language.

Talks have taken place at Bankers Life Fieldhouse, the Indiana Convention Center and by phone, along with other locations CIB and Pacers leaders were not willing to disclose.

A source with direct knowledge of the talks said, while Herb Simon is generally not involved in the specifics, he has contributed to the conversation.

“He’s a deal-maker, always has been,” the source said. “Herb cares about basketball; he cares about the team and about the city.”

The Pacers are expected to seek amenities like those at newer, state-of-the-art facilities and recently upgraded arenas, and are planning to kick in about $63 million. Team executives have been keeping an eye on improvements at other NBA facilities, including hundreds of millions of dollars in upgrades to the Atlanta Hawks’ arena and New York City’s Madison Square Garden. 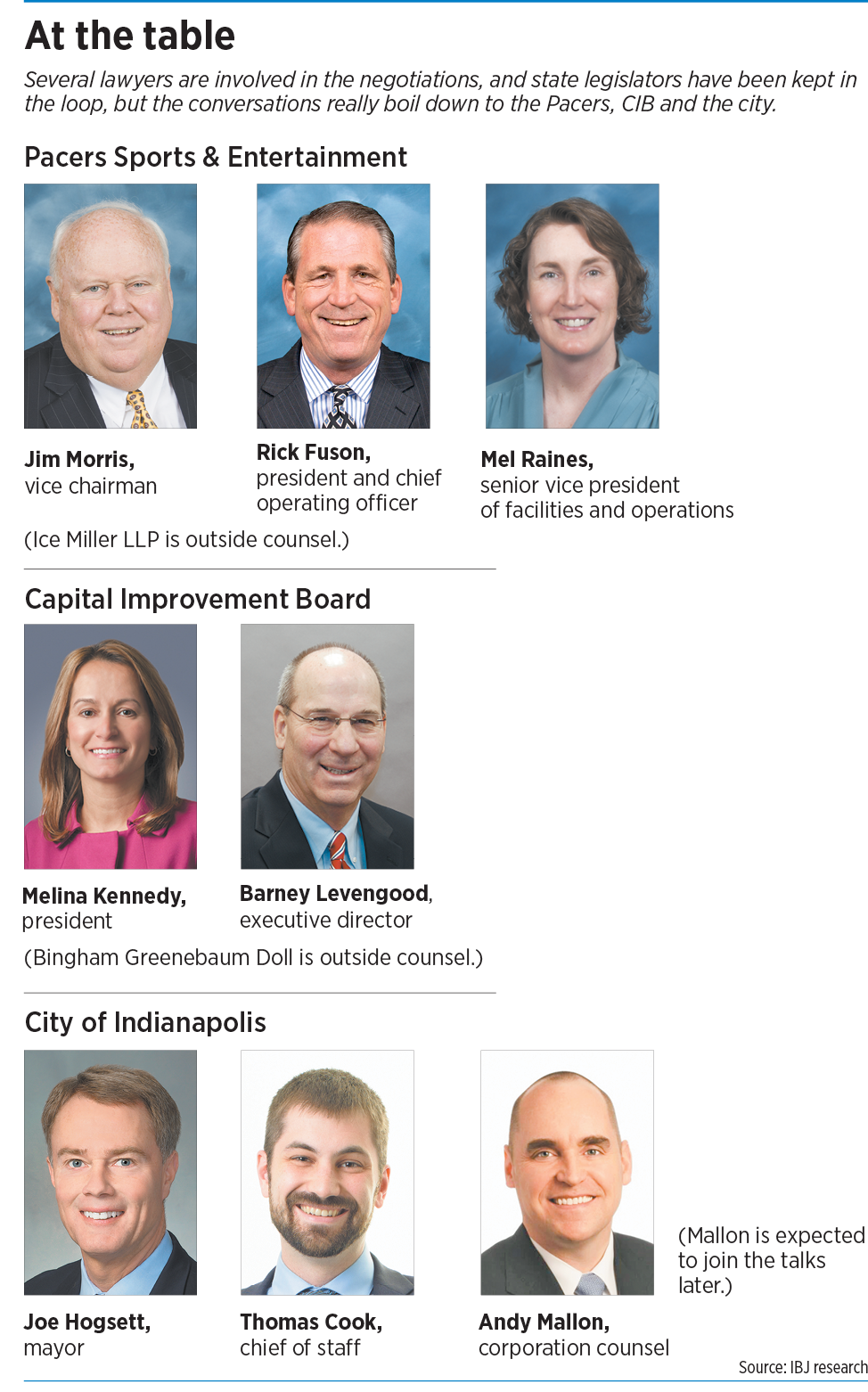 The Pacers are looking for things “in that same vein,” said the source, noting “the goal isn’t to change the character of the fieldhouse” or to alter its structure to add more seats.

Another insider told IBJ that, while he could not say exactly how much the Pacers are likely to seek for upgrades, it “would be fair” to state it will be at least $100 million, and likely “much more.”

Some of that money would likely be dedicated to operating costs, with the rest—perhaps a majority—going toward upgrades.

“It’s hard to know what things are going to look like in 25 years, and what the arena is going to have to look like to be accommodating for fans at that point,” the insider told IBJ.

CIB has spent tens of millions through its deals with the Pacers in the past, making the newest negotiations an extension of the types of agreements the city has made over the life of the team and the fieldhouse.

Under the current agreement, signed in 2014, the Pacers are receiving at least $10.8 million a year toward operating costs at the fieldhouse, which Pacers Sports & Entertainment manages. That includes $7.1 million in reimbursements and the rest for direct expenses.

Before 2014, the Pacers operated under a three-year agreement, which was extended once by one year. Under that deal, the team received about $10 million a year for operating costs.

In recent years, Herb Simon and CIB split the $16 million cost of a new scoreboard and audio and video system. And the Pacers spent $52 million to build the St. Vincent Center practice facility across Delaware Street from the fieldhouse.

CIB’s Kennedy said an effort is being made, as with previous deals, to “work towards something that would make sense for all the stakeholders,” but she indicated there have been some disagreements about how much the Pacers need to support their operations.

The Simon family claims it has lost millions of dollars in operating the team since taking ownership in 1983.

However, Bankers Life Fieldhouse—programmed by PS&E—has helped generate millions in area economic impact, including $163.8 million in 2017 through tickets, hotel rooms and a host of other factors, according to a Rockport Analytics study done for CIB.

The fieldhouse hosted 550 events, including Pacers and Indiana Fever games, during the 2017-2018 fiscal year.

Huston said asking the Pacers to pay for part of the upgrades is fair.

“I think there’s absolutely an appropriate role [for] a contribution from the Pacers,” he said. “They’ve committed, and rightfully they should … to have their own investment in this broad deal.”•