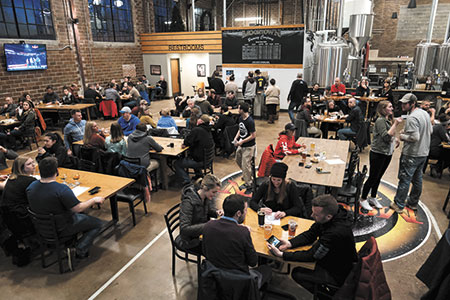 Two bills advancing in the Indiana General Assembly would allow Whitestown, Greenwood and Danville to impose the tax. If the legislation is successful—and if local officials vote to implement it—the communities would join 14 other cities and towns and 14 counties in Indiana with a food-and-beverage tax.

And because the three communities are in counties (Boone, Johnson and Hendricks, respectively) that already impose a 1 percent food-and-beverage tax, diners would actually pay 2 percent on their meals.

The tax would apply to any transaction in which food and beverage is furnished, prepared or served and would raise the food-and-beverage tax on a $50 meal from 50 cents to $1. 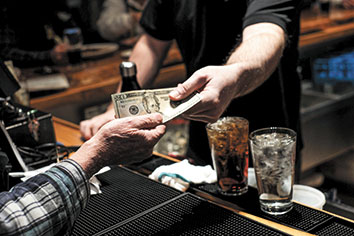 If Whitestown succeeds in instituting a 1 percent food-and-beverage tax, diners at year-old Moontown Brewing Co. will pay an extra 50 cents on a $50 bill. (IBJ photo/Eric Learned)

Meanwhile, the Indiana House approved a similar measure, voting 67-31 to advance House Bill 1402. Both bills have now switched chambers; the Senate bill has been assigned to the House Ways and Means Committee.

Greenwood and Danville officials recently passed resolutions requesting the ability to levy the tax, and Whitestown piggybacked on their legislation.

The tax would have the biggest impact in Greenwood, where it could generate $2.5 million in 2020 and $2.6 million in 2021, according to a Legislative Services Agency analysis. For years, Greenwood has unsuccessfully lobbied for a food-and-beverage tax to generate extra funding for public safety.

In Whitestown, the tax could generate about $223,400 in 2020 and $233,800 in 2021. The town’s director of public relations, Tanya Sumner, said local officials want to use the money to fund projects that improve infrastructure and quality of life.

Among local cities and towns with a 1 percent food-and-beverage tax are Carmel, Noblesville and Westfield in Hamilton County and Lebanon and Zionsville in Boone County. In consolidated Indianapolis/Marion County, a 2 percent food and beverage tax applies.

The bills would give Whitestown, Danville and Greenwood authority to levy the tax, but their local governing bodies would also need to approve it. The process requires a local public hearing.

Boone County implemented the tax in August 2005 after lawmakers passed legislation that allowed the counties around Indianapolis to charge a 1 percent tax to help fund a new stadium for the Indianapolis Colts. Half of the tax’s proceeds goes to financing the stadium and the other half to county coffers to beef up local budgets. 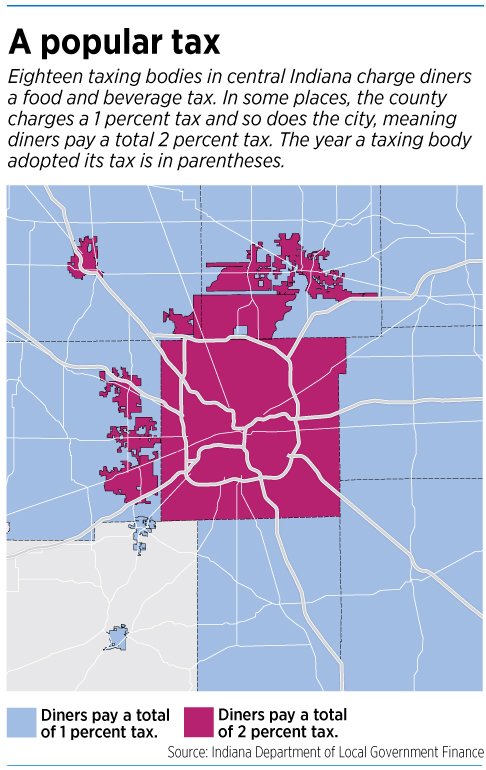 At that time, lawmakers also allowed some municipalities to impose the tax. Zionsville and Lebanon began charging the tax in November 2005, meaning many restaurants in Boone County already charge a 2 percent tax. The same is true in Hamilton County, where three of the four cities charge a tax on top of the county’s tax.

In 2016, the Whitestown Town Council passed a resolution supporting a bill that would have given all municipalities the option to impose a 1 percent food-and-beverage tax without having to first get permission from the Legislature. The bill was introduced in 2017 but failed.

With that growth has come an influx of retail and restaurants, which draw visitors from across the county and region. Over the past four years, dozens of restaurants have opened in the Anson development near Interstate 65. Now, retail is exploding there, too. A Hobby Lobby opened in late February, and in coming weeks, TJ Maxx and Burlington will open in the Shoppes at Whitestown, followed by an Ashley Furniture HomeStore and a Kirkland’s.

In addition to the new restaurants and retail, Whitestown is also preparing to become home to Little League International’s Central Region Headquarters. The $5 million headquarters and multi-diamond baseball facility will host Little League’s annual Great Lakes and Midwest Region baseball tournaments as well as the Central Region softball tournament, bringing hundreds of tourists who will eat at local restaurants and stay in local hotels.

“As we attract more businesses, retail, hotels and the Little League headquarters to town, it’s important that we capture that revenue from our visitors to help us maintain the infrastructure that all of those extra vehicles will be using,” Sumner said.

At least one local restaurant owner has mixed opinions about the tax. Bobby Mattingly, co-owner and general manager of Moontown Brewing Co., which opened in Whitestown a year ago, said one of the perks of opening the restaurant and brewery in Whitestown was that the town didn’t have the extra 1 percent dining tax collected by its neighbors.

“It is a little concerning because we don’t want that to turn away guests that would come in,” he said. “I don’t see it being a huge issue, but it may surprise some people.”

At the same time, Mattingly said, Moontown Brewing Co. is a destination in Whitestown, so he doesn’t expect customers to be overly worried about paying the extra 1 percent.

The town has done a nice job of trying to build up the community and make it a place people want to visit, he said, citing a park currently under construction on Main Street. If the town uses the extra funding to support more projects like that, Mattingly said, he can support the tax.

But whether the legislation succeeds remains to be seen.

Rep. Jeff Thompson, R-Lizton, who serves on the House Ways & Means Committee and represents portions of Whitestown, said the bill is likely to pass.

But, he added, similar measures have failed. In 2016, for example, lawmakers rejected a proposal that would have given several entities, including Greenwood, permission to impose the tax.•