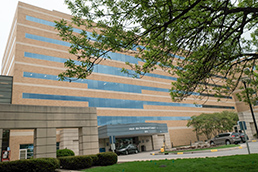 The Methodist Professional Center II on Capitol Avenue was constructed in 1992 and is fully leased. (IBJ photo/Eric Learned)

The seller was The Sanders Trust of Birmingham, Alabama. The trust—co-founded by Hall of Fame National Football League quarterback Bart Starr—acquired the building in 2009.

Many investors flock to medical office properties, drawn in part by their stable tenant bases. The Methodist office building was 100 percent leased when The Sanders Trust bought it, and it is fully leased today.

Healthcare Realty Trust is a national heavyweight in health care real estate. It owns more than 200 properties in 27 states, including several others in Indianapolis.•