Marijuana legalization is enjoying a surge of support, both among American voters and 2020 presidential candidates. But that enthusiasm has led to some hasty claims about the drug’s usefulness that aren’t borne out by research.

Five years ago—as the country’s opioid crisis had just started garnering national attention—a study got a lot of buzz suggesting that opioid overdose deaths were 25 percent lower in states that had given the nod to medical marijuana. At the time, policymakers were starting to search for the best ways to respond to the crisis, and the public was just starting to learn about the so-called “Lazarus drug” Naloxone, which rapidly reverses opioid overdoses. 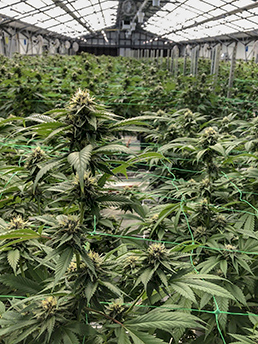 The spread of legalized marijuana has led to a proliferation of cannabis farms in the United States, including 3 Boys Farm in Florida. (Photo courtesy of SOL Global Investments Corp.)

But now, Stanford University researchers have released a new study finding the exact opposite: States that allowed marijuana use for medical purposes actually had 23 percent more deaths from opioid overdoses, when they looked over a longer period of time.

The new work appears to be a cautionary tale about inferring cause and effect—wanting research to show something it can’t because the nation is in the grip of a deadly opioid epidemic or because there is money to be made by offering possible solutions.

It was intriguing to think that the problem of opioid overdoses, which have taken more than American 400,000 lives in the past two decades, could have such a simple solution upon which states were already embarking. Thirty-three states plus the District of Columbia now allow the use of medical marijuana. Last week, New Mexico joined New York, New Jersey and Pennsylvania in approving it specifically for patients addicted to opioids.

(Although not every state is embracing medical marijuana products. Iowa Gov. Kim Reynolds, a Republican, vetoed a bill last month that would have expanded a medical cannabidiol program allowing capsules and extracts, saying the state needs to “proceed cautiously” on changes.)

Mayor Pete Buttigieg of South Bend, who is seeking the Democratic presidential nomination, criticized the veto on social media: “Thousands of patients in Iowa are struggling thanks to a limited medical marijuana program that doesn’t meet their health care needs—the governor’s veto will only prolong their suffering.”

The correlation between medical marijuana and lower opioid overdose seemed to be confirmed in a 2014 study by Johns Hopkins researchers, who found 24.8 percent fewer deaths in the period from 1999 to 2010 after states passed laws legalizing medical marijuana. The Stanford researchers came up with very similar results while looking at the same time period, but the data reversed once they extended the analysis to 2017.

“A lot of people interpreted the first study as causal because it’s congenial to their goals,” Chelsea Shover, a postdoctoral fellow in psychiatry who was part of the Stanford research team, said. “It did not say that one is causing the other.”

“I wish it were true,” she added. “I wish that passing medical cannabis [laws] would solve the opioid crisis. But the evidence doesn’t support that.”

Shover said the conflicting results could be related to the fact that only 13 states had medical marijuana laws for the initial study, and many of them were in the West, where the opioid epidemic arrived later. Many more states had approved medical use of marijuana by the end of the study time period, leaving researchers with few states to use for comparison.

Of course, marijuana could still hold some value for trying to combat opioid abuse—especially given the public’s increasing acceptance of it. Because it’s useful as a nonaddictive pain reliever, it can give doctors better options when seeking relief for their patients.

Three in four Americans back medical marijuana, although it’s not yet recognized by the federal government as a medically beneficial drug. Support for recreational use of marijuana has also rapidly risen, with two out of three people now in favor of legalizing it broadly.

The Democratic presidential candidates have been paying close attention to public opinion. The field of 2020 candidates nearly all agree marijuana should be decriminalized.

Former Vice President Joe Biden, who for years opposed the idea, said last month that people shouldn’t be prosecuted for smoking marijuana and added that as president he would allow states to keep making their own decisions on the matter. Even former Colorado Gov. John Hickenlooper, one of the moderate Democrats in the race, signed some marijuana laws in his state after initially characterizing the legalization of recreational pot as “reckless.”•