Tucked behind a Ford dealer in Fishers stands a drab, steel building that would make a fine home for a plumbing contractor.

But inside are chemists in white lab coats, using a mass spectrometer to measure atom-size particles. They’re
making peptides—chains of usually three to 70 amino acids used by pharmaceutical companies to develop the next miracle
drug.

Recently, the eight-employee Midwest Bio-Tech even synthesized peptides used by the Centers for Disease
Control to develop the H1N1 flu vaccine.

“Peptide groups at the large companies are being downsized. They’ve
found it became cheaper to outsource the peptide,” said William Scott Dodson, chief science officer for Midwest Bio-tech.
He should know, having once operated such a lab for Amgen, in Colorado.

Central Indiana companies such as Midwest
Bio-tech are tapping an outsourcing trend among pharmaceutical and medical-device giants—and even among upstarts whose
investors want results pronto. Pharmaceutical firms large and small are under more pressure than ever to cut costs and speed
product development.

Closer to home, Eli
Lilly and Co. announced last month that it will cut 5,000 jobs and reorganize its business units, under increasing pressure
to boost its product pipeline.

“As companies like Lilly shed staff, you’re going to see more and
more of these small companies spring up because there’s a lot of talent out there that’s not ready to play shuffleboard
in Florida,” said Ron Zimmerman, who co-founded contract manufacturer Elona Biotechnologies in Greenwood.

The firm, located north of Indianapolis International Airport, has grown
to 155 employees from 12 a decade ago and will do $27 million in business this year, said co-founder Robert Chew.

Over the years, the firm has worked for giants from Lilly to Merck to GlaxoSmithKline.

“They’re
working for people all over the country … . There are probably 30 other [contract service firms] just like him. It’s
a silent sector here in a sense,” said David Johnson, president and CEO of Indiana life sciences initiative BioCrossroads.

Just how many of these small, so-called contract service providers
there are in central Indiana is hard to say.

BioCrossroads is trying to catalog them through its “Linx”
initiative, which is also intended to promote business between contract service providers and pharmaceutical and medical-device
makers.

So low-profile are some of the firms, even in one’s own back yard, that Linx has yet to pick up
Midwest Bio-Tech on its Web database.

BioCrossroads estimates the firms employ 6,800 people in the state. How
much they generate in sales is a fuzzier question. 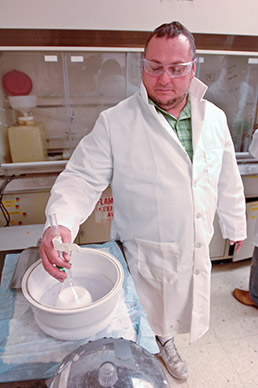 Nationally, though, the use of third-party vendors “is increasing
at unprecedented rates,” BioCrossroads said in a report last year on the sector. Contract service
providers are growing 14 percent to 16 percent—exceeding 20 percent in some segments, the report said.

Nationally, BioCrossroads pegs the segment at 1,100 firms generating $14 billion a year in revenue.

One of the
best-known contract service firms in the Indianapolis area is AIT Laboratories, a leading forensics toxicology lab that also
provides testing for doctors, hospitals and pharmaceutical companies. AIT made news this summer for other reasons; founder
and CEO Michael A. Evans in June dished out more than $2 million to his 300 employees as part of a profit-sharing plan, and
the following month sold them his fast-growing company through an employee stock ownership plan.

Contract firms run the gamut from tiny to large.

Cook Pharmica was launched in 2004 when parent Cook Medical Group decided to get back into the
contract manufacturing business. Its customers range from small companies with just a couple of employees to very large ones,
said President Ted Green.

The company could double employment to 300 when it completes an $80 million formulation,
filling and finishing facility in Bloomington next year. It will fill vials and syringes with vaccines and other things used
in clinics and hospitals. Green said the unit should fill out Cook’s capabilities as a fully integrated contract manufacturer—making
it more attractive to potential customers by being able to serve them from under one roof.

Many of the firms
have unlikely beginnings. AIT’s Evans was a toxicology professor who, after 20 years in academia, got the entrepreneurship
bug.

Midwest Bio-Tech started out as a peptide distributor. Eleven years ago, Greg Lupo and his father, Louis,
decided to enter the manufacturing end of the business, with his father telling him their company couldn’t continue
as a middleman between peptide producers and pharmaceutical companies forever.

Greg Lupo, now CEO, hired chemists
like Dodson, a native of upstate New York with a hankering for heavy-metal music.

The quirky nature of contractors
like Midwest Bio-Tech is apparent in the shrine to the genre that lurks behind doors seldom penetrated by the general public.

Scrawled onto a plexiglass shield in a lab is “SLAYER” in honor of the band.

Dodson and
others here formed their own heavy-metal band, “Active Live Infection.” Lupo keeps them happy—installing
speakers in the lab ceiling to allow them to rock as they make their rock-like peptides. Dodson, who describes himself as
a “straightforward analytical chemist,” said he figures the music can’t help but excite the molecules.

But these chemists aren’t mere head bangers. Over the years, they’ve curried the favor of some of the
nation’s biggest drug companies as clients. Midwest’s capabilities also caught wind of the CDC, which this year
has been scrambling on a vaccine for H1N1.

“We got an e-mail that said, ‘This is a national security
issue,’” said Lupo, recalling how the staff dropped everything it was doing. In an upcoming issue of Analytical
Chemistry, CDC scientists outline Midwest Bio-Tech’s work and mention influenza peptide synthesis work performed
by the company.

“I really feel we helped to accelerate the formulation of vaccines,” said science
officer Dodson.

In May, the 10-year-old company launched two subsidiaries: R&D Enterprises and Zimmerman Biotechnologies.

R&D developed a patented process to produce human insulin and human growth hormone easier and cheaper than is
currently being done by branded companies. The process is so efficient that Zimmerman boasts R&D can match costs with
Indian and Chinese companies.

The other subsidiary, Zimmerman Biotechnologies, will manufacture the generic biologics
created with Elona’s expertise.

Zimmerman hopes to gain federal approval to make the firm’s own insulin
by 2011 and growth hormone shortly thereafter.

The move is risky, Zimmerman said, but one he feels is worthwhile
given the potential to sell generic products, particularly as patents on such products expire and Congress increasingly looks
to expand availability of generics.

An estimated $100 billion of
pharmaceuticals are coming off patent in the next five years, said BioCrossroads’ Johnson. The opportunity for most
contract service providers will be in helping big pharmaceutical companies get new products to market faster and extend the
usable life of their patents.

BioCrossroads said the major opportunities in the Indianapolis area are:

• pre-clinical services,
such as toxicology;

• discovery services, such as studying what the body does to a drug, a field called
pharmacokinetics; and

“The closer you
get up the line toward discovery, the higher the value is service,” Johnson said.

But that can be challenging.
The BioCrossroads report noted many pharmaceutical companies have “an institutionalized aversion to relinquishing control
necessary for maximizing outsourcing potential and managing relationships” with contract service providers.

Indeed, while Lupo’s company operates at “the very beginning of what some scientist thinks of a protein in
his head,” a pharmaceutical company will often pull back from further work on a peptide out of fear the outside world
will figure out what the drug company is trying to synthesize and ultimately develop a competing product.

And
despite what Lupo contends is a strong business case for a drugmaker to outsource additional work to his firm, cutting through
corporate bureaucracy can be a challenge. In some cases, insiders at a company’s laboratories appear to intentionally
shun outside contracting opportunities if only for the sake of their own job security.•