The new president of Community Hospital East says her job is all about health—the health of not just patients, but
the entire neighborhood.

That means removing obstacles to better care both inside and outside hospital walls.

Externally, Dr. Robin Ledyard, 49, points to such hospital activities as improving area homes in conjunction with
Habitat for Humanity.

“We are not gentrifying the houses, just making them livable,” said Ledyard,
who has volunteered with various housing coalitions. Many of the patients served by the 250-bed Community East rely on public
funding for their medical care.

She cites the hospital’s support of median beautification along Emerson
Avenue, near the hospital, as another example of the type of nontraditional neighborhood outreach she wants to continue. These
may seem like small gestures, but they contribute to the overall well-being of a community, which translates to healthy humans,
Ledyard said.

Within the hospital, she wants to break down communication barriers among hospital units that may
slow the delivery of care to patients. For example, she wants to make sure employees take full advantage of electronic record-sharing
among Community Health Network’s five hospitals, 200 primary-care physicians and many specialists.

Ledyard’s
approach to her new role isn’t surprising, given her most recent position as medical director of Community Health Network’s
community benefit program. In that job, she helped develop the Jane Pauley Community Health Center, which opened last month.
Located in Renaissance School near 30th Street and Post Road, an area that is medically under-served, the 1,600-square-foot
outreach facility is a cooperative venture between Community and Warren Township schools. TV journalist Jane Pauley graduated
from Warren Township High School. 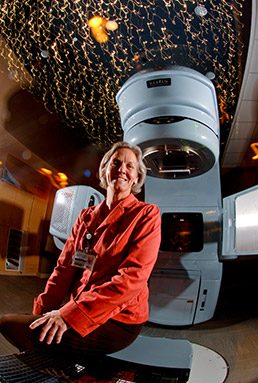 Hospitals
wrestle with, “How can we provide access at all levels?” from the emergency rooms to preventive care, said Ledyard,
who thinks the Pauley center is one answer. The primary-care facility is expected to reduce the number of emergency room visits,
one of the most expensive ways to treat patients.

Controlling expenses is a major challenge for the hospital, whose patient population is unlikely
to have health insurance. Sixty-eight percent of Community East’s patients rely on Medicare or Medicaid or pay for their
care themselves, compared to 43 percent at Community North and 54 percent at Community South.

Community East
has been operating at a deficit (the hospital would not share exact figures) through a long recovery from the loss of its
open-heart surgery specialty about six years ago.

“It was the right decision at the time, but it changed
the face of the facility,” Ledyard said of the loss. As a result, the hospital has honed its focus on its well-known
unit for acute brain injuries and diseases and its Hook Rehabilitation Center and Gallahue Mental Health Center.

Last year, the hospital admitted 9,963 patients, including 610 for its rehab unit. It tallied 207,000 outpatient visits.
In spite of its ongoing financial challenges, the hospital has invested $10 million in renovations to its buildings and grounds.

The demographics of the area have changed a lot since the hospital was built in 1956 through a massive fund-raising
effort of local residents and businesses. Vice President Richard M. Nixon attended the groundbreaking for the facility, which
was among the first in the country to have air-conditioning and oxygen plumbed into the building.

A
scientist from the start

Just a few years after the hospital opened, Ledyard
was born into a blue-collar family in Shelbyville. She loved science as a child and eventually majored in biology at Indiana
University. She had planned to become a research scientist, but the IU School of Medicine recruited her.

Her
career has included family medicine, wellness and public health policy and management, as well as teaching at IU and in several
hospitals’ medical education departments. Besides her medical degree, Ledyard holds a master’s degree from IU
in public health, where she researched school-based wellness centers for her master’s thesis.

The breadth
of her career makes her well-suited for her new post at Community East, said Dr. Judith Monroe, Indiana commissioner of health
and a longtime mentor to Ledyard.

“She has a great understanding of the challenges facing medicine,”
Monroe said. “She lives in the real world.”

Among Ledyard’s strengths are problem-solving and
a solid understanding of hospital and health care systems, Monroe added. The two physicians met in the 1990s when they were
the state’s only women heading family medicine residency units in hospitals (Monroe was then at St. Vincent Hospital).
Together, they published a research paper on perimenopause, the time leading up to menopause.

Ledyard’s
volunteer experience has nourished her passion for providing health services to the poor. She is a board member of the Genneserat
Free Clinic in Indianapolis and, when living in Michigan, volunteered as the staff physician at two migrant health clinics.
Ledyard also founded and directed the Indiana Breastfeeding Task Force Initiative.

Her husband, Dr. Tom Ledyard,
is on the faculty of Community Health Network’s family medicine residency program. She has two daughters, ages 20 and
16.

Because of its relatively
poor population, Community East will be especially affected by some population and health care trends, Ledyard said.

She expects there to be more demand for end-of-life care as the population ages, where death and dying “can be
discussed openly and honestly. You have to ask how [a patient] feels about death and dying, how you feel about efforts to
prolong life. That’s a difficult conversation that requires a relationship between doctor and their patient,”
something that is often lacking among people without primary-care physicians, she said.

Ledyard is somewhat encouraged by the current conversation on health care reform, especially
the focus on delivering high-quality, efficient care in a safe environment. This emphasis relies heavily on primary medical
care, something she hopes will elevate its stature among students.

As for her own ongoing education, Ledyard
said she will continue to practice medicine. She may sit at the top of the administrative flow chart, but she also wants to
know what’s happening on the ground, so she can keep an eye out for any walls that need breaking down.•