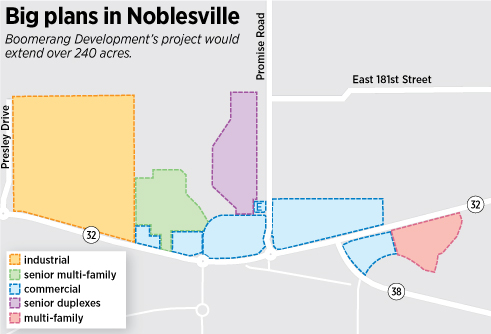 Fishers-based Boomerang Development will serve as the master developer of a $157 million, 240-acre proposed project that’s expected to bring more industrial, residential and commercial development to the east side of Noblesville.

The massive project would take place on largely undeveloped land near the State Road 32/38 split. The project’s boundaries are generally east of Presley Drive and north of state roads 32 and 28.

Specific details of the project, which is being called Northeast Business Park and Crossroads, are still being considered, but the 240 acres would be divided into five areas: Industrial, commercial, senior multifamily, multifamily and senior two-family attached.

Corby Thompson, president of Boomerang Development and a prolific north-side developer, told IBJ the various pieces of the project would likely be constructed by six different builders.

More than 100 acres of the project would be dedicated to industrial and business park development and 40 would be reserved for other commercial development such as retail or office.

Construction would come in phases, likely starting with the multifamily housing for seniors, which is needed in Noblesville, he said. Industrial development would likely come before other commercial development. Project plans call for some of the senior multifamily and general multifamily projects to be completed by 2021.

Boomerang plans to spend about $9.6 million of its own money to address significant infrastructure needs, including drainage and a sanitary sewer extension, in the area, Thompson said.

The area south of the State Road 32/38 split has seen development for years, but it stops north of the corridor because the area lacks the infrastructure to support large development, Thompson said. The road infrastructure is already in place, so addressing those other needs will allow what’s largely farmland now to accommodate other projects.

Once completed, the project would increase the area’s assessed value from about $2.2 million to $157.8 million, Boomerang has estimated.

Boomerang has asked the city to issue a $6.3 million tax increment financing bond and pledge a portion of TIF funds to help secure a developer-backed bond that would be used to pay for the infrastructure improvements. The improvements also includes the rehabilitation of an 1880s farmhouse west of Union Chapel Road for commercial use.

Specific details of the project, such as what type of industrial development would be allowed and the density of the residential projects, will be worked out in conjunction with the city, Steve Hadin, an attorney at Faegre Baker Daniels representing Boomerang, said.

The project was introduced to the Noblesville City Council this week. The development agreement will be discussed at an upcoming council finance committee meeting before returning to the city council for possible final approval later this month.

Thompson said he hopes the project serves as a template for more development north of the site and even in Cicero, other areas that also lack the infrastructure required to support large-scale development.

The project area does not include the 50-acre Stonycreek Farm Nursery & Landscaping property that Thompson put under contract earlier this year. The landmark farm on SR 38 is just south of part of the proposed development.