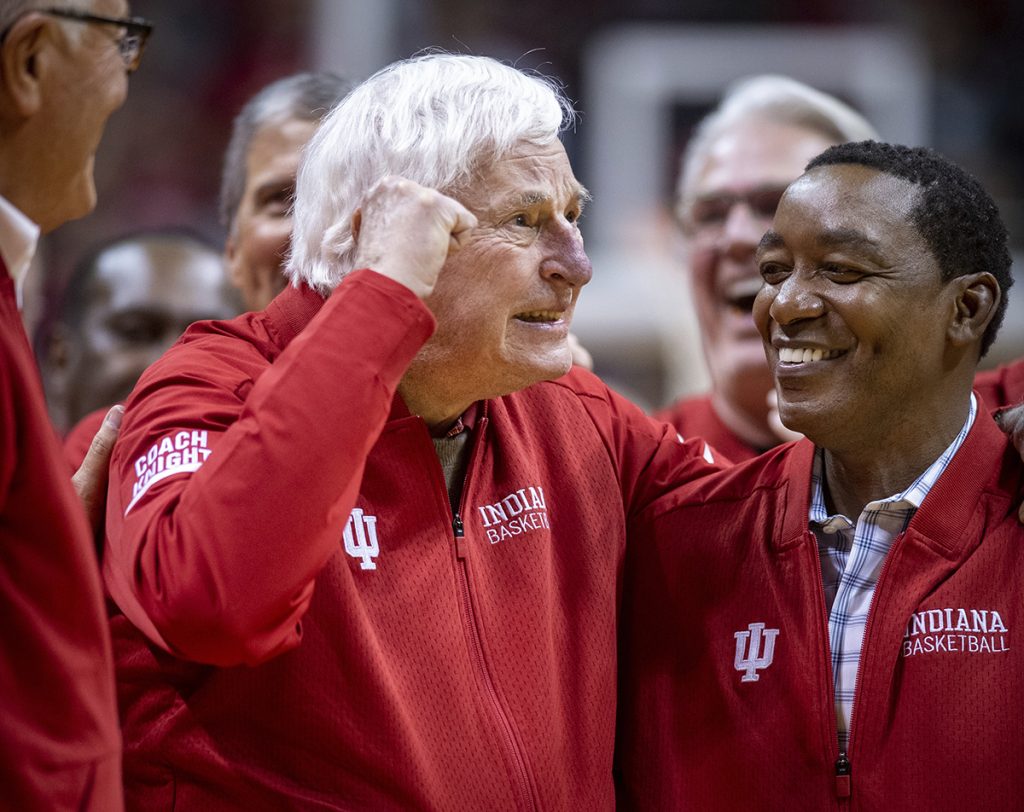 Former Indiana basketball head coach Bobby Knight, left, makes his first appearance at IU's Assembly Hall since his dismissal in September 2000. Knight, along with former player Isiah Thomas, right, are on the court during a ceremony for the 1980 Big Ten championship team. (AP Photo/Doug McSchooler)

It seemed as if he never left.

When the former Indiana Hoosiers coach walked through the tunnel Saturday and onto his old court for the first time since his firing in September 2000, the crowd went wild — chanting his name, roaring with approval, thanking him for all the success and banners he brought to Bloomington.

“It was one of the greatest and most emotional things for me,” said former player Randy Wittman, who had a key role in the reunion. “I don’t know if we’ll see something like this again in college basketball. When he moved back here, I told him you’re back here because this is where you belong.”

He walked in with his son, Pat. He hugged Isiah Thomas. He was assisted into the arena by Quinn Buckner. And the 79-year-old Knight reveled in the moment, pumping his fist, pretending to direct Scott May in a practice drill and even leading fans in a chorus of “de-fense, de-fense.”

No, he didn’t wear his trademark red sweater or throw a chair. But he did appear to get a little misty-eyed as the fans cheered.

“We love you, Bobby,” one shouted.

Knight did not speak to the crowd over the public address system. He didn’t need to.

Everyone in attendance understood what the combustible coach had on his 29-season resume: A school record 662 victories, 11 Big Ten championships, five Final Four appearances and, yes, three national titles.

They knew some of the stories, too — the Olympic gold medal he won in 1984 with Michael Jordan after cutting Charles Barkley; the infamous chair-throwing incident in 1985; and the firing that took place Sept. 10, 2000, causing the rift between Knight and the university.

University officials put Knight on a zero-tolerance policy earlier that year following an investigation into whether he had choked a former player, the late Neil Reed, during a practice. Then, in September, a student accused Knight of grabbing him in a hallway.

That was his last public appearance in the building — until Saturday.

Despite the tireless efforts of university officials, led by athletic director Fred Glass, Knight refused every chance to come back.

He skipped championship team reunions and even declined to attend his own induction into the school’s athletic Hall of Fame in 2009 because he said he didn’t want his presence to detract from other class members.

The thaw began in earnest last spring when he made a surprise appearance at an Indiana baseball game. In July, he bought a house three miles from the basketball arena.

“I visited Coach in Montana and Texas,” former player Mike Woodson said. “This is home. I’ve spent the last month back here in Bloomington with him and had dinners a few times with him and we were happy as hell he wanted to come back.”

Knight hadn’t exactly been invisible around Bloomington or the state after the firing.

He took the Texas Tech job, and then retired in 2008 with a then-record 902 career wins. He worked on ESPN as a color analyst. He gave speeches, attended fundraisers, signed autographs and attended basketball games and practices around Indiana.

He just didn’t associate himself with the Hoosiers.

He also spoke at a Donald Trump rally in Grand Rapids, Michigan, in October 2016 and at another Trump rally on the south side of Indianapolis in November 2018.

And yet everyone associated with Indiana basketball still had one question: Will he ever come back?

“When he moved back here, I knew he was in a good place,” Wittman said. “I knew he was happy here, living, and I told him you belong here.”

It didn’t take long for the rumors to start.

Some expected his return to come against Ohio State, his alma mater, on Jan. 11. Instead, he attended a game that day at Marian University, an NAIA school in Indianapolis, where another former player, Steve Downing, is the athletic director.

But with the Hoosiers playing their biggest rival, Purdue, longtime friend and rival Gene Keady seated in the front row and his 1980 Big Ten championship team being honored Saturday, Knight made it to Assembly Hall and delivered one of his traditional pregame speeches to the current Hoosiers before their 74-62 loss to the Boilermakers.

“I was standing there and he was coach Knight,” Wittman said. “It was like he hadn’t left that locker room. The words he gave to those players before they went out on the floor, it was fabulous.”