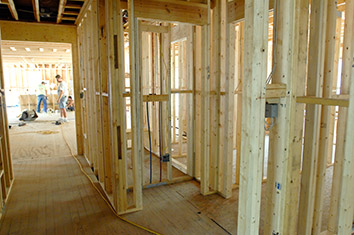 Applications for newly built houses are continuing to trail last year’s pace in central Indiana, but homebuilders remain busy, according to the Builders Association of Greater Indianapolis.

Builders in the nine-county Indianapolis area filed 850 single-family building permits in June, down 18% from the same month of 2021. Permit filings have fallen on a year-over-year basis for the past six months and in nine of the past 11 months.

Builders are coming off their busiest year since 2005, but 2022 hasn’t seen a positive month in filings yet. Builders have filed 4,971 permits during the first half of the year, a 13% decrease from the same period a year ago.

Despite the decrease in permit filings, local homebuilders and suppliers remain busier than ever, according to BAGI CEO Steve Lains.

“While sale leads have slowed, builders remain busy finishing homes previously sold,” Lains said in written remarks. “Most builders have been leery of beginning too many new homes at one time as the construction trades and suppliers struggle to keep up with homes already sold and contracted.”

Lains said that builders remain optimistic because an increase in land development is encouraging for new home construction activity.

– Hamilton County, typically the busiest area county for home construction, saw filings sink 27% in June, from 382 to 280. Year-to-date filings are down 25% in the county.

– Johnson County experienced an 18% rise in filings last month, to 97.