Yet despite the backing for these measures, Biden’s approval rating has ticked down to a new low, driven largely by more negative views among Democrats and independents, according to a Washington Post-ABC News poll.

Overall, the survey offers a set of harsh judgments about the president’s performance and the state of the economy. Together, they send a stark warning to Democrats about their prospects in the 2022 midterm contests.

Recent losses in the Virginia elections and a close call in the New Jersey gubernatorial race have put Democrats on edge, with reason. The Post-ABC poll finds that, if elections were held today, 46% of adults overall would back the Republican candidate for Congress and 43% would support the Democratic candidate. Among registered voters, the GOP advantage goes to 51% vs. 41% for Democrats, a historically strong result for Republicans on this measure. 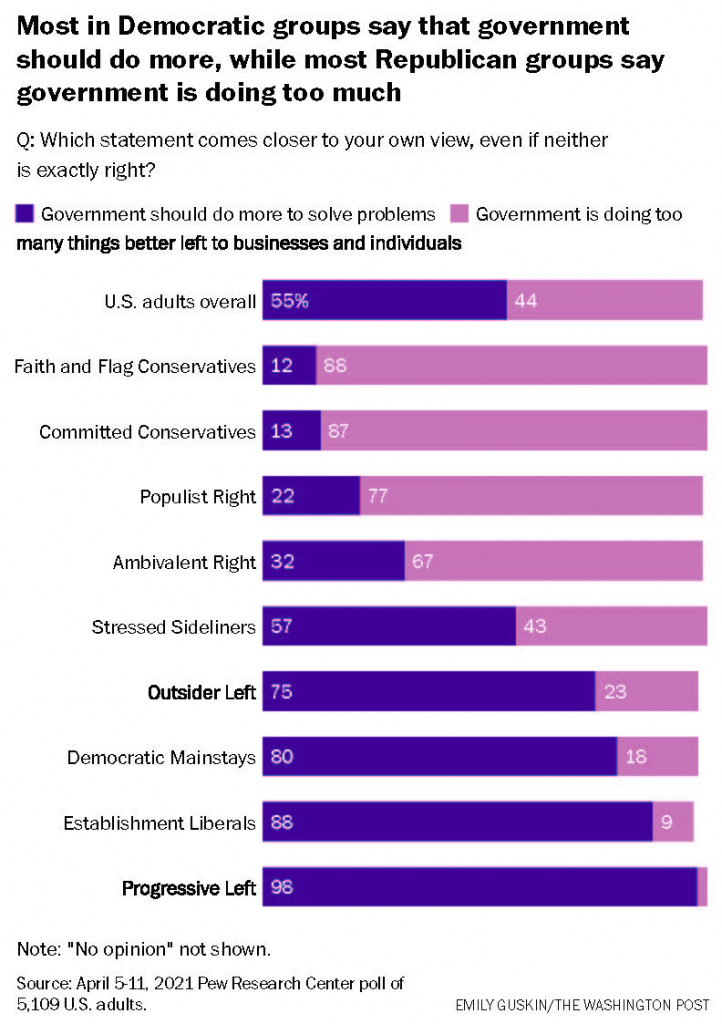 The Post-ABC poll also showcases Americans’ current pessimism: Despite a mix of economic signals—falling unemployment and rising prices—70% rate the economy negatively, including 38% who say it is in “poor” condition. About half of Americans overall and political independents blame Biden for fast-rising inflation, and more than six in 10 Americans say he has not accomplished much after 10 months in office, including 71% of independents.

White House officials have said that they recognize the challenges ahead for Biden and the Democratic Party; however, they’ve said that they are optimistic that conditions in the country, including the economy and the pandemic, will gradually improve next year and that, as general frustrations ease, the president’s standing will rise. At this point, however, Democrats acknowledge that they are at significant risk of losing their narrow majorities in the House and Senate in next November’s elections and that, under current conditions, the losses could be substantial.

Education issues, including the role of parents in schools and the way the United States’ racial history is taught, were credited with helping Gov.-elect Glenn Youngkin, a Republican, defeat Terry McAuliffe, a Democrat, in Virginia. Republicans have indicated that they will try to make education and parents’ rights a prominent part of their message and strategy next year.

The poll finds overwhelming support for parents having a say in what their children’s schools teach, including nearly half of adults saying parents should have “a lot” of say on matters of curriculum. The findings broke largely along party lines, with those who say “a lot” supporting Republicans by big margins.

Overall, Americans are divided over which party they trust to handle education, with 44% choosing Democrats and 41% choosing Republicans. That represents a significant weakening in what has historically been an advantage for Democrats on this question.

On the issue of race and schools, Youngkin and other Republicans have declared their opposition to the teaching of critical race theory, an intellectual movement that examines the way policies and laws perpetuate systemic racism, and although this is not part of the curriculum in Virginia, it has become emblematic of a broader rallying cry among conservatives. Overall, 7 in 10 Americans say public schools should teach “a great deal” or “a good amount” about how the history of racism affects the United States today. Yet that remains a polarized view. More than 9 in 10 Democrats and more than 7 in 10 independents say schools should teach about the effects of racism. Just over 4 in 10 Republicans agree, with more than half instead favoring teaching the effects of racism “not much” or “not at all.”

In a sharply divided country, Biden began his presidency with a slight majority approving of his performance, but his standing has steadily dropped since midsummer. His overall approval rating now stands at 41%, with 53% saying they disapprove. Those who say they strongly disapprove of the way he has handled his job represent 44% of adults. Strong disapproval peaks at 80% among Republicans, though 45% of independents strongly disapprove of Biden’s performance, as do 48% of suburbanites and 44% of White college graduates. Biden’s overall approval rating is down from 50% in June and 44% in September, although his current standing is not statistically different from two months ago.

Biden’s popularity also has slumped among his own base. In June, 94% of Democrats approved of the way he was handling his job compared with 3% who disapproved. Today, 80% of Democrats are positive and 16% are negative. Barely 4 in 10 Democrats strongly approve of Biden today, down from about 7 in 10 who did so in June.

Biden’s approval rating on the economy has also tumbled and now stands at 39% positive and 55% negative. That 16-point net negative rating compares with a September poll in which 45% said they approved of his handling of the economy and an April poll in which 52% approved.

The economic rating of Biden’s performance correlates with a gloomy assessment of the economy itself. Last month produced 531,000 more jobs and brought reports of higher wages. At the same time, inflation hit a 30-year high, and rising prices for food, gasoline and other products appear to be shaping Americans’ perceptions.

The Post-ABC poll also finds that perceptions of Biden’s handling of the coronavirus pandemic, which, early in his administration, was one of his most positive assets, has continued on a downward trend, tracking the effect of the highly contagious delta variant that set back a return to more normal life.

Today, Americans are roughly divided on Biden’s handling of the pandemic (47% approve, while 49% disapprove). Two months ago, 52% approved of his handling of the pandemic compared with 41% who disapproved. In June and in April, he was in positive territory by a 2-to-1 margin. Biden’s current ratings mirror the country’s deep partisan divisions, with similar majorities of Democrats approving and Republicans disapproving, while independents lean negative, 52% to 44%.

Passing popular laws marks a key opportunity for Biden to boost his sagging popularity, but that depends on a more effective communications strategy and results that people can see.

Congress has now approved two of the three major initiatives proposed by the president, the infrastructure package and, earlier in the year, a nearly $2 trillion stimulus package. Efforts to ramp up vaccinations to stem the pandemic were successful into late spring before they hit roadblocks among Americans hesitant to get or resistant to getting vaccinated.

But recent months have been marked by Democratic infighting on Capitol Hill, criticism by Republicans of the president’s vaccinate-or-test requirement for bigger companies and other controversies. Today, just over one-third of Americans say Biden has accomplished a great deal or a good amount during his time in office, with more than 6 in 10 saying he has accomplished “not much” or “little or nothing.”

Similarly, 31% of Americans say Biden is keeping most of his major campaign promises, while 51% say he is not. That finding, as with the question about accomplishments, is about the same as it was for former president Donald Trump at this point in his presidency.

Yet the poll finds majority support for his biggest plans. The Post-ABC poll finds that 63% of Americans support Washington spending $1 trillion “on roads, bridges and other infrastructure,” while 58% support spending roughly $2 trillion to “address climate change and to create or expand preschool, health care and other social programs.”

But even with that overall support for the president’s spending initiatives, nearly 6 in 10 Americans also say they are either very or at least somewhat concerned that Biden will do too much to increase the size and role of government in U.S. society.

Clear partisan divisions exist on concerns about the government’s size and scope, with nearly 9 in 10 Republicans saying they are concerned about this, while 7 in 10 Democrats say they are not. But 3 in 10 Democrats register some level of concern, and more than 6 in 10 independents also say they are worried.

Disgruntlement with the opposition party is strong, but partisans also are not uniformly happy with their own side. One-quarter of Democrats say their party is out of touch, and the same portion of Republicans say the GOP is out of touch. Clear majorities of independents see both parties as being out of touch. 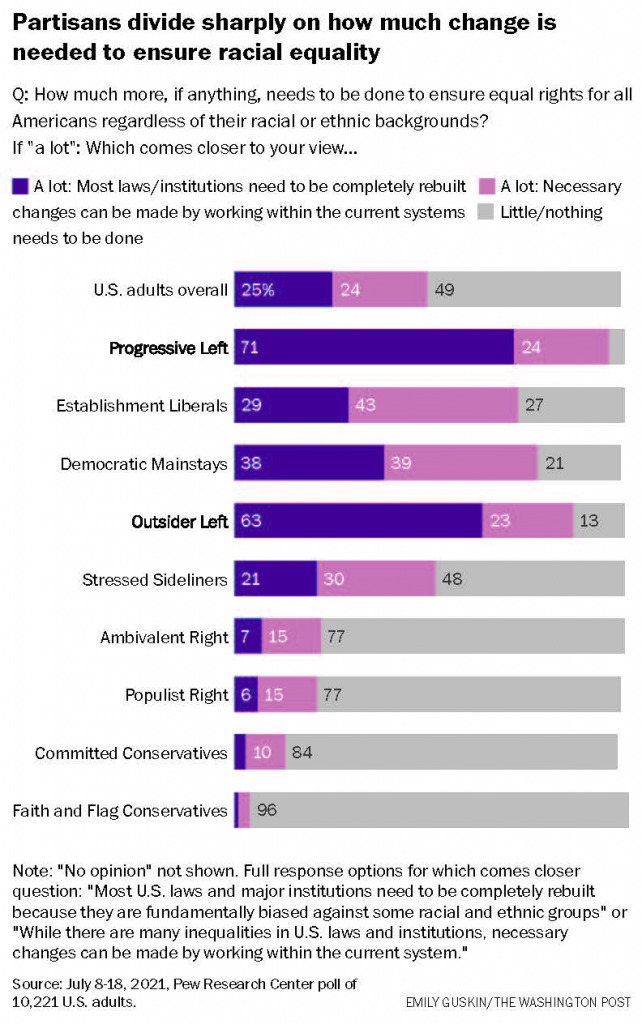 The education issue’s move to the forefront of the political debate has been propelled by colliding concerns about school shutdowns during the pandemic, vaccine requirements and mask mandates as schools reopened, and curriculum issues, principally over race and racial injustice. School board meetings have become battlegrounds in some places, with angry protests gaining further traction on cable news.

McAuliffe gave Youngkin an opening to press the issue in Virginia when he said at a debate, “I don’t think parents should be telling schools what they should teach.” That put him at odds with the views of most people. The Post-ABC poll finds that just over 8 in 10 nationally say parents should have at least some say in what their child’s school teaches, a finding that is nearly identical to the exit poll results in Virginia.

On pandemic-related concerns, a bare majority of Americans say the policies of their local school districts related to the pandemic were about right; one-quarter say they were too strict, and not quite 1 in 6 say they were not strict enough.

The Post-ABC poll finds that 27% of adults identify as Democrats, while 26% identify as Republicans, narrower than the six-point advantage that Democrats have averaged in Post-ABC polls since last fall. The long-term stability of party identification suggests Republicans’ current parity may be temporary, although patterns will become clearer in the coming months.

The Post-ABC poll was conducted Nov. 7-10 among a national sample of 1,001 U.S. adults, with 75% reached on cellphones and 25% on landlines. Overall results have a margin of sampling error of plus or minus 3.5 percentage points; the error margin is four points among registered voters and is larger among other subgroups.