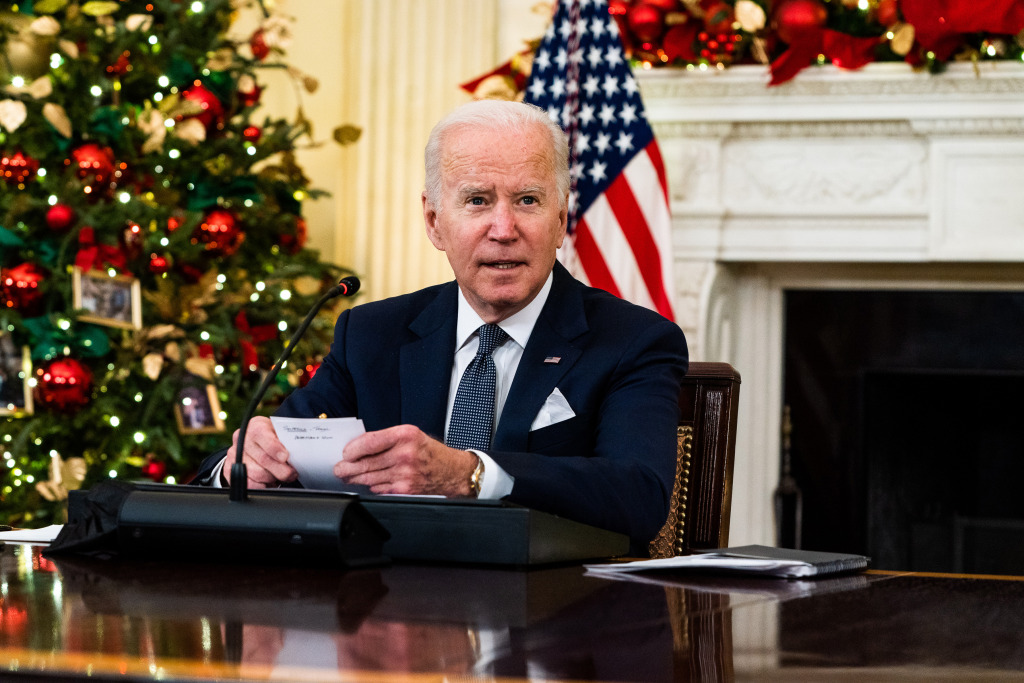 Four days before Christmas, as coronavirus cases spike and testing lines snake around city blocks, President Joe Biden on Tuesday will again attempt to persuade Americans to take protections to fend off the fast-spreading omicron variant.

But at a moment of great urgency—both for the nation’s health and the president’s standing—he has few new tools at his disposal, at least not politically palatable ones, and public health experts fear that exhausted Americans have tuned out their warnings.

Biden, who campaigned on a platform that some of the ravages of last year’s pandemic were preventable, is now faced with the challenge of explaining that omicron infections may be near-inevitable even in the vaccinated. The fast-moving variant accounted for nearly three-quarters of coronavirus cases in the past week, the Centers for Disease Control and Prevention said Monday. That astonishing advance has left some administration officials and experts frustrated with the government’s stay-the-course messaging, as well as its inability to ramp up the supply of rapid tests quickly enough to address demand.

In his speech Tuesday, Biden will outline plans to expand coronavirus testing sites across the country, distribute a half-billion free at-home tests and deploy more federal health resources to aid strained hospitals, as the omicron variant drives a fresh wave of infections.

The speech will not focus on “locking the country down,” White House press secretary Jen Psaki told reporters Monday, but the president will be “direct and clear with the American people about the benefits of being vaccinated, the steps we’re going to take to . . . increase testing, and the risks posed to unvaccinated individuals.”

“We know how to protect people from severe illness,” the White House said in a statement previewing the speech. “We have the tools needed to do it.”

The Biden administration will start delivering a half-billion free rapid tests to American homes next month, according to the statement. Health officials will set up a website where Americans can order the tests. New federal testing sites will also be established across the country, starting with one in New York City this week.

The Biden administration has emphasized increased testing as one of the pillars of its pandemic policies, but it has been criticized for failing to provide at-home tests at low cost. Americans are paying $25 for a pack of two tests, if they can find any at a local pharmacy.

Health officials say they fear that the emergence of the quickly spreading omicron variant could overwhelm health-care facilities nationwide. The variant accounted for 73% of new coronavirus cases in the United States between Dec. 12 and 18, according to modeled projections from the Centers for Disease Control and Prevention.

To relieve overrun hospitals, the federal government will immediately send emergency medical teams to Michigan, Indiana, Wisconsin, Arizona, New Hampshire and Vermont, the president is expected to say. Some of those states, such as Michigan, had been suffering from case surges even before the announcement of the first omicron case in the United States this month.

The administration will deploy an additional 1,000 military doctors, nurses, paramedics and other health-care personnel to strained medical centers in January and February as needed. The president will order the Federal Emergency Management Agency to work with states and territories to prepare more hospital beds ahead of expected surges.

Federal officials have earmarked N95 masks, gloves, gowns and ventilators from the national stockpile ready for shipment to states that may require rapid assistance in medical supplies. “The Administration has pre-positioned these supplies . . . so that we can send them to states that need them immediately,” the White House said.

But after close to a year of repeated messages to get vaccinated, administration officials have struggled to get through to holdouts, trying social media campaigns, vaccination lotteries and other efforts to raise awareness. Still, fewer than one-third of fully vaccinated people have received booster shots.

On Tuesday, Biden will renew his plea with Americans to get vaccinated and boosted, as well as outline efforts to make vaccination easier, including new pop-up clinics.

“While cases among vaccinated individuals will likely increase due to the more transmissible Omicron, evidence to date is that their cases will most likely be mild,” the White House said. “In contrast, unvaccinated individuals are at high risk of getting COVID-19, getting severely ill, and even dying.”

As the omicron wave bears down on America, public health experts say officials must focus on three things: persuading more Americans to get shots and wear masks, and making more tests available.

“We need to hear a clear strategy for … what’s going to be a really bumpy few months,” said Jason Schwartz, an associate professor of health policy at the Yale School of Public Health. “I’m skeptical about how much another presidential address, fact sheets and memorandums can really do.”

In Europe, many nations have reinstated restrictions in the last week or two to combat omicron, even as those measures upend Christmas and New Year’s plans The Netherlands began a so-called “snap lockdown” on Sunday afternoon, shuttering nonessential stores, bars and restaurants until mid-January. Ireland adopted an 8 p.m. curfew, France closed nightclubs and banned New Year’s fireworks, and Germany barred unvaccinated people from entering nonessential stores.

Celine Gounder, an epidemiologist who advised Biden’s transition team on the pandemic response, said it’s critical that the president reframes how Americans understand the pandemic. Although cases are skyrocketing, she said that early evidence suggests vaccinated Americans who contract the virus are generally not becoming seriously ill.

“Refocusing on hospitalizations and deaths is really important in terms of a strategic shift,” she said, adding that doing so would make clearer “all the things we need to be doing and where to emphasize, where to prioritize.”

Gounder, who remains in touch with administration officials, said there are other policy measures the president could announce, including additional steps to invoke the Defense Production Act to expand testing, urging schools and business to improve ventilation and air filtration systems and reimposing mask mandates. But ultimately, she said the push for more vaccinations is the most critical.

“That is the fast forward button on the pandemic,” she said. “That is how we rip off the Band-Aid and minimize the pain. I think that needs to be front and center.”

Inside the administration, health officials are collecting data on the severity of the omicron variant, compared to earlier lineages of the virus. But even if it turns out to be less severe, as officials hope, they warn hospitals are still likely to be overwhelmed because of the sheer number of cases, which will mean that a certain percentage of those will become severe.

Administration officials also say they are running out of tactics to encourage holdouts to take protective steps, having tried social media campaigns, vaccination lotteries and other efforts to raise awareness. While vaccinations and boosters appear to defang the most severe consequences of omicron, tens of millions of Americans continue to balk and getting vaccinated and fewer than one-third of fully vaccinated people have received booster shots.

Testing, meanwhile, can help identify and contain outbreaks, but rapid tests are in short supply and long lines are forming at test centers around the country. And while masks have been shown to reduce viral transmission, and the CDC has urged more than 90 percent of counties to require masks indoors, only a handful of states and cities, such as California, New York and Washington D.C., have so far reinstated mandates.

“The government can only solve so much,” said a senior health official who spoke on the condition of anonymity to discuss the government’s response. “If people don’t agree on the same set of facts—it’s hard to get people to do the things that we know will work.”

Public health experts counter that the White House could do more to inform the public. Yale’s Schwartz said he’s frustrated that administration officials have sidestepped questions at news conferences, such as whether the definition of “fully vaccinated” should be updated to reflect that many Americans have yet to obtain recommended boosters.

“It’s fair, I think, to ask our health officials to help explain why they land at a certain point . . . and what they’re keeping in mind as they think about changing it,” Schwartz said. “And that gets lost with this ritual refrain about ‘following the science, and it’s evolving.’ What frustrates me is I hear that invoked more and more frequently.”

White House officials have spent three weeks intensely sifting through data about omicron, seeking to understand the new variant without alarming Americans until more was known.

In a series of meetings in late November and early December, senior health officials were briefed on findings from South Africa that showed dramatic declines in protection from a two-dose regimen of Pfizer’s coronavirus vaccine, about two weeks before similar data was published last week, said two people with knowledge of the briefings.

White House officials cautioned the data drew on a limited study and said it would have been premature to share it before more was known. The findings align with a study released last week by Discovery Health, South Africa’s largest health insurer, which also concluded that omicron appears to cause less severe illness than prior virus variants.

Omicron poses only the latest messaging challenge in a series of such difficulties related to an evolving virus and science.

As a candidate, Biden blamed former president Donald Trump for mismanaging a pandemic that he called preventable. “If the president had done his job, had done his job from the beginning, all the people would still be alive,” Biden said at a town hall in September 2020.

Experts said the White House has also struggled to communicate why cases have continued to rise as new variants emerge. In a Los Angeles Times interview last week, Vice President Kamala Harris said “we didn’t see delta coming . . . we didn’t see omicron coming,” a statement the White House walked back amid criticism from public health experts that they had consistently warned about mutated forms of the virus.

Bruce Haynes, a crisis communications expert at Sard Verbinnen & Co., said that Biden’s team had repeated some of their predecessors’ messaging mistakes, such as failing to share “simple, easy-to-understand messages that don’t challenge the broader public.”

For instance, Biden officials in May advised that masks were no longer necessary in many cases, with the president calling it a “great day” in a Rose Garden news conference—only to reinstate mask guidelines less than three months later. This fall, the White House and some of its top scientific officials publicly split over the need for widespread booster shots, with senior Food and Drug Administration officials and CDC advisers bristling at Biden’s eagerness to roll out a national booster campaign. The result was a muddled message that scientific experts blamed for hindering the takeup of boosters, which have been shown to shore up waning immunity and provide key protection against omicron.