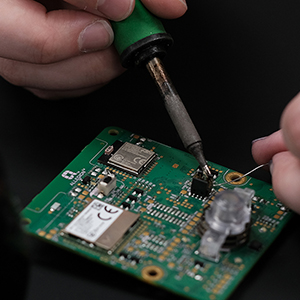 NEW ALBANY, Ohio — President Joe Biden on Friday celebrated the start of construction of a $20 billion project that aims to reassert the United States as a major technology manufacturer after decades of offshoring, with the building of two giant semiconductor factories that could deliver thousands of jobs in coming years.

The Intel manufacturing facility taking shape on a verdant plot of land outside Columbus, Ohio, is one of the most expensive and consequential investments in the United States in recent years — one offering enormous possible benefits for the economy, but also facing considerable challenges to reach fruition.

Billions of dollars of federal subsidies, approved in newly signed law, convinced California-headquartered Intel to proceed with the project, which aims to dramatically boost domestic manufacturing of the tiny components that power all modern electronics, from laptops to fighter jets.

But ramping up the vast manufacturing zone will take major effort, including consistent, years-long investment in the face of potential recessions and fickle Wall Street investors, and the training of thousands of engineers and technical workers amid a labor shortage.

In a speech, Biden said the project — and a flurry of other big semiconductor investment announcements — are an endorsement of his push to use $52 billion of taxpayer money to incentivize the reshoring of manufacturing deemed vital to U.S. economic and national security. The approach has also won wide support from Republicans, who want to strengthen U.S. competitiveness versus China, which is pouring state funding into tech manufacturing.

“Federal investment attracts private investment. It creates jobs. It creates industries. It demonstrates that we’re all in this together,” Biden told a crowd of hundreds who gathered to watch the groundbreaking ceremony, including local officials, Ohio’s governor and senators and engineering professors from across the Midwest.

“This is about our economic security. It’s about our national security. It’s about good paying union jobs you can raise a family on … jobs that show that the industrial Midwest is back,” Biden added during a ceremony featuring a gospel choir, Ohio State University’s marching band (“The Best Damn Band in the Land,” more than one speaker noted) and a panorama of dump trucks and diggers.

Intel Chief Executive Pat Gelsinger and other speakers emphasized the promise of bringing to the Midwest a lucrative high-tech industry previously located mostly on the West Coast.

With the investment, “we declared the end of the Rust Belt and the beginning of the Silicon Heartland,” Gelsinger told the crowd.

The federal subsidies, part of the Chips Act signed into law last month, are sparking a wave of chip investment. Micron is holding its own groundbreaking ceremony on Monday for a $15 billion chip factory near its headquarters in Boise, Idaho. Chip maker Wolfspeed on Friday announced plans to build a new manufacturing facility in Chatham County, North Carolina.

Taiwan’s TSMC, the world’s largest chip maker, has said it will seek subsidies for a $12 billion factory that it has begun building in Phoenix and is aiming to finish late next year.

And a partnership between SkyWater Technology and Purdue University will apply for a federal subsidy to build a new $1.8 billion factory and research facility next to the university in West Lafayette, Ind.

The United States today depends heavily on Asia and particularly Taiwan for its chips manufacturing, a reliance that has worried U.S. officials as the self-governing island’s tensions with China rise.

Concerns about that dependence have soared over the past two years amid global shortages of chips that hobbled all kinds of manufacturers, including automakers, which were forced to halt their production for weeks at a time.

Asian governments have long subsidized chip manufacturing, helping them corner the lion’s share of production in recent decades, to the detriment of the United States and other Western nations that took a more laissez-faire approach. Chip factories are among the most expensive manufacturing facilities to build, costing $10 billion or more, making many investors reluctant to build them without government assistance.

About 37 percent of the world’s semiconductors were manufactured in the United States in 1990 versus about 12 percent in 2020, according to the Semiconductor Industry Association.

Willy Shih, a Harvard Business School professor who specializes in technology and manufacturing, praised the subsidy program for spurring vital investment, but said that to compete with Asian chipmakers, domestic manufacturers and the U.S. government must be ready to “play a very long game” that could require even more federal spending down the road.

“The U.S., and the president, should not be deluded into thinking that the $52 billion from the CHIPS and Science Act is anything more than a down payment,” Shih said.

Congressional enthusiasm for additional subsidies is far from assured. Some Republicans remain skeptical of using taxpayer funds to incentivize industry. Some progressives are also wary, including Sen. Bernie Sanders (I-Vt.), who ultimately voted for the Chips Act but called it corporate welfare for a highly profitable industry.

Intel’s two new factories, scheduled for completion in 2025, will create 3,000 Intel jobs and about 7,000 construction jobs, the company said, adding that those numbers will grow substantially if Intel opts to continue building out the site, which can accommodate eight chip factories in all.

Dozens of suppliers creating thousands of additional jobs are expected to cluster around the factories, creating spillover economic benefits.

With striking similarity, speaker after speaker at the event expressed hope that the investment will allow Ohio’s young people to remain in state instead leaving for the coasts to pursue their careers.

“We’re going to keep more of our kids and grandkids right here in our state because of opportunities like this,” J.P. Nauseef, chief executive of the economic development group JobsOhio told the crowd.

Local residents attending the ceremony said they are cautiously optimistic about the project and the jobs it will bring. But some worried that property values will spike beyond the reach of current residents. And Todd Huston, a local IT professional with a degree in biology, said he has concerns about the environmental impact.

“My daughter lives a half mile away from the plant – they’re building a home – and my granddaughter is one year old. So I had concerns about their health,” Huston told The Post on the sidelines of the ceremony. “So I started looking into the chip manufacturing process, the facilities, and was concerned because of the amount of chemicals, the acids, the solvents that are used in the process.” He also worried about the air emissions from the factories.

Huston said an Intel official contacted him after seeing his social media posts on the topic, and has been answering his questions about the environmental impact. “I have not seen or experienced any kind of redirection or stonewalling in regards to questions I present to them, so that’s encouraging,” he said, adding that he has been partly reassured to learn about the Environmental Protection Agency regulations that the project must follow.

Intel has said its manufacturing plants will meet the highest environmental standards.

Nearby states are hoping to benefit from the cluster of suppliers that industry experts say is bound to develop around the Ohio site. Giant chip factories need chemicals, blank silicon wafers to etch, and equipment and service providers.

“Microelectronics occurs in clusters. We believe Indiana and Ohio are a cluster,” Indiana’s Secretary of Commerce Brad Chambers said in an interview this week. “That Silicon Heartland concept I think is real.”

Indiana has set up a task force to try to attract some of these investments, hoping to use Purdue University and the many engineers it educates as a draw.