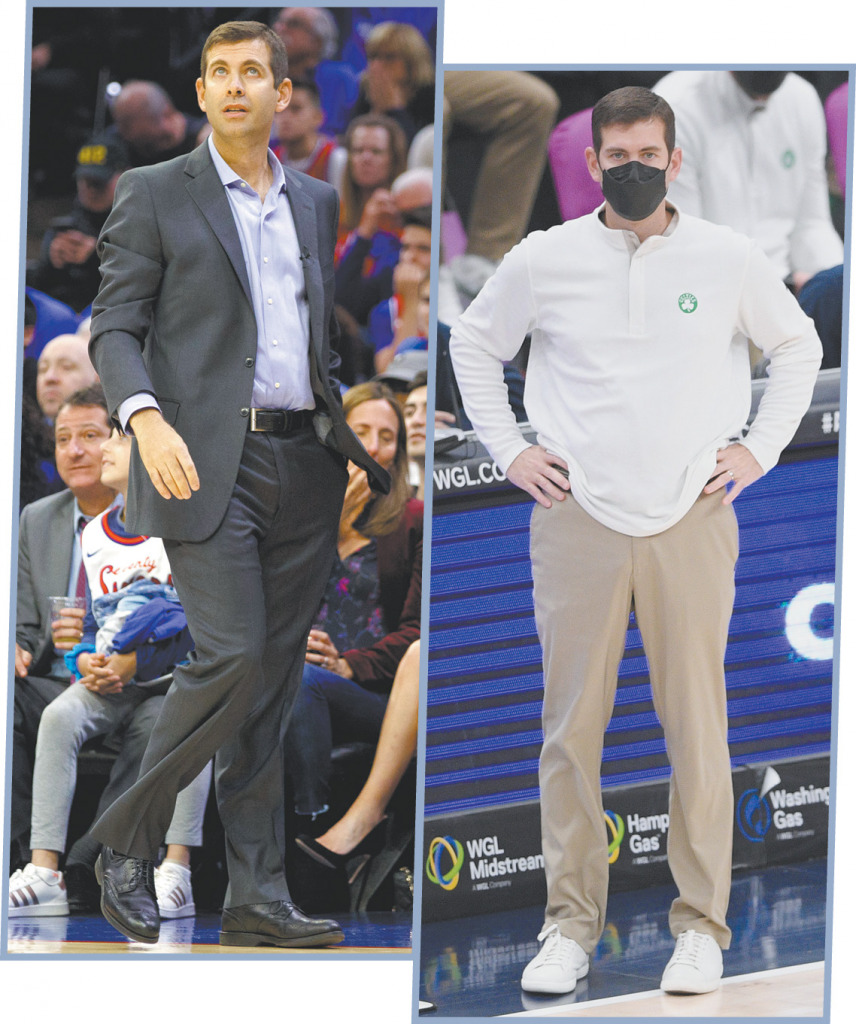 Boston Celtics Coach Brad Stevens in 2019, and during the pandemic. (AP photos)

Danny Ainge, who helped bring two NBA titles to Boston as a player and another as the team’s basketball boss, stepped down from the Celtics front office just hours after they were eliminated from the postseason, and coach Brad Stevens is giving up his job on the bench to replace him.

Stevens, a Zionsville native who coached Butler University to NCAA championship games in 2010 and 2011, will lead the search for his successor, the Celtics said in a news conference Wednesday. He leaves as the fourth-winningest coach in franchise history, but one who failed to hang a championship banner from the rafters.

Stevens, who left Butler in 2013 after leading the Bulldogs to back-to-back trips to the NCAA championship game, ends his only NBA coaching job with a 354-282 record that included three trips to the conference finals in the previous four years.

This year’s team flirted with a top-four seed in the East before losing 10 of its last 15 games and falling into the play-in round. The moves came about 12 hours after the Celtics lost to the Brooklyn Nets in Game 5 of their first-round playoff series.

Ainge, 62, won championships with the Celtics as a player in 1984 and ’86 and took over as the president of basketball operations in 2003. He was voted the league’s top executive in 2008, when Boston won its 17th championship—an NBA record that has since been matched by the Los Angeles Lakers.

“Danny has meant so much to Celtics pride, the reinvigoration of the franchise,” team owner Steve Pagliuca said. “The great news is we have continuity, with Brad, who has been side-by-side (with him) the last eight years.”

Ainge said that after having a heart attack two years ago, “I started thinking about what I was doing with my life.”

“You’re surrounded by your six children in the hospital and they say, ‘Hey, you need to stop doing this,’” he said. “I don’t know what my future holds. I don’t have any plans. Right now my goal is to get Brad up to speed on the draft … put the Celtics in the best place they can be. I’ll make the decision on the future somewhere in the future.”

Celtics staff were informed Wednesday morning of the moves, which were first reported by ESPN and The Athletic.

Stevens’ 354 wins trails only Red Auerbach, Heinsohn and Rivers on the team’s all-time list. He said the search for his replacement will be “wide-ranging and comprehensive.”

“I’m excited for Brad. I feel like he was born for this: Indiana kid, basketball junkie, smart, lives the game, has many resources and has a great staff,” Ainge said. “This is a great day for the Celtics. I think actually this is a big step forward.”

After reaching the conference finals last year, losing to Miami in the NBA bubble, the Celtics struggled with injuries and COVID-19 this season to fall to seventh in the East. They beat Washington in the play-in game but could only manage one win against the Nets and former Celtic Kyrie Irving.

Although he made one All-Star team and was the starting guard on two Celtics champions, Ainge’s greatest accomplishment in Boston was constructing a new Big Three of Paul Pierce, Kevin Garnett and Ray Allen that won it all in 2008 and ended the longest title drought in franchise history.

Since then, he has had success in the draft, especially with emerging stars Jayson Tatum and Jaylen Brown. But even with the addition of established stars like Al Horford, Gordon Hayward, Irving and Kemba Walker, Ainge has not been able to build another championship team.

And for what had long been the NBA’s most-decorated franchise, that’s the only standard that matters.

“We are going to win banner 18 or die trying,” Grousbeck said. “That’s the way Brad feels about it. That’s the way I feel about it. and all of us … believe Brad is the person to lead us on the basketball side as we go after that lofty goal.”