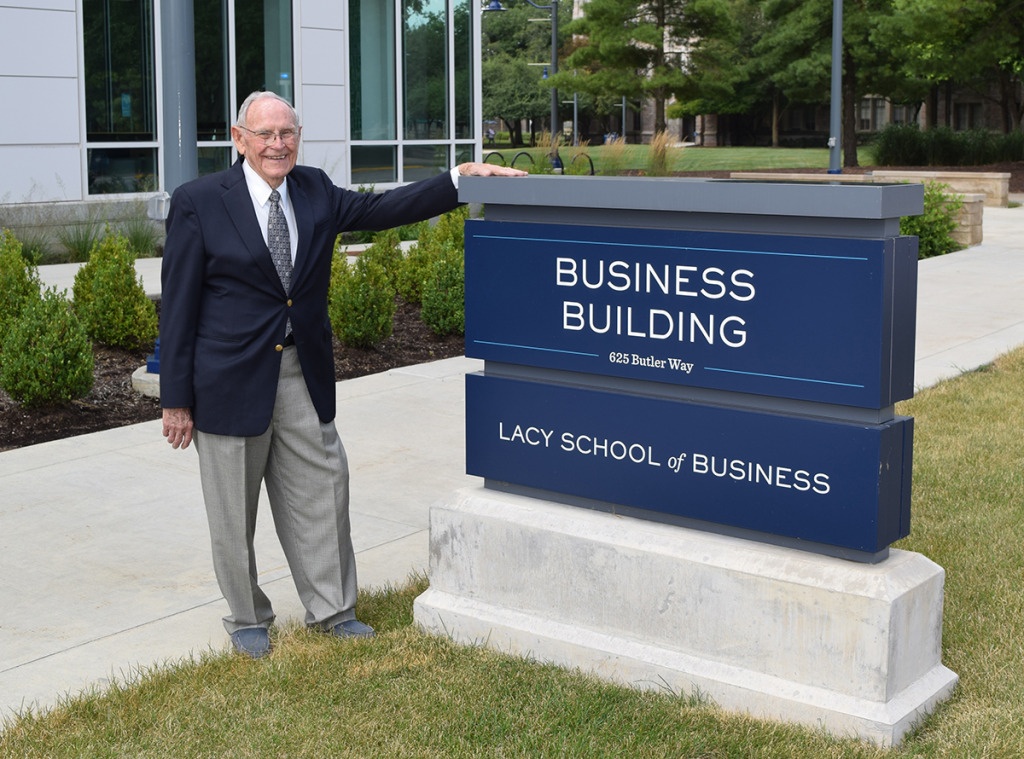 The building that houses the Andre B. Lacy School of Business will be named for Bill Dugan and his late wife, Joanne. (Photo courtesy of Butler University)

Butler University is naming the new building on its campus that houses its business school after an entrepreneurial alumnus who has pledged to donate $7 million to the university.

The 110,000-square-foot building, which recently was constructed for the Andre B. Lacy School of Business and related programs, will carry the name Bill and Joanne Dugan Hall.

Bill Dugan is owner and president of Sign Crafters Inc., an Evansville-based company that designs, manufactures and installs business signs. Originally from Huntingburg, Dugan graduated from Butler in 1951.

He met his wife, Joanne, when the two were students at Butler in the late 1940s. They were married for 56 years prior to Joanne’s death in 2014.

“I felt at home at Butler throughout my entire undergraduate career and I appreciate all that Butler game to me,” Dugan said in a media release. “Giving back is the Butler Way, and this seemed like the right thing to do.”

Dugan’s donation is a multi-year gift commitment dedicated to supporting the facility, according to the university.

Butler broke ground on the building in 2017, following a $25 million gift from Andre and Julia Lacy that entailed naming the business school. A portion of the Lacy gift was designated to support construction of the new facility, which vastly expanded the amount of space on campus devoted to the business school.

Completed in 2019, the building itself remained unnamed. It also houses the Butler Beyond Transformation Lab and the Office of Career and Professional Success.

As the building’s largest benefactor, Dugan will have a designated office in the facility and has been named a senior adviser to the Andre B. Lacy School of Business.

“I am deeply grateful to Bill Dugan for his extraordinary investment in Butler University and our students,” President James Danko said in a media release. “We are extremely proud to have the Dugan family name permanently recognized on our campus through this facility.”

As a student, Dugan worked concessions at Hinkle Fieldhouse to help pay for his Butler education. He earned his undergraduate degree in accounting before becoming a successful entrepreneur.