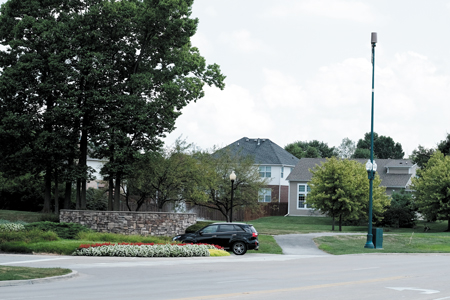 The resolution follows several weeks of discussion among Carmel officials and residents, who have expressed concerns about the health and safety implications of the technology.

The resolution passed the council 4-3 with council president Jeff Worrell, Sue Finkam and Kevin Rider voting against it.

Over the past two city council meetings, several residents have addressed the council, asking it to take action to halt 5G deployment. Many said they’re worried about the long-term health impacts it will have on their children. The city’s cable and telecommunications commission also urged city councilors to take some sort of action.

The technology, which is already being rolled out in cities across the country, relies on small cells being installed closely together and closer to users than ever before. Verizon and AT&T have been rolling out 5G service to portions of the Indianapolis area this year.

Research on the health effects of the equipment has been somewhat inconsistent. The World Health Organization and International Agency for Research on Cancer have classified all radio frequencies, including those used in cellular networks, as possibly carcinogenic to humans. Additionally, a decade-long study by the National Toxicology Program found that exposure to radio frequency radiation used by 2G and 3G technologies is associated with “clear evidence” of cancerous tumors in male rats.

“Just after hearing some of the concerns, (we) wanted to make some sort of statement that those concerns need to be looked into,” he said.

The state and FCC have passed laws and regulations that limit local governments’ abilities to hamper the deployment of 5G in an effort to ensure the technology is accessible.

Carmel’s resolution urges the state Legislature, Congress and the FCC to “take a second look” at the evidence regarding health impacts and limit deployment in the meantime, Green said.

“While the council supports the innovation and use of new technology that will provide a better quality of life to Indiana residents and guests, it is very concerned about rushing to implement 5G technology before its effects on humans are fully understood, and urges prudent care be taken to ensure that no one is harmed therefrom,” it reads.

The resolution as originally drafted called for the state Legislature to “immediately suspend the deployment and use of 5G technology until scientific evidence conclusively establishes that this technology poses no health risks to humans.”

That language was softened to “limit” before being presented to the council.

Still, Worrell recommended the council create a task force to study the issue further before passing the resolution—a motion that was ultimately rejected.

Finkam said she doesn’t agree with the resolution and called it overly broad.

“We are asking to limit 5G technology until—this is a very broad statement—’scientific evidence conclusively establishes that this technology poses no health risk to humans,’” she said.