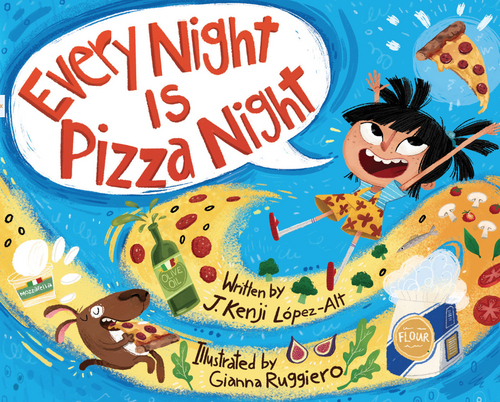 Pipo is a young girl in a new book for kids who insists that pizza is the best food on Earth.

Prompted by her mom to prove it, Pipo goes across her neighborhood testing alternatives: tagine, red beans and rice, bibimbap and dumplings.

Her new conclusion: Pizza is the best. But there are also a lot of other bests, too.

That’s the charming premise of “Every Night Is Pizza Night” (Norton Young Readers), the debut children’s book by J. Kenji López-Alt, a guru of food science and a new father.

“I knew I wanted to write a book about food, and particularly a book about food from around the world and multiculturalism,” he says. “It’s about a picky eater who figured out how to not be picky.”

The book pulls together many strands of López-Alt, who is the author of “The Food Lab: Better Homecooking Through Science,” a textbook-like cookbook with roots in scientific reason. He’s also an advisor for the site Serious Eats, a partner in a restaurant in San Mateo, California, and the father of daughter Alicia, 3 1/2.

Though the heroine in the book is a picky eater, López-Alt and his wife, Adriana Lopez, have been blessed with a daughter who eats lots of things. Actually, they’ve helped condition her that way.

The day she was brought home from the hospital, Alicia was propped up on the kitchen counter as dad cooked, a sign she’d spend lots of time in kitchens. Her parents frequently let her smell new ingredients, let her eat what she wants, and never tell her anything is “yucky” or not appropriate for a child.

“My goal was to expose it as much as possible from the time she was born,” he says. “A kid doesn’t grow up with any sort of predefined notions of what’s delicious and what’s not.”

It’s a bit different from López-Alt’s own strict upbringing. His mom’s rule was no one could leave the dinner table unless everything on their plate was consumed. At snacks, she carefully counted out potato chips.

“I ended up taking the opposite approach to it, which so far has been working,” he says. “My wife and I have been extremely lucky in that she is a very adventurous eater.”

So far, their daughter likes pizza, but it’s not her favorite food. She adores tofu, broccoli and fish eyeballs. Yes, López-Alt buys a whole fish and his daughter gets dibs on the eyes. She doesn’t know that’s unusual.

López-Alt encourages his daughter to help in the kitchen, supplying a wooden or nylon knife and a mortar and pestle. He encourages children to explore, and his restaurant makes smaller portions of his adult menu, balking at chicken fingers and burgers.

“Kids are a lot smarter and more capable than adults sometimes give them credit for, and it’s easy if you treat them like they’re smart. They frequently step up.”

López-Alt found that writing a children’s book is much harder than it looks. “I use a lot of words. My articles tend to be long and my books tend to be long,” he says. His first draft for “Every Night Is Pizza Night” came in at a whopping 10,000 words.

The book is brightened by whimsical illustrations by Gianna Ruggiero, whom López-Alt found on Twitter. Ruggiero used photos López-Alt supplied of his family to guide her portraits of Pipo and her parents, as well as adding her own expressive, almost trippy take on the girl tasting new foods.

“The book takes place in these very real-world scenarios, so tasting should feel out of this world or magical or surprising,” she says.

Pipo’s obsession with proving scientifically that pizza is the very best food is a subtle in-joke for fans of López-Alt, whose writing often frames his recipes as the best way to do a dish.

He means it tongue-in-cheek as the “best” way for him, not the only way, but some readers have taken the wrong message and put other people’s food down. So Pipo’s insistence on finding the best meal is López-Alt’s way of tweaking himself.

“That whole theme in the book was definitely in response to some of my adult readers who take it the wrong way,” he says. “You’re completely misunderstanding my usage of the word ‘best’ there.”

López-Alt is working on another book, this time for home cooks. It’s focused on the wok, the most-used piece of equipment in his kitchen.

It’s due out next year, that is if he can find the time to cook and write. “Having a restaurant and having a daughter does not mean a lot of free time,” he says.

Mark Kennedy is an entertainment writer for the Associated Press.