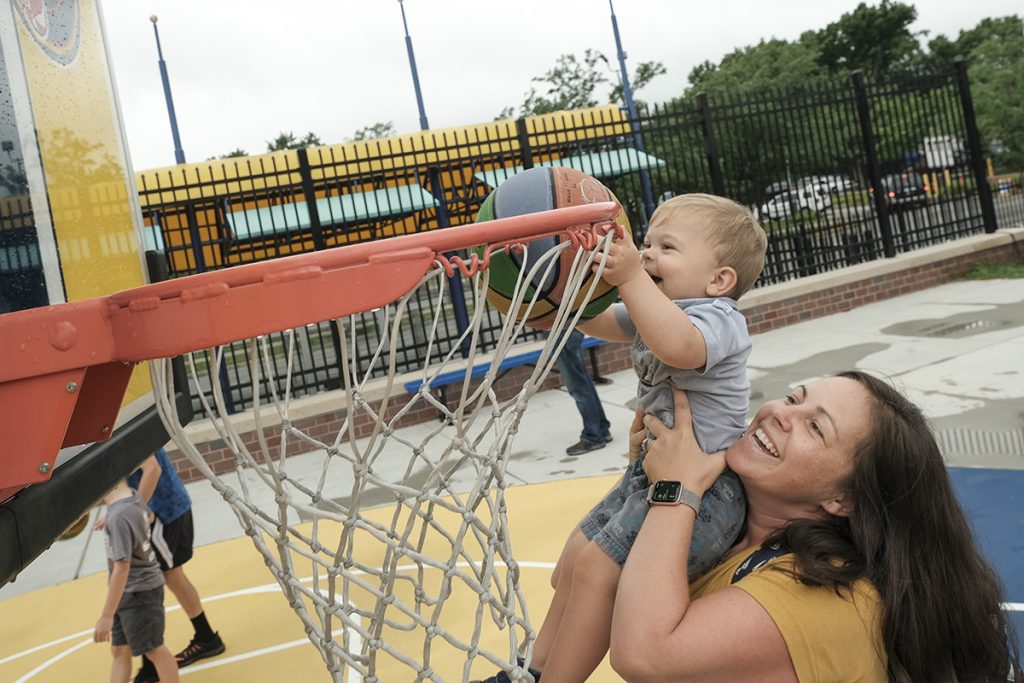 The Children’s Museum of Indianapolis plans to spend $16 million on new programming, exhibits and upgrades over the next three years, as museum officials look to continue growing the facility’s popularity among both Hoosier and out-of-state families.

Three temporary exhibits will open this year, and a handful of existing spaces will receive substantial upgrades—including the popular Dinosphere space. In fact, Dinosphere renovations will last several years and will eventually total $27.5 million.

All the upgrades are part of the facility’s strategy to keep building its audience after a record 2019, during which the museum drew 1.3 million visitors.

But the museum is also looking at longer-term projects, including potential expansion on land it owns north of the five-story building at 3000 N. Meridian St. The board of trustees has also begun succession planning as longtime President and CEO Jeffrey Patchen eyes retirement.

The 65-year-old Patchen has been with the museum since 2000, carrying it through many evolutions, including the addition of a welcome center in 2009 and the Riley Children’s Health Sports Legends Experience in 2018.

The way Patchen sees it, the reasons for the museum’s lasting success are simple.

“I think a lot of it is because we appeal to the grandparents as well as the grandchildren,” he said. And “we’re always changing.”

The museum on Feb. 8 will debut the first of three 2020 temporary exhibits: “The Pigeon and Pals! A Mo Willems Art and Play Exhibit.” The other two, “Wild Weather” and “Barbie,” will open March 14 and May 30, respectively.

Patchen said each will offer a wildly different experience for guests—art, science and popular culture—highlighting the museum’s continued efforts to “have something for everyone.”

The museum is relying on multiple mechanisms to pay for the exhibits and upgrades. In addition to fundraising and grants, the not-for-profit has a hefty endowment, which had a balance of $326 million at the end of 2019.

The endowment funds about 45% of the museum’s annual operating budget, while the rest comes from memberships and admissions (35%), donations (10%) and programming fees (10%).

Patchen said the world’s largest children’s museum—which has more than 130,000 objects on display—has a fund-before-it-builds policy that “has served the museum really well over the last 20 years.” As a result, he said, the museum has increased earned and contributed revenue through what he described as “modest” admissions price increases.

The museum operates on a dynamic-pricing model, which determines the ticket price based on the day a visitor comes to the museum. This year, the admission price went up about $1, fluctuating from $15 to $22 for children and $22 to $28 for adults, according to the museum website.

The Children’s Museum offers $2 tickets and a 10% food-court discount for low-income families, including those enrolled in the SNAP, Hoosier Works, Hoosier Healthwise insurance or Temporary Assistance for Needy Families programs.

Memberships increased $5 this year, a boost of less than 2%.

“It’s really allowed us to remain affordable and to provide financial stability for the museum’s operations in its future,” he said. “We’re certainly not as dependent as we were 20 years ago on the endowment.”

Patchen said the museum should be able to continue increasing its visitor turnout as long as it continues to bring in new and exciting exhibits.

The biggest addition now underway is the Dinosphere expansion, including Mission Jurassic, which will bring two massive dinosaur skeletons to the museum by about 2022. The expansion’s first phase will debut yet this year, Patchen said.

The exhibit will start off with about 500 fossils uncovered by the museum’s research team at the Jurassic Mile dig site in Wyoming. The museum has the square mile under lease for another 17 years, during which it plans to procure thousands of fossils.

The dig team is currently trying to recover two long-neck sauropod dinosaurs, estimated to be about 85 to 100 feet in length, as part of the expedition. Patchen said the museum has expanded its paleo lab as it prepares to begin receiving the fossils.

“I know we think the T-Rex is big, but it’s small” compared to these dinosaurs, he said.

The Children’s Museum last year secured a $9 million grant for the project from the Indianapolis-based Lilly Endowment.

Over the next two years, the museum also plans to expand its Power of Children exhibit, with the addition of Malala’s World. Pakistani activist Malala Yousafzai was shot at the age of 15 for advocating for girls’ right to education.

Mike Sherman, chairman of the museum’s board, said the museum is focused on incorporating education into all its exhibits, but noted that lessons can take many shapes.

“While we focus much of our attention on teaching children and their families, we recognize and celebrate those extraordinary stories where children are the teachers and catalysts for change,” he said.

About 60% of museum visits in 2019 came from the organization’s 36,000 members and their families and guests. Patchen said the Mission Jurassic project and other changes should further bolster membership count.

The museum’s visiting base is evenly split between Indiana families and those from out of state, Patchen has told IBJ.

He said in September that about 32% of visitors come from the greater Indianapolis area and about 18% from the rest of Indiana. The other 50% comes from outside the state, including other countries.

The museum is one of Marion County’s hottest spots for tourists, according to visitor counts, with the Indianapolis Zoo and Indianapolis Motor Speedway close behind. Chris Gahl, vice president of Visit Indy, said the museum is an attrction that “makes people from all over want to come to Indianapolis.”

“Based on the caliber and the diversity of its exhibits—and the sheer size of the thing—the Children’s Museum lends itself to a family coming and spending multiple days in our city,” Gahl said.

He said many conventions that visit Indianapolis also have groups that take trips to The Children’s Museum, allowing the museum to serve as a showcase for what the city has to offer.

Gahl said the Sports Legends Experience helps visitors of all ages connect with Indiana’s sports culture in a unique way.

“The ethos of Indianapolis is sports,” he said. “So, to have an interactive, very thoughtfully curated outdoor exhibit like this plays to what we’re most known for—sports.”

He said visitors view the experience as a “perfect match” of celebrating the city’s sports history, exercising and recognizing “a diverse roster of sports legends who are tied to our city and state.”

Patchen told IBJ the museum has no current plans to expand the $14 million Sports Legends Experience, but said it might consider doing so “down the road.”

The museum is also weighing additional expansion on its sprawling, 30-acre campus. Last summer, it announced plans to tear down the Drake Apartments and Salvation Army buildings north of its campus to make way for programming opportunities.

Brian Statz, the museum’s vice president of operations, said officials are “keeping an open mind” about both properties, but any efforts to move ahead with demolition is on hold until a request for information process for the Drake is completed in conjunction with the city.

He said the museum does not want the structure to be torn down, but opted to do so last year after its own request for ideas from developers fell flat.

The new RFI is looking for a developer to find an adaptive reuse for the building and is backed by city incentives. The action followed negotiations between the parties that began after an IBJ story in July about the museum’s plans for demolishing the Drake.

The museum has owned the site since 2014, but the apartments were vacated in 2016 as the building’s condition continued to deteriorate.

Emily Mack, director of the Indianapolis Department of Metropolitan Development, said the city has received some level of interest in the Drake from about 20 parties, though it’s likely not all will respond to the RFI. Responses are due later this month.

“We feel good about where things are right now,” she said. “But we will have a better idea, certainly, when we see the responses we receive in the next few weeks.”

The museum’s original plan for the demolition was to turn the lots into parking, with the option of using the space for future opportunities.

The museum is still looking at how to add parking spaces—often, visitors have to rely on street parking in the neighborhoods near the museum because the facility’s lots and garage are full.

“Down the road, we’ll be looking at how [we can] continue to provide easy parking access,” Patchen said. But “right now, we do not have any plans for physical expansion beyond what we already have.”

Patchen said the museum will also look to incorporate new technology—but not too much—throughout the facility.

He said the museum will likely continue to grow augmented and virtual reality offerings in some areas, but added he doesn’t expect a time when screens will fully replace real artifacts and objects.

Patchen said having “a real object for people to touch and interact with, from a learning perspective, is much more impactful than sitting at a screen.”

Patchen said he expects to step down in the next few years. “I’ll miss the museum very, very much,” he said. “But I have no doubt that this board and this executive team and staff will be part of a selection of the next CEO, who I’m sure will take it to even greater heights.”

Sherman, the board’s president, declined to address transition timing, saying matters are still fluid. He also didn’t indicate whether the board would conduct an internal or external search—or both—for a replacement.

But he noted the board will likely pick someone in the same vein as Patchen—a business-minded leader who will help the museum build on past success and continue growth and financial stability.

“We’re fortunate to have a CEO who continues to bring an amazing level of energy to the role,” Sherman said. “As important, he has developed an outstanding management team of strong leaders who work incredibly well together.”•