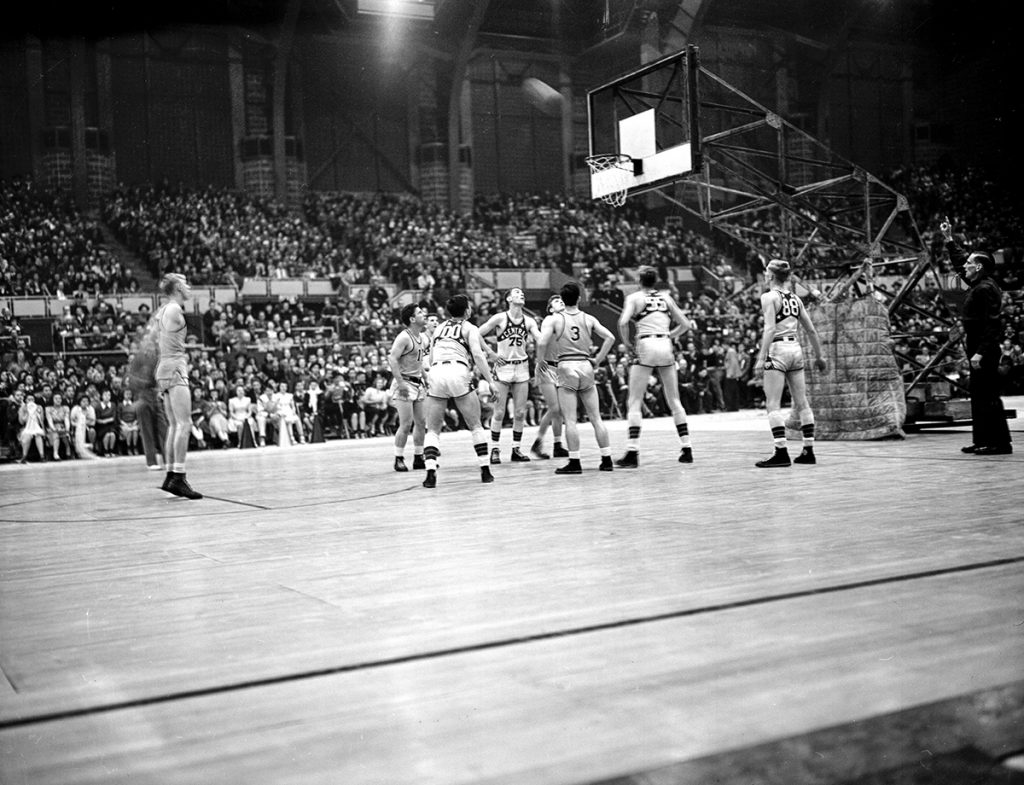 It’s as hidden from the general public as a big and busy place can possibly be, plopped down amid the fairgrounds and deep in the shadows of the city’s other grand sports venues. Three miles east of the ancient Hinkle Fieldhouse and 8.3 miles north of the soon-to-be-even-more-modern Bankers Life Fieldhouse, it’s as overlooked as it is underappreciated.

But that doesn’t mean we shouldn’t love the Indiana Farmers Coliseum just the way it is.

Consider this an ode to the art deco building on East 38th Street that doesn’t quite measure up to its siblings in reputation but stands tall on its unique style and substance. Think of it as an introverted middle child that doesn’t flaunt its virtues and must be studied to be understood but can be counted on in times of need.

The status of the Coliseum—whether it’s going by State Fairgrounds Coliseum, Pepsi Coliseum or Indiana Farmers Coliseum—suffers because it doesn’t go to extremes. It’s old, but not as old as Hinkle. It’s refurbished, but will never equal the downtown fieldhouse or, for that matter, the demolished Market Square Arena, for modern amenities. It’s big, but its seating capacity for basketball falls short of more than a dozen high school gyms in the state. It’s historic, but not as historic as …

Hold on. Let’s stop there.

History oozes from the Coliseum’s buff brick and limestone pores like water through a leaky roof, which it certainly has had over the years, sometimes during events. The stories it has contained will never be outdone by a fieldhouse of any vintage. It has been, simply, the most multi-functional facility in the city, a place that hosted presidents Franklin D. Roosevelt and John F. Kennedy; entertainment acts such as Elvis Presley, the Beatles and the Jackson Five; and just about every sporting event that can be played indoors.

The basketball Jaguars of IUPUI and the Indy Fuel hockey team call it home, so some might say it’s a JV facility compared to the fieldhouses in town. But that’s OK. The smaller-conference and minor-league games are important elements of the city’s sports scene as well and need adequate and unassuming shelter.

The tragic explosion that killed 73 people at a Holiday on Ice performance in 1963 cannot be ignored, but we’re here to salute the rugged, rumpled Everyman nature of the place that has welcomed the huddled masses of sporting events that had no other place to go. Or couldn’t afford the rent if they tried.

The Coliseum opened in 1939, on the same ground where the original one stood, but 50 feet wider and 25 feet longer. It owes its birth to FDR’s Public Works Administration, which donated $514,350 to be combined with money raised by a state bond issue for a $1.2 million structure that became an immediate landmark.

The first event, appropriately, was a cattle show at the state fair, followed quickly by a horse show. But an era began in October of that year when a new hockey team, the Capitals, began playing there. A franchise had been granted to Indianapolis in the International-American Hockey League in July, marking the city’s debut in a bona-fide and lasting professional sports league.

The Capitals won their home opener before a capacity audience of 9,193 fans, with many more turned away. Ticket prices ranged from 40 cents to $2. It was a classy affair as hockey games go. The Civic Theater sponsored it and the patrons sitting in the box seats—folding chairs, if you want to know the truth—dressed up as if attending a theater event.

And thus, a new sports venue was born in the city. One that today can boast of hosting the widest range of teams and events and oddities. The Coliseum has hosted five hockey teams—the Capitals, Chiefs, Racers, Ice and Fuel—national figure skating championships, nationally televised boxing matches, professional wrestling matches, auto racing and basketball.

Basketball, of course, has created the most memories.

The sport’s debut in the building was the Indiana-Kentucky all-star game in 1942. It had been played at Butler the two previous years and would be played there for many more, but the Coliseum took it in this once because Butler’s fieldhouse was being used as a naval munition depot during World War II.

It also hosted the state high school tournament in the war years, from 1943-1945, while the fieldhouse was still otherwise occupied. It welcomed The Harlem Globetrotters several times in the 1950s and ’60s, and NBA teams came as well. One year after the Indianapolis Olympians, a charter NBA member that played at Butler, folded, the Coliseum hosted a double-header. A clock malfunction stopped play during the first game, at which point New York Knicks center Connie Simmons bummed a dime from a fan and purchased a soda from a passing vendor.

It hosted four NBA playoff games in April 1955, including Games 3, 4 and 5 in the championship round. Fort Wayne’s Coliseum had been taken over by a national championship bowling tournament, so the Pistons moved their home games to Indianapolis. Fort Wayne won all three to take a 3-2 lead in the series but lost the final two games in Syracuse. So now you know: The Pacers’ trip to the NBA Finals in 2000 didn’t mark the first time Indianapolis has hosted such games.

The Cincinnati Royals began making annual visits to the Coliseum after they drafted Oscar Robertson in 1960 and played four games there in the 1965-1966 season. The final one against the Los Angeles Lakers stands as one of the best professional games ever played in the city. Robertson scored 39 points, but Jerry West finished with 31 and Elgin Baylor 27 to lead a Lakers victory that clinched their Western Division championship. It drew 6,310 fans, proving Indianapolis could be a viable market for a professional team again.

Two years later it was, when the American Basketball Association was formed. Butler, still stinging from its association with the scandal-ridden Olympians, wanted nothing to do with another professional basketball team, so the Pacers had no choice but to play in the Coliseum. It is impossible to do justice in this space to the franchise’s experience in the building over its first seven seasons. It would be impossible to capture it in print, really. You had to be there.

The venue smelled faintly of barn animals, an odor lingering from the state fair livestock shows that went one-on-one with the popping popcorn at the concession stands. A cold draft blew through the doors on winter nights. A cloud of cigarette smoke hung over the court, so thick that, by the end of the third quarter, players had to squint to see the scoreboard. The locker rooms were spartan. The restrooms were minimal. Frankly, it was pretty much a dump.

And it was wonderful.

“We loved it,” Pacers Hall of Famer George McGinnis says. “It was intimate and loud. And smoky.”

The top ticket price for a Pacers game in their inaugural season was $4, with the cheapest going for $1.50. The Coliseum’s listed capacity was 9,123, but fans could purchase the right to stand and watch a game from the end zone behind the seating area for a buck and drive attendance past 10,000, fire marshals be damned.

Even from there, fans saw things you don’t see today. A lot of things.

Fights were not uncommon, and players usually weren’t ejected if involved. A fan could throw a cup onto the court to protest a referee’s call, even if it was filled with a beverage, and probably get away with it. One portly front-row fan along the sideline opposite the team benches had a habit of sliding his glasses onto the court if he considered the referee’s vision faulty.

Referees were such targets for abuse, in fact, that, on a couple of occasions, a dummy made to look like one was hung in effigy from the back of the goal support.

Who would do such a thing? A couple of the wives of Pacers employees, if you want to know the truth.

And then there was the lineup of six or seven women who sat in the front row of one of the end zones and rode the referees mercilessly. “Murderers Row,” they were called. What kind of ladies would do such a thing? Pacers Coach Slick Leonard’s wife, Nancy, for one.

But here’s the catch: After games, stat crew members, team employees, a few players, assorted wives and, yes, the referees would gather in The Pub on the Coliseum’s lower level to share laughs.

Like McGinnis said, the games at the Coliseum were intimate. For everyone.

Billy Keller, who played on all three of the Pacers’ championship teams, remembers parking in the players’ lot and walking into the locker room through a back door. He could exit out of the room’s front door after the game if he wanted—and he usually did—and be greeted by fans standing in the hallway. The team’s security force consisted of one police officer standing by the locker-room door.

“Back then, it was more fun, family and community,” Keller says. “That’s what makes it so memorable. People didn’t have to spend a lot of money to come watch you play, and people could feel a part of it because they were so close.”

The Coliseum has been modernized by a $53 million dollar renovation, a necessary step forward that was completed in 2014. It looks as good as an 81-year-old can look, still classic in its lines and finishing touches yet much cleaner and more comfortable than back in the day. But for the people who knew it when, it’s a symbol of a simpler, rowdier and more affordable time when the games were less sophisticated but more fun.

If you were there to see it, hear it and smell it, the memories will never fade. •

Montieth is a longtime newspaper reporter and freelance writer. He is the author of three books: “Passion Play: Coach Gene Keady and the Purdue Boilermakers,” “Reborn: The Pacers and the Return of Pro Basketball to Indianapolis,” and “Extra Innings: My Life in Baseball” with former Indianapolis Indians President Max Schumacher.

One thought on “MARK MONTIETH: City’s underappreciated ‘middle child’ of sports venues is loaded with history”