Dozens of clients of the Carmel-based investment firm Indie Asset Partners are concerned they’re at risk of losing a big chunk of the tens of millions of dollars that went into a New York hedge fund as part of what was supposed to be a risk-reducing diversification strategy.

Investors are puzzled and upset that the hedge fund, Prophecy Asset Management, which was supposed to spread out funds to dozens of separate money managers, instead concentrated the money with a single Florida manager whose performance tanked when the pandemic threw markets into turmoil early last year.

That manager, Brian R. Kahn, served as a so-called subadviser for two Prophecy investment funds: Prophecy Trading Advisors, which started 2020 at $363 million, and Prophecy Special Opportunities Fund, which started that year at $50 million, according to records reviewed by IBJ.

By the time Trading Advisors crashed, 98% of its assets were flowing through Kahn, according to a lawsuit Indie Asset Partners and another investment firm filed in Delaware in June seeking access to Prophecy’s books and records. At one point, Trading Advisers had been using about 30 subadvisers.

The plaintiffs say in the suit that Prophecy CEO Jeffrey Spotts told them that “ostensibly due to the market volatility surrounding the coronavirus pandemic, the Trading Advisors Fund’s assets in their entirety—totaling approximately $363 million—have been placed at risk.”

The suit describes Kahn only as “Sub-Advisor #1,” though records and interviews confirm that is Kahn. The suit chalks up the potential losses to “Spotts’ and Sub-Adviser #1’s mismanagement.”

Mark Maddox, an attorney with Maddox Hargett & Caruso representing Indie Asset Partners, would not disclose the number of Indie Asset clients that invested in Prophecy or the amount they put in, saying the investment firm considers that information proprietary.

However, he said the number of clients totaled in the mid-double digits and the amount invested is in the mid-eight figures. Those investing included Indie Asset Partners principals, their families and extended families, Maddox said.

According to Indie Asset Partners, Prophecy’s contracts with Kahn require that he restore all losses—terms that potentially could lead to a large recovery. In addition to being founder and managing partner of Florida-based Vintage Capital Management, Kahn serves as CEO of Florida-based Franchise Group Inc., a publicly traded firm that owns such brands as Liberty Tax Service, Buddy’s Home Furnishings, Sears Outlet and The Vitamin Shoppe.

A Securities and Exchange Commission filing says Kahn-related entities own 16 million Franchise Group shares worth $556 million. That includes 6.4 million shares that Kahn owns outright or with his wife.

Prophecy is trying to collect on those losses via an arbitration case it filed against Kahn in May 2020. An arbitrator will hear the case in August and render a binding decision.

Indie Asset Partners said in its June lawsuit that, as of that time, Kahn was offering to pay only partial losses, with payments staggered over time.

Scott Starr, an attorney with Starr Austen & Miller in Logansport who is representing four Indie Asset investors and is in discussions to represent several others, said investors are anxious to see a favorable resolution.

Spotts, who cofounded Prophecy Asset Management in 2001 after spending 12 years at Merrill Lynch, declined to comment. Prophecy, which listed $561 million in assets under management in a February 2020 regulatory filing, took down its website in recent days.

Kahn responded to inquiries from IBJ but had not provided a statement for publication by IBJ’s deadline.

Indie Asset Partners was founded in 2010 by Jay Brammer, who serves as chairman and chief investment officer. He and his brother Tim built Indianapolis-based Gibraltar Mausoleum Corp. into a funeral services powerhouse before selling it to Houston-based Service Corporation International in 1995 for $195 million.

Indie Asset Partners began recommending Prophecy to clients in 2012 as a means to diversify into alternative investments, a hodgepodge of investment classes outside of stocks and bonds. They can include private equity, venture capital, commodities, real estate and private debt, some of which are illiquid and thus difficult to sell quickly.

On its website, Indie Asset Partners says its approach to alternatives is to provide clients “a conservative, absolute rate of return in both bull and bear markets, with lower overall volatility than the stock market,” rather than to swing for the fences in pursuit of huge returns. 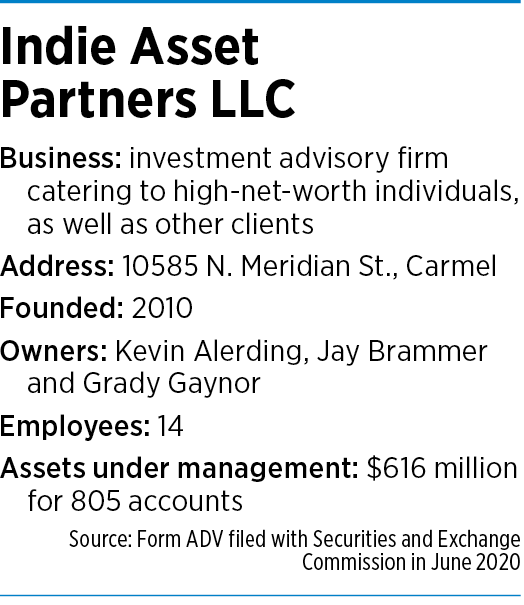 Maddox said one of the appeals of Prophecy was that its Trading Advisors fund required that subadvisers place into escrow at least 10% of the amount they were managing, in order to shield investors from losses of up to 10%. Subadvisers then could use future gains to replenish the escrow account, according to the lawsuit Indie Asset Partners filed last year.

“It was viewed by Indie Asset Partners as a real nice downside protection on an alternative investment,” Maddox said.

But Indie Asset Partners said it became aware in the spring of 2020 that Kahn was not meeting that requirement.

It’s not clear why not. Indie Asset Partners’ lawsuit said Kahn at one point provided a personal guarantee and shares of a publicly traded company to at least partly meet it.

The suit doesn’t identify which company’s stock he pledged. But if it was Franchise Group, that could have been problematic—given that its shares plunged 74% from March 2 to March 16 before beginning to recover.

Maddox said he also does not know why Prophecy got away from diversification across many subadvisers.

“I think it is fair to say that Kahn ended up with a higher allocation than anyone would have thought appropriate, when you have so many other subadvisers to choose from,” he said.

Starr said he is equally perplexed.

“It seems clear that Prophecy did not properly diversify its assets among a large number of subadvisers, which Prophecy promised to do,” he said.

He said Indie Asset Partners also is culpable for failing to adequately monitor what Prophecy was doing.

“It appears to me to be what I refer to as a product problem, where Prophecy, the hedge fund, did not properly monitor and comply with the terms of how it was supposed to be operated,” Maddox said.

The first public signs of trouble at Prophecy surfaced in August 2019, when a grand jury indicted Philadelphia investment manager Brenda Smith, one of the subadvisers for the Prophecy Trading Advisors fund, accusing her of defrauding 40 investors out of $105 million.

According to Indie Asset Partners’ lawsuit, Spotts has maintained that the investment portfolio Smith ran for Prophecy was sold to Sub-Adviser #1 (Kahn) at no loss, but Spotts has refused to provide details.

However, the suit says “there is good reason … to doubt that Cornerstone’s analysis validated Prophecy’s treatment” of the transactions. It says that, when Cornerstone shared its findings with Prophecy’s auditor, Deloitte, the CPA firm resigned as the fund’s auditor and withdrew its opinion covering 2018 financials.

At a minimum, Starr said, the episode raises questions about Prophecy’s judgment.

“Of the tens of thousands or hundreds of thousands of investment advisers Prophecy had to choose from, we know they chose two that were pretty bad,” he said. “That is not a great track record.”

The situation was bleaker at the Indie Diversified Absolute Return Fund, which had a larger portion of assets in Prophesy but less than 50%. That fund’s goal is to generate returns of 6% or greater regardless of market conditions.

Other clients invested directly in Prophecy or invested through First Landing Fund, a fund managed by Virginia-based Vantage Consulting Group that fed assets to Prophecy. A Vantage official did not return calls.

First Landing was a plaintiff alongside Indie Asset Partners in the suit seeking access to Prophecy books and records. The parties settled in September after Prophecy agreed to share information on a confidential basis.

Starr said that confidentiality arrangement might limit what Indie Asset Partners can tell investors, but the information void is nonetheless frustrating.

“When you have investors who have lost significant parts of their retirement funds in this Prophecy investment, it is adding insult to injury that they are not getting detailed reports,” he said.

The legal proceedings have done little to provide transparency. Arbitration is a confidential process, and the judge in the Indie Asset lawsuit has kept many documents under seal and others heavily redacted.

In August, a separate group of investors sued Prophecy and Kahn in federal court in New York, but the complaint is under seal. The docket sheet in the case said the parties have agreed to move their dispute to arbitration. An attorney for the plaintiffs did not return calls.

As all the litigation plays out, Starr said he wants to ensure that the clock does not run out on investors’ claims. He’s negotiating a so-called tolling agreement with Indie Asset Partners to prevent the statute of limitations from expiring.

Indie Asset Partners, meanwhile, is seeking to do the same with Prophecy.

Starr said that, if tolling agreements don’t come together, his clients will stop the clock from ticking by filing their own arbitration case, rather than waiting to see how Prophecy’s case against Kahn plays out.

Starr, who declined to reveal his clients’ names, said the four he represents collectively invested less than $10 million. However, investments will exceed $10 million if other investors he’s talking with jump aboard.

“I’ve got folks who’ve lost a significant percent of their worth,” he said. “When you lose a big chunk, they might not any longer be high-net-worth.”•