Home » Colts to start season with just 2,500 fans in stands under agreement with health officials 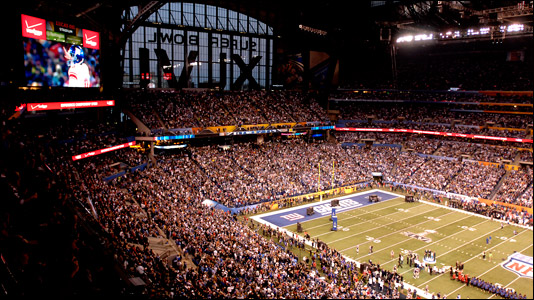 The Indianapolis Colts will be allowed to have no more than 2,500 people at their first home game, as part of an agreement between the team and the county’s health department.

The plan will allow less than 4% of capacity for the team’s home opener at Lucas Oil Stadium against the Minnesota Vikings on Sept. 20. The figure is a significant drop from the team’s previous plan to allow up to 15% capacity to start the season, which IBJ first reported Aug. 28.

“We want to do what’s right and safe—we’re not the health experts,” Pete Ward, chief operating officer for the Colts, told IBJ. “Everybody wants things to be normal. We’re no different. We just have to defer to the health experts on this.”

The team plans to continue meeting with the Marion County Health Department to discuss plans for future games in the coming weeks. Officials will meet next week about the team’s second home game on Sept. 27 against the New York Jets.

Ward said it’s unclear whether fan capacity will be considered week-to-week, because protocols could “change at any time.”

He said the team is holding internal discussions about how to administer tickets for the first home game—far more than 2,500 fans had already bought tickets. The team also must take into consideration allotments for Colts players and visiting players.

IBJ first reported last week the team was looking to reduce capacity from up to 25%—announced in July—to a figure closer to 15%. Lucas Oil Stadium holds about 67,000 fans.

The new capacity plan, which Ward said has been approved by the Marion County Public Health Department, keeps the Colts among just a handful of teams in the National Football League that plan to open the season with fans at their games.

The team submitted an updated health and safety plan to the health department earlier this week.

The Colts collaborated with the NFL, the health department and stadium officials to determine how to safely bring fans to games this season, Ward said. All fans and event personnel will be required to wear masks and socially distance throughout the season, as well as follow a variety of other safety measures.

The Colts still hope to gradually increase the fan capacity throughout the season, with the goal of hitting 25% or more by the season’s end.

But Ward said whatever figure the team settles on for later games will depend on the area’s ability to combat the coronavirus pandemic. The team’s eighth and final home game of the regular season is scheduled for Jan. 3 against the Jacksonville Jaguars.

The team already plans to automatically defer 2020 season tickets to the 2021 season, while offering two half-season packages this year to existing season-ticket holders—each with four games. The first package is composed of home games against Minnesota, Baltimore, Houston and Tennessee, while the second has the games against the New York Jets, Cincinnati, Green Bay and Jacksonville.

Most teams have opted to ban fans at games to at least start the season, while some have decided against in-person spectators altogether, including the Las Vegas Raiders, Chicago Bears, New York Giants and New York Jets. Five teams, including the Colts, are allowing fans in reduced capacities—generally 10% to 25%—while two teams have not yet formally announced their plans.

16 thoughts on “Colts to start season with just 2,500 fans in stands under agreement with health officials”