Home » MIKE LOPRESTI: Colts pop up more often in Super Bowl trivia than in the game itself 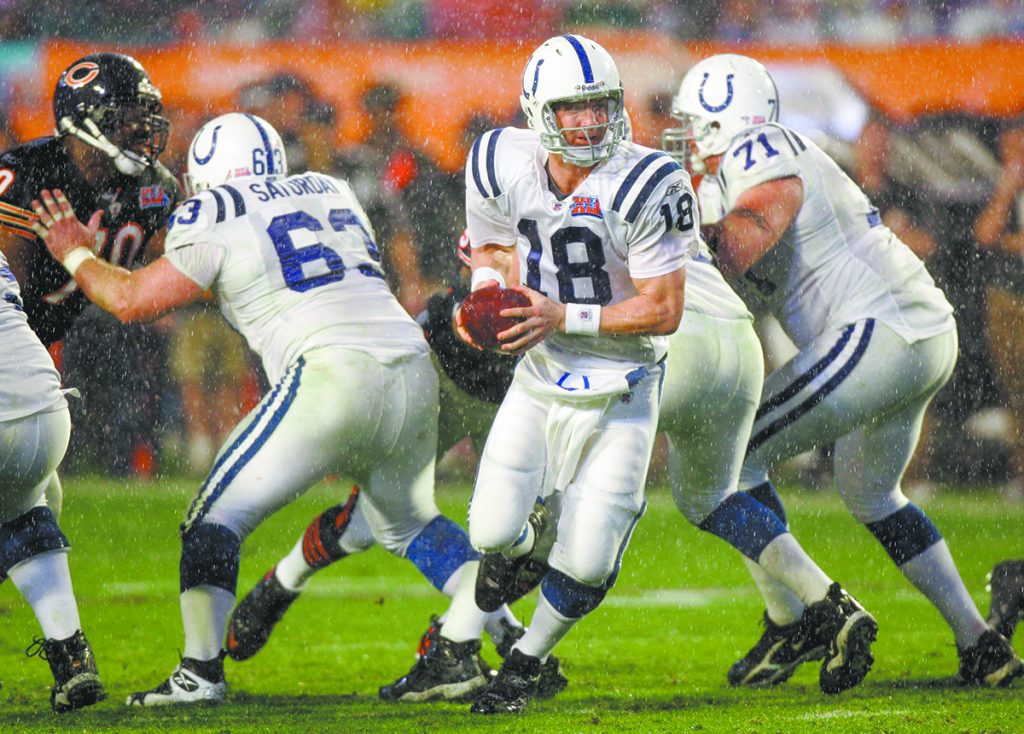 Peyton Manning and the Colts beat the Chicago Bears in the first rain-drenched Super Bowl in Miami in 2007. (AP photo)

Relax, Roger Goodell didn’t disqualify the Kansas City Chiefs and seven other AFC teams to open up a space for any horseshoe helmets in South Florida this weekend. But if you start looking through the Super Bowl record book, you keep bumping into Colts, both of the Indianapolis and Baltimore variety. Until the lads of Lucas Oil get back in the Roman numeral business—13 franchises have been there in the 10 games since Indy last showed up, New England five times—the record book is about as close as the Colts are going to be.

The oldest man to ever play in the game? That’d be Matt Stover, replacing the injured Adam Vinatieri for the Colts in Super Bowl XLIV against New Orleans, at 42 years and 11 days. Tom Brady would have passed Stover this year had the Patriots made it.

The oldest individual Super Bowl record still in the book? Tom Matte’s 10.5 yards per carry, for the Baltimore Colts against the New York Jets in 1969.

The Super Bowl opponents who were geographically closest? Super Bowl XLI, with Indianapolis and Chicago. Though anyone driving on Interstate 65 from one to the other during construction season might not get the idea they’re all that close.

Quickest score in Super Bowl history? Seattle’s safety against Denver only 12 seconds into Super Bowl XLVIII. That beat the old record by two seconds—Devin Hester’s 92-year return of the opening kickoff for the Bears against the Colts. By the way, Peyton Manning’s team was on the wrong side of both of those.

Most lost Super Bowl coin tosses? The Patriots, by a bunch. They might do fine winning the game, but Bill Belichick and Brady are 1-8 in coin tosses. Now if you want the worst percentage, that’d be the Colts. They’ve never won one, heads or tails, going 0-4 in Indianapolis and Baltimore.

Most frequent Super Bowl host? South Florida, with this being its 11th. The Colts are a major contributor to that record since they’ve never played in the game anywhere else. Baltimore appeared twice in the Orange Bowl. Indy beat Chicago in Sun Life Stadium, and lost to New Orleans in Dolphin Stadium, except those are the same place. Just like John Elway played his final game in Pro Player Stadium and Joe Montana’s last-minute touchdown pass beat Cincinnati in Joe Robbie Stadium, and the Chiefs and 49ers will be in Hard Rock Stadium Sunday. All the same address. That facility has more aliases than someone on the FBI Most Wanted List.

Coaches who led their teams to the Super Bowl their first season? Only seven. One of them was Jim Caldwell with the 2009 Colts. Two years later, he was gone.

Coldest Super Bowl? Dallas and Miami kicked off in 39 degrees in Tulane Stadium in Super Bowl VI. P.S. It was 44 degrees outside in Indianapolis when the Patriots and Giants went at it in Lucas Oil Stadium, so the roof could have been open and we still would have been warmer than New Orleans.

The first rainy Super Bowl? The Colts didn’t seem to mind, but the Florida skies were leaking all day when they beat the Bears.

Best example of the evolution of halftime shows? The Colts will do. When they won as the team from Baltimore, the halftime performance was the Florida A&M marching band. By the time Indianapolis showed up to win, the performer was Prince.

Cheapest published Super Bowl ticket prices? Go back to the early days. It cost only $12 to see the Colts get upset by the Jets in 1969. It cost $15 two years later to see the Colts beat Dallas. By the time Peyton Manning led the Colts over the Bears in 2007, it was $700. When Indianapolis lost to the Saints three years later, it was $1,000. On the secondary market early this week, the average was well above $6,000.

Best buy for television advertisers? One would certainly be the Colts’ famous loss to the Jets in Super Bowl III. To be part of that historic day cost only $55,000 for a 30-second ad during the broadcast. Now, it’s more than $5.5 million. Darius Leonard was named to the Pro Bowl for the Colts, and his entire contract could buy you about nine seconds to sell Budweiser.

Latest Super Bowl date? Feb. 7, twice. One was the day the Saints pulled off that second-half onside kick to doom the Colts. The NFL calendar has changed a bit. The Baltimore Colts played in their first Super Bowl on Jan. 12.

Men who have both played for and head-coached a Super Bowl champion? You can count them on one hand. Only four. One is Tony Dungy.

Biggest comeback to win a Super Bowl? That was the Patriots wiping out a 25-point deficit to beat Atlanta in overtime. But before that, the biggest margin had been 10 points. Colts, 10; Saints, 0—remember?

Highest career Super Bowl quarterback rating? Joe Montana in a runaway, with his 11 touchdown passes and no interceptions in 122 attempts. Something unusual about the top 10 in this category. Tom Brady ain’t on it. Neither is the guy with the statue outside of Lucas Oil Stadium. Matter of fact, Manning’s numbers in his four Super Bowls for Indianapolis and Denver are rather pedestrian—three touchdown passes, five interceptions. Nothing pedestrian about his two championship rings, though.

Super Bowl MVPs who played for the losing team? Just one. Dallas linebacker Chuck Howley in Super Bowl V. The Baltimore Colts won the game 16-13 but apparently nobody shined brightly enough to get the votes.

Leading scorer in Super Bowl history? Jerry Rice with 48 points, catching eight touchdowns for the 49ers and Raiders. Second is Adam Vinatieri, way back at 34.

Most efficient passing day in Super Bowl history? Phil Simms threw 25 passes and completed 22 for the New York Giants against Denver. But right behind, at 32-for-39, is New Orleans’ Drew Brees. He did that against the Colts defense.

Super Bowls with no turnovers? Only two of the 53: the Giants over Buffalo and the St. Louis Rams over Tennessee. One of the higher turnover Super Bowls was when the Colts and Bears combined for eight.

Most common jersey worn by a Super Bowl winning quarterback? No. 12, in 17 of the 53 games. The fact that Tom Brady is No. 12 has considerably padded that total. There has been only one quarterback to win a Super Bowl wearing No. 18. Wanna guess who that was?

Take your time. Hint: Walk down to the corner of Capitol Avenue and South Street and look around for a statue. Relive the good old days and ponder this question for Super Bowl Sunday:

What will come first, the Colts playing in another Super Bowl, or Indianapolis hosting another?•