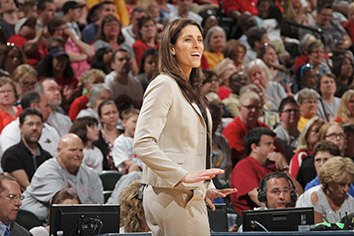 Stephanie White was head coach of the Indiana Fever from 2015-2016. (IBJ file photo)

White succeeds Curt Miller, who left to coach Los Angeles last month. She has a combined 15 seasons of experience as a player and coach in the WNBA, most recently as the head of the Indiana Fever in 2015-2016.

“Stephanie White is the right coach at the right time for our organization. She’s a proven winner that understands the high expectations we have within the Connecticut Sun organization and our fan base,” Connecticut Sun President Jen Rizzotti said. “She has been a part of championships as both a player and a coach, and that is the mentality I was looking to add. I’m excited for our players who will be under her guidance, and I look forward to supporting and welcoming her back to the WNBA.”

White left the Fever to take over at Vanderbilt. She was the head coach there from 2016-21.

She inherits a talented team in Connecticut that lost to Las Vegas in the WNBA Finals last season. The Sun have 2021 league MVP Jonquel Jones and star Alyssa Thomas back for next year.

“I am thrilled to be a part of the Connecticut Sun family,” White said. “I have admired the organization from afar since its inception and am looking forward to building on the strong foundation that has been established. I want to thank Jen Rizzotti, Kevin Lowry and the Mohegan Tribal Council for this opportunity, and I look forward to working with a tremendous group of women toward the ultimate goal of winning a WNBA Championship.”

White, who won the 1999 NCAA title while playing for Purdue, was drafted 21st that year by the Charlotte Sting. She played in Charlotte for one season before playing in Indiana for four years. White served as an assistant with the Fever when the Fever won the 2012 WNBA title.