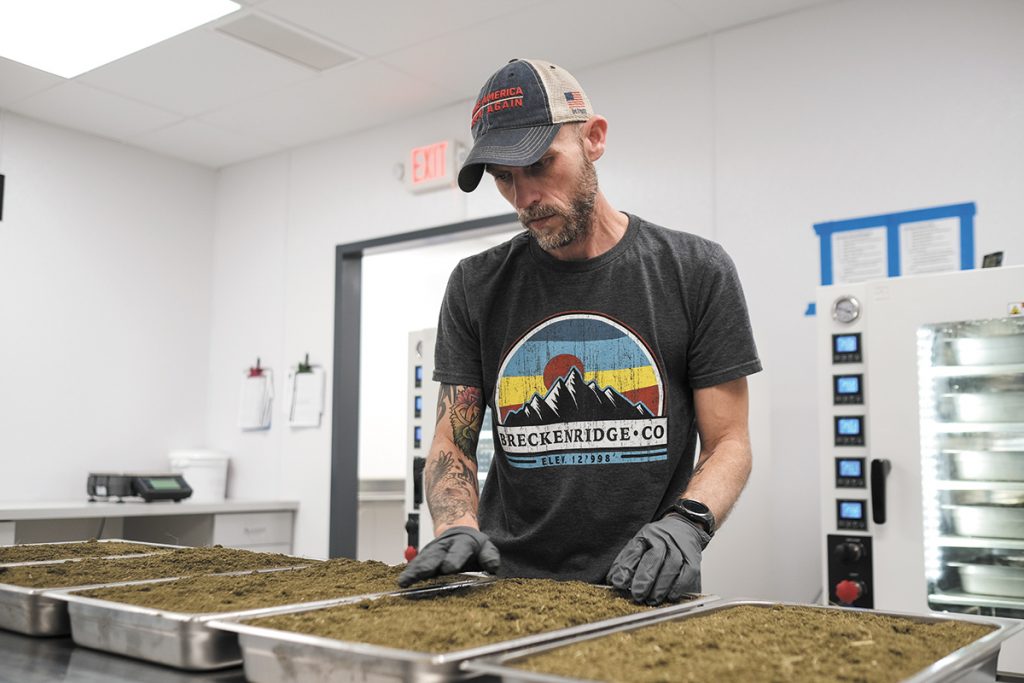 Wes Holcomb of NXT Labs prepares dried hemp (hemp biomass) to be heated and processed into crude hemp oil on its way to distillation as CBD oil. (IBJ photos/Eric Learned)

Hemp-processing companies are investing millions of dollars into refineries across Hamilton County to close a gap in the state’s CBD supply chain.

Cannabidiol, otherwise known as CBD oil, can be extracted from the hemp plant for use as a dietary supplement. Companies use CBD oil in tinctures, lotions, oils, coffee, beauty supplies or any other item that might stand to gain from the health benefits associated with CBD.

Purported health claims include CBD as a treatment for inflammation, anxiety, sleep disorders, epilepsy and a host of other ailments.

According to the Brightfield Group, a Chicago-based market research firm, the CBD market topped $4 billion in 2019 and could reach $24.4 billion by 2025.

But in Indiana there’s a bottleneck.

Industry experts say hemp is piling up in Indiana barns because of a shortage of buyers, and that’s even though the state’s 100 outdoor and 30 indoor grow operations harvested nearly 2,000 fewer acres of hemp than they’d planned in 2019.

“The biggest issue with the industry isn’t whether anything is commercial or research, it’s whether there’s a company or a person to buy your crop,” said Don Robison, a seed administrator with the OISC.

Nearly three-quarters of the 248 researchers, growers and farmers who responded to a state survey did not make a profit in 2019, and 61% did not sell all of their harvest.

Robinson said that’s largely because only a couple of the 50 companies licensed in Indiana to process hemp into CBD oil actually got off the ground last year.

He said farmers will have more options in 2020 as extraction facilities ramp up.

Among the entrepreneurs getting into the extraction business is John Bales, who in 2015 launched Biodynamic Ventures in Colorado. The firm develops mother plants, then sells clones of those plants to farmers who use them to grow hemp.

Today, the company and its subsidiaries operate two greenhouses in Colorado and four in the Indianapolis area, as well as a research and operations center on Indianapolis’ south side.

A year ago, Bales reached out to Portland, Oregon-based Zelios to buy an extractor. But instead of selling him the machine, Zelios partnered with Bales, and the two found a home for the equipment at Westfield-based Thieneman Construction, 17219 Foundation Parkway. 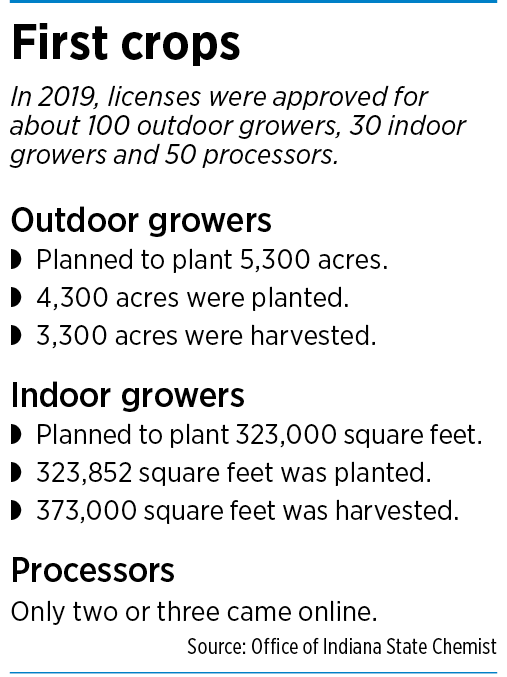 The three companies formed BDX-Indiana, and in October 2019 they announced plans to invest $24 million to create a 10,000-square-foot extraction facility.

“I’ve literally seen CBD extracted out of barns before, by a car up on blocks. We have to bring down this notion of the Wild, Wild West,” Bales said.

“When this got legalized, it really gave us the opportunity really to start from scratch east of the Mississippi with good-quality farmers—competent, non-cannabis-related people.”

Hemp-processing facilities take in farmers’ hemp, called hemp biomass, and prepare it for CBD extraction. The crops are tested for heavy metals, pests, herbicides and other toxins before they’re approved for use.

Then, processors use a specialized oven to activate the acids within hemp that the general public knows as CBD. After that, they use either ethanol or carbon dioxide to extract from that baked biomass hemp crude oil, the first step toward distilled CBD oil.

Already, BDX-Indiana has spent more than $200,000 on power upgrades, $2 million on other facility improvements and nearly $4 million on four, 300-liter extractors and other equipment to provide those processing services. 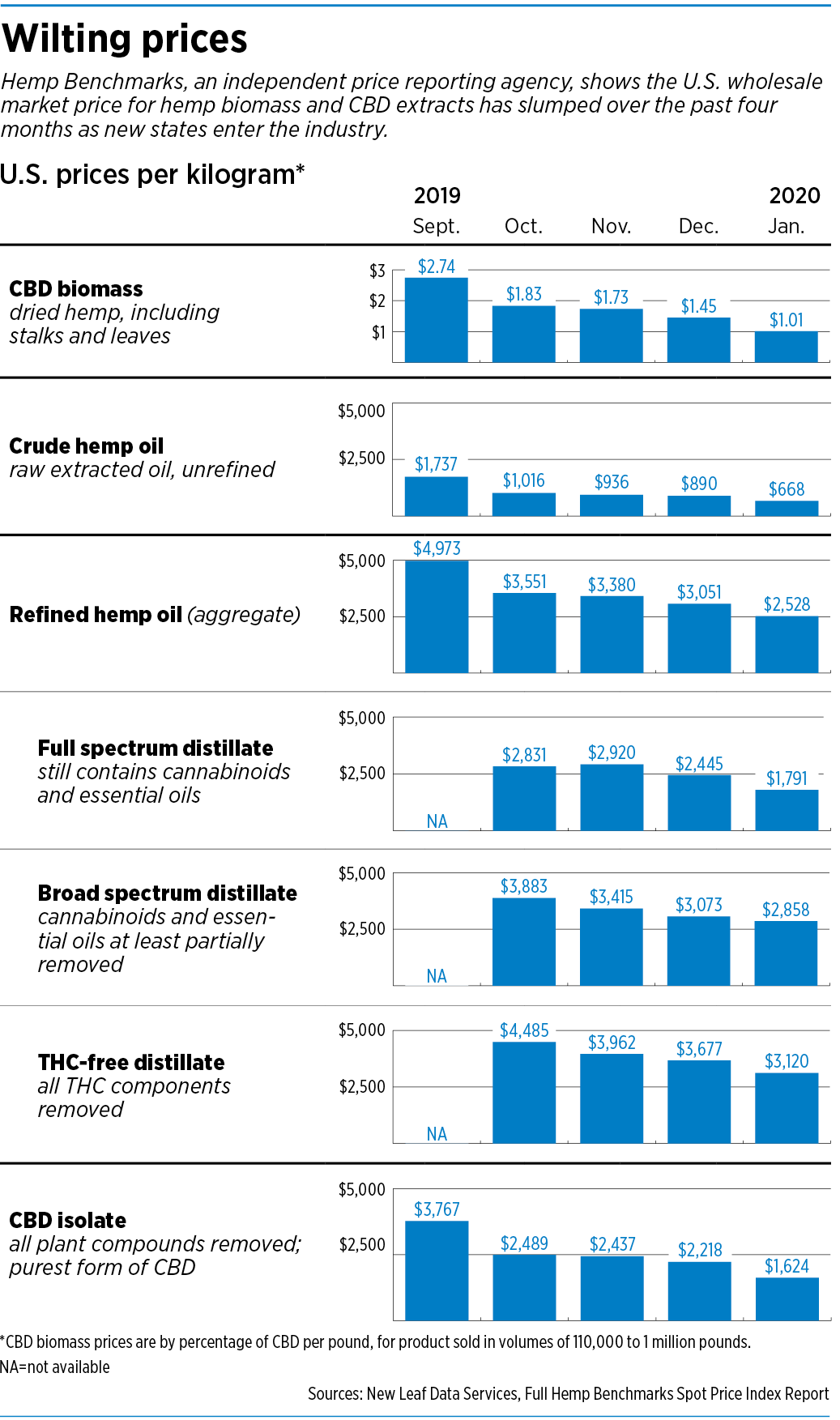 When the first phase comes online in mid-February, BDX-Indiana will be able to accept 2,000 pounds of hemp biomass daily to produce 2,500 kilograms of CBD distillate each month.

In March, BDX-Indiana will bring in a 2,500-liter extractor to boost intake to 4,500 pounds per day and quadruple monthly output to 10,000 kilograms of distillate.

The company said it plans to launch a $15 million second phase later this year, which will allow it to process more than 5 million pounds of hemp biomass annually.

“You got a lot of farmers that grew this year with nobody to take it off their hands,” Bales said. “We’re spending the money to do this because we actually have the distribution; we have the avenues to do this.”

It’s a labor-intensive operation. Bales already has hired 40 employees and plans to bring on another 140 in the next three years. He said the Westfield location allows the company to draw workers who honed skills at such companies as Dow AgroSciences, Eli Lilly and Co., Heartland Food Products Group and Purdue University.

“We have a lot of talent in Indiana, and I’ll tell you what—that talent doesn’t exist in Denver,” Bales said.

One of the customers for Biodynamic Ventures’ clones last year was Zionsville farmer Andy Mitchell, who, after meeting Bales through a friend, decided to devote some of his 5,000 acres to hemp.

A farmer for more than 40 years, Mitchell traditionally had stuck to corn and other row crops.

“I’ve always been an entrepreneur, and it’s a good portfolio to have, to be diverse,” Mitchell said. “I’ve never been afraid to try new things, but it was a trying year. Everyone had to learn from the ground up.”

In his first year, he gradually increased hemp production from five to 50 acres, overcoming unusually heavy rains and other obstacles, including heavy winds that ripped up plastic lining and forced him to re-crate 5,000 plants.

“For what we went through, I felt we had a pretty good outcome,” Mitchell said. “I just think of it as another commodity, another grain commodity.”

Biodynamic Ventures protects farmers from being stuck with barns of unsold hemp by selling them only as many clones as are needed to grow hemp for which it has buyers.

The company also looks to avoid non-compliant plants—those with THC levels that exceed legal limits—by providing farmers with one of 21 genetic strains of low-THC hemp.

In fact, newly formed NXT Labs in January launched a 6,000-square-foot extraction facility at 17727 Commerce Drive in Westfield—less than a mile from BDX-Indiana.

Toby Holcomb, an executive vice president with Meyer Najem Construction in Fishers, and his son, Wes, formed the company with a Colorado-based processor.

The father became a believer in CBD oil after trying oil that Wes had been selling online and through his Nice-xtracts store in Carmel.

“I was having a lot of inflammation in my lower back from arthritis,” Holcomb said. “I called him and said, ‘I tell you what—if you give me a bottle and it works, I’ll invest in you.’”

He self-financed the $2 million facility, but has since turned to traditional financing through a bank loan to make sure the business keeps growing.

“That took a long time,” Holcomb said. “We struggled with other banks that didn’t want to get involved.”

Justin Swanson, president of the Midwest Hemp Council, said no bank in Indiana is promoting itself as the place for companies working in the hemp industry to do their banking.

But BDX and NXT have found support from state economic development leaders.

BDX reached an agreement with the Indiana Economic Development Corp. to create up to 180 jobs over the next three years. In exchange, the company is slated to receive up to $2 million in tax credits.

NXT Labs’ three, 200-liter extraction machines are able to process 200,000 pounds of hemp to produce 9,000 kilos of crude oil per year. Holcomb said he hopes to double that amount in 2021.

It’s an ambitious goal for a crew of just seven employees, but Holcomb plans to bring that number closer to 20 by the end of the year. And if he continues to hit his targets, NXT Labs will have 50 employees by 2022.

To support that increased production and bring more of the process in-house, NXT Labs plans to open a satellite laboratory—also in Westfield—later this summer.

Another father-son duo in Hamilton County also sees a big opportunity in extraction.

The company so far has focused on researching optimal strains for cultivation, harvest and extraction. It recently moved into testing, opening a 1,600-square-foot lab and office space at 1052 Summit Drive in Carmel, as well as a 2,200-square-foot research and development cultivation center in Carmel.

Though he’s been able to privately fund his $225,000 operation so far, Schroeder is pursuing $2 million in financing this year—capital that would allow him to move into processing and expand his cultivation operations and laboratory.

“The last piece to be a vertically integrated player is to add extraction,” he said. “We’re moving full speed ahead, but one of the issues in this industry is trying to find banks that will work with you. I feel like, a lot of times, I’m making the banks more knowledgeable about the industry, but they’re still not ready yet.”

Schroeder said Agrozen will start small, likely processing around 11,000 pounds of hemp annually with its first machine. As the company ramps up, Schroeder said, he anticipates growing his workforce from four to around 30.

“Businesses that are starting small, growing organically and making smart decisions are going to make it in the long run,” he said. “There are a lot of people getting into the business, but I also see a lot of people falling out. Taking a conservative approach to this is smart.” 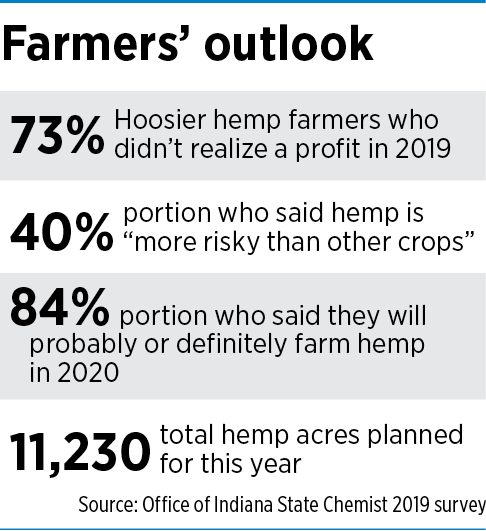 Robison said Hamilton County communities are seeing some of the largest hemp investments in the state.

He sees opportunity in the field, but he also urges caution. He doesn’t expect the explosive growth some market forecasters project.

“There’s a strong feeling among a lot of people in the hemp industry that CBD will have another year or two of expansion, then it will level off or drop off,” Robison said.

“If you’ve got the money, go for it. If you don’t have the money, it’s not the time to go out and borrow that.”

“I’m not telling you that we’re doing exactly what we’ll be doing next year or the year after, because it’s evolving,” he said. “But when you’ve got a high-quality and ethical farmer that’s not breaking the rules and a good-quality product I can extract without manipulating, then I can produce good-quality CBD products.”

Holcomb said he plans to stay in processing as long as CBD is in demand. But he said that, if it falls out of favor, NXT Labs could pivot into becoming a botanical extractor, processing lavender or pine.

“The market changes all the time of what end users, the people, are looking for,” Holcomb said. “We need to follow that, whatever it is.”•