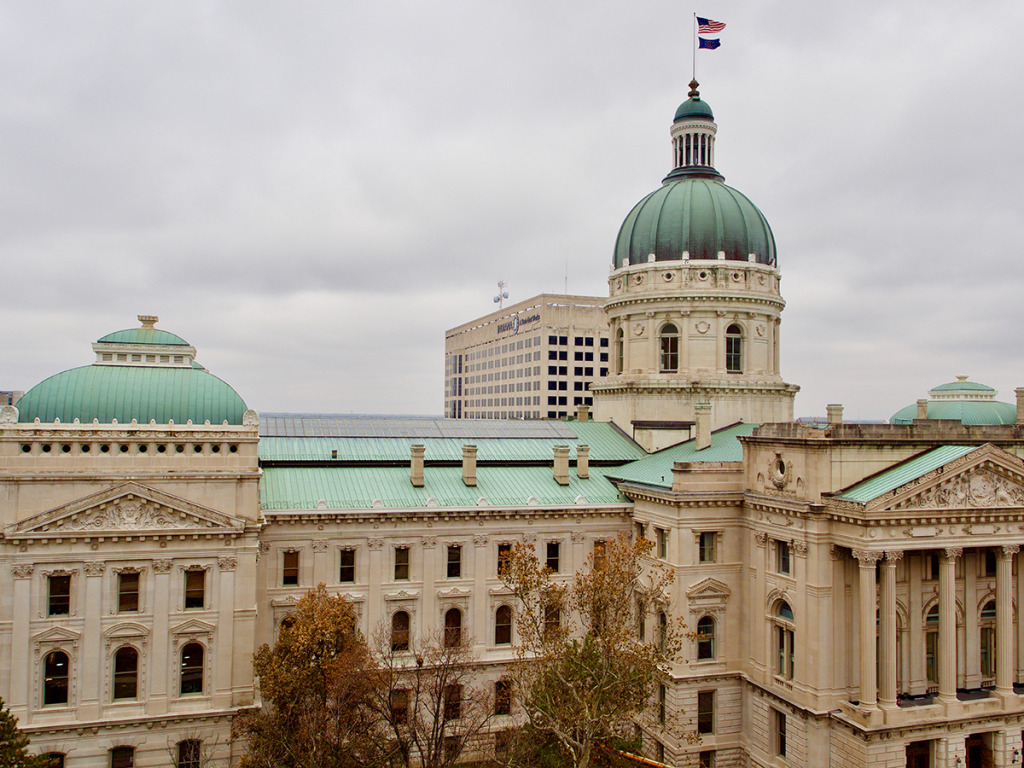 As Indiana lawmakers prepare to craft the state’s next two-year budget, leaders promise K-12 education will be the top priority—but they also acknowledge that every line item in the spending plan is at risk of cuts.

Tax revenue has fallen dramatically since the pandemic began and is expected to remain lower than would have otherwise been expected, a product of slowed economic activity and high unemployment. So, as lawmakers have fewer dollars to work with, demand for dollars is higher.

That could mean tough choices.

“Everything’s on the table, but we still have our core priorities and those won’t change,” House Speaker Todd Huston said.

The current two-year budget, which passed in 2019, totaled $34.6 billion and included increases for K-12 schools, the Indiana Department of Child Services and several workforce development programs. When it passed, lawmakers projected it would leave the state with more than $2 billion in the bank.

But that was before restaurants and entertainment venues were shuttered for weeks. And before thousands of Hoosiers suddenly lost their jobs, sending the unemployment rate sky high in the spring.

By the time the state ended its 2020 fiscal year on June 30, revenue had fallen $1.4 billion behind projections, resulting in a budget deficit of nearly $900 million.

That caused the state to dip heavily into its reserves, which had been at $2.3 billion but now sit at $1.4 billion—the lowest level since 2011.

The state’s economy has started to recover, with unemployment dropping to 5% in October, after peaking at 17.5% in April. That’s helped the state’s revenue stream, which is largely reliant on sales and income taxes. The October revenue report showed tax collections were actually 1.1% higher than expected.

But several questions that could impact the 2021-2023 budget—which will take effect July 1—remain unanswered, such as when a COVID-19 vaccine will be widely distributed, when the economy will fully recover and whether Congress sends states more federal aid next year. And it’s unclear how many answers lawmakers will get before they’re expected to adjourn their 2021 session at the end of April.

“Certainly, they face unprecedented challenges given all the volatility,” said Chris Watts, president of the Indiana Fiscal Policy Institute. “They’ve really got their work cut out for them.”

Lawmakers will heavily rely on a revenue forecast that is scheduled to be released Dec. 16 as they begin writing a budget draft. A second revenue forecast will be published in April, before lawmakers approve the budget, allowing them to make adjustments if necessary.

“I’m cautiously optimistic,” said Indiana Democratic state Rep. Greg Porter, the ranking Democrat on the GOP-controlled House Ways and Means Committee. “I think the bottom line will be where will the April forecast be.”

Gov. Eric Holcomb and his staff declined to comment for this story, other than to say officials “look forward to reviewing the upcoming revenue forecast.”

Both Republicans and Democrats say they don’t want to reduce funding to K-12 schools.

“In fact, we want to give it a bump,” said Senate President Pro Tem Rodric Bray, R-Martinsville.

And Porter said cuts to public education “should be off the table.”

But protecting—or even increasing—education funding might be easier said than done. Funding for K-12 accounted for nearly half of the state’s $17.4 billion budget in fiscal 2020.

In the 2019-2021 budget, lawmakers increased funding for K-12 education 2.5% each year and allocated $74 million for other programs, including the Teacher Appreciation Grant and the Secured School Safety Grant. That budget also allowed the state to spend $150 million from its reserves to shore up future teacher pension obligations, a move that was expected to save schools $70 million each year.

But Bray said it’s unlikely the Legislature can give schools the same kind of increase in the next budget. A goal will be not to cut.

“We’re going to be advocating that lawmakers keep to their promises to fully and equitably fund public schools,” said Indiana State Teachers Association President Keith Gambill. “The last thing that should happen is if we were to go backward. You’re just digging a bigger hole.”

Education advocates say any cuts would be devastating to schools, which are already struggling to attract and retain teachers.

But keeping education funding at least flat means every other line item is in danger of cuts.

Senate Appropriations Chairman Ryan Mishler, who will write the Senate’s version of the budget, said that puts the onus on agencies and organizations to justify their requests.

“I definitely wouldn’t come ask for more money,” Mishler said. “I would come forward and try to explain why that particular organization should even be in the budget. They need to defend what they’re getting, not ask for more.”

K-12 education, higher education and Medicaid together account for more than 70% of the state’s budget. Finding enough cuts to make the budget balance within that remaining 30% will be difficult.

“How do you make that math work?” Watts said.

Former Republican state Sen. Luke Kenley, who served as chairman of the Appropriations Committee during the last economic downturn, said he’d view this upcoming budget as an opportunity to find ways for the government to operate more efficiently. 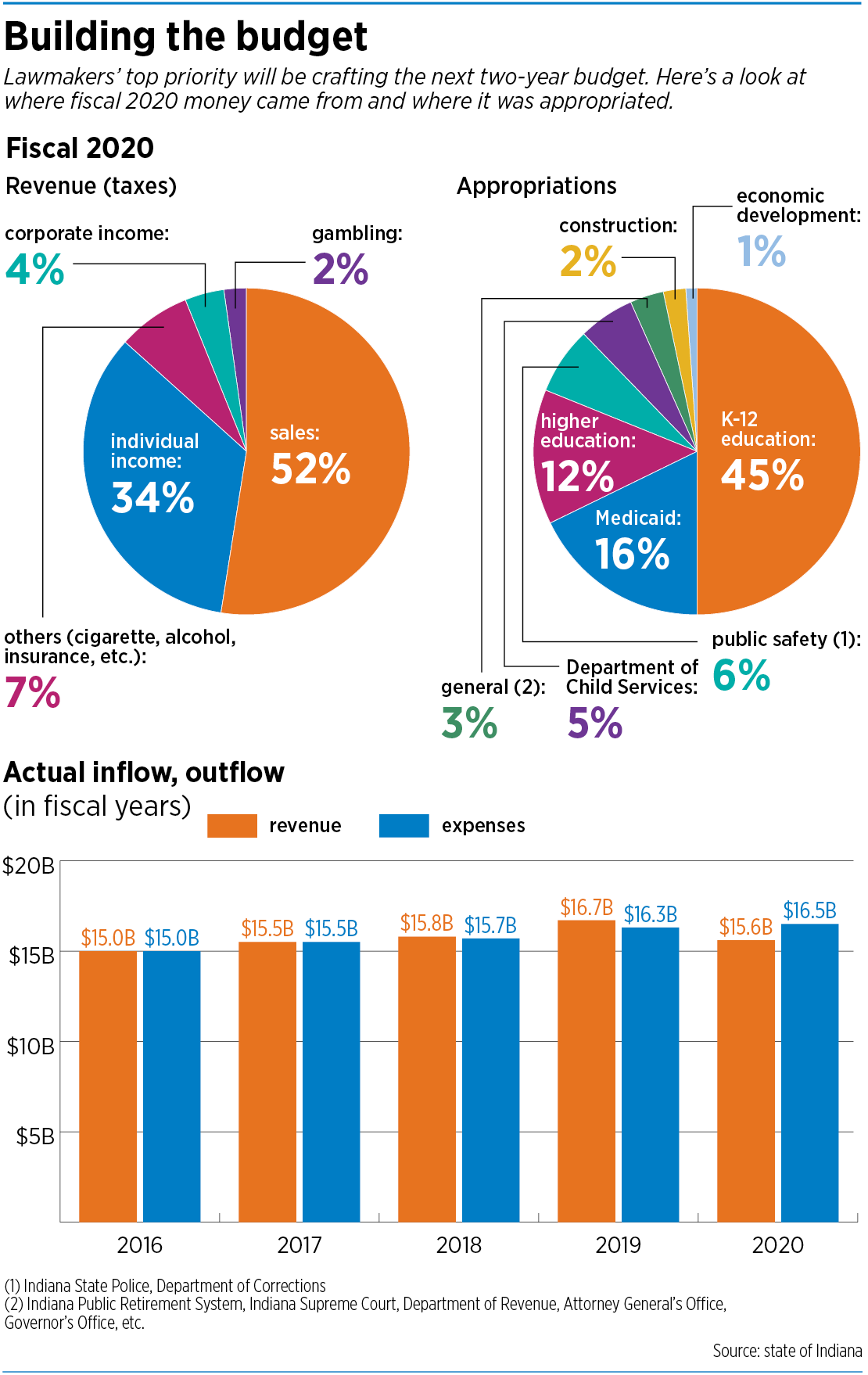 “It will be a good challenge,” Kenley said. “I would be looking forward to working on next year’s budget.”

One area he said he’d look at is the Department of Child Services, which he admitted wouldn’t be a popular suggestion, but he thinks it could be improved.

“Somehow, we haven’t figured out the nuts and bolts of how to do that well,” Kenley said. “I bet we could begin to gain some ground in that area, and I don’t think it has to cost us any more money.”

Kenley said it will be up to budget writers to have tough conversations.

“This is the beginning of how you reform things,” he said. “If you can make the right choices in terms of what you cut, then you can do better.”

It’s possible some of those tough conversations will revolve around some of Holcomb’s popular workforce and economic development programs, such as the Workforce Ready Grant, Employer Training Grant or the 21st Century Research and Technology Fund.

Funding for the Workforce Ready Grant and the Next Level Employer Training Grant doubled annually in the current budget. And Holcomb’s administration pumped $50 million in CARES Act funding into the programs this year to expand them to help people hurt by the pandemic.

The 21 Fund, the state’s primary tool for promoting startups, entrepreneurship and R&D, nearly experienced a funding drop in the 2019-2021 budget. The Senate voted to cut $8 million annually from its $30 million-per-year allocation, but the final budget restored the funding to $29.75 million per year.

Top budget-writing Republicans say they know those programs help close the skills gap in the workforce and are generally beneficial to the state’s economy, but that doesn’t mean they’ll be safe from cuts.

“I don’t know what’s realistic,” Huston said. “We absolutely recognize the importance of all of those programs. … That’s on that priority list.”

House Ways & Means Chairman Tim Brown said he won’t make any promises on any of part of the budget, including the workforce and economic development programs.

“Most of the programs are sprinkles,” DeLaney said. “They recognize a problem and they pretend to deal with them.”

He said it’d be more impactful to have more funding in education.

“Nothing concerns me like our educational responsibilities,” he said.

No appetite for tax hikes

Despite the challenges, Republicans say they are confident no tax increases will be necessary to balance the budget.

“That would be the last thing we look at,” Bray said.

The only tax increase that seems to be on the table is a boost in the cigarette tax. But lawmakers say that would not be used to fill a hole in the budget because the revenue would likely shrink over time. The goal of the tax is to reduce smoking, therefore reducing how many cigarettes are sold.

If anything, lawmakers say a bump in the cigarette tax would be used to address public health challenges.

The Indiana Chamber of Commerce has unsuccessfully lobbied for years to increase the cigarette tax. The issue is on the organization’s legislative agenda again this year.

Porter said the budget would be in a better position now if Republicans had not approved so many tax cuts in the past. For example, the corporate income tax has been gradually declining for years and is scheduled to drop to 4.9% by 2022.

Watts said one thing that has helped the budget situation is the action lawmakers took in 2019 to close a loop in online sales and hotel tax collection.

“That’s been a pretty big deal in keeping sales tax revenue pretty stable,” he said. “It was notable at the time, but the importance has been amplified.”

Top lawmakers say they are committed to ensuring the budget has healthy reserves, but how much is unknown.

Brown said 10% might be the right target. That percentage would be lower than it has been in years, but the total dollar amount could be higher if the budget grows.

“The issue is, as our budget grows, that number grows,” Brown said. “We’ll just have to look at all the priorities and what people think going forward.”

No one seems to expect reserves to climb back to $2.3 billion anytime soon.

“You’re not going to see us have the ability to replenish that surplus back to the number we had before the pandemic,” Bray said. “It’s going to have to be done over time.”•