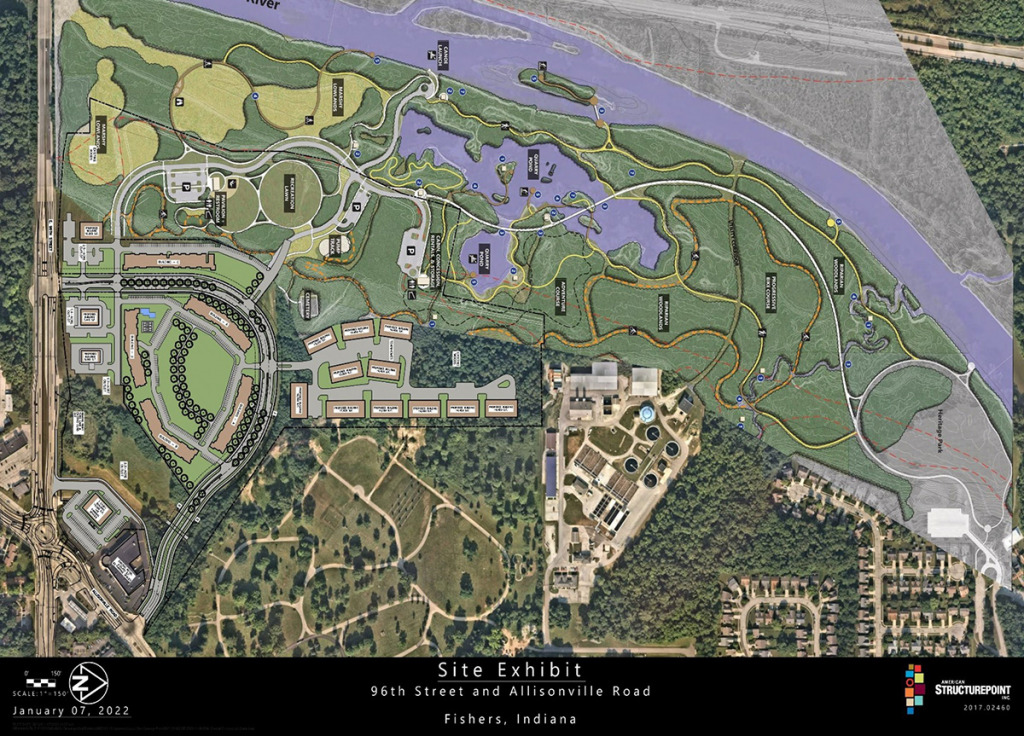 A rendering of CRG Residential's proposed development and adjacent park land at 96th Street and Allisonville Road. (Rendering courtesy of the city of Fishers)

Carmel-based developer CRG Residential is planning a $98 million project on Allisonville Road in Fishers that will contain apartments, townhomes and retail space, while donating 25 acres of land to beef up a recently announced city park along the White River.

The project is slated for the northwest corner of 96th Street and Allisonville Road, which will require the city to reconstruct the adjacent “Michigan Left” turn on Allisonville Road as a roundabout, the city announced on Thursday.

As proposed, the project will include 380 apartment units, 66 townhomes for sales and 35,000 square feet of new retail space. CRG has committed to donating the land required for the roundabout, as well as the 25 acres of non-floodplain land that would increase the size of the planned White River passive nature park to 123 acres.

The city’s release on the project described working in “close partnership” with CRG.

“This project will enhance the southwest corridor of our community in multiple ways,” said Fishers Mayor Scott Fadness in the media release. “The new park, and now the additional buffer zone donated by CRG, will serve as a key amenity for our city and region, providing expanded public access to one of our community’s greatest natural assets—the White River.

“And as we bring the roundabout intersection online, the additional vehicular traffic will be able to better access the local businesses in the area as a gateway to our city.”

The Fishers City Council is expected to consider a project agreement for the development at its Feb. 21 meeting. A presentation from CRG and Fishers Economic development officials is expected to include more project details and a proposal for bond financing.

The financing would include CRG’s request for $23 million in developer-guaranteed bonds over a term of 25 years.

“We are excited about the opportunity to invest in this important corridor of the city and to enhance its value to the community,” said CRG President Christopher Reid in the city’s media release. “There are so many dynamic pieces to this development, particularly the park and greenspace along the White River which will provide access to the overall community.”