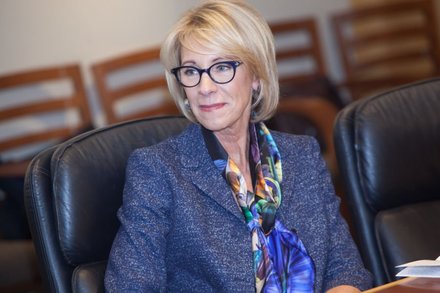 Biden has said that canceling at least a portion of the $1.6 trillion in student debt held by 44 million Americans is part of his economic recovery plan. He has supported at least $10,000 in federal loan forgiveness per loan recipient, while other leaders in the Democratic Party, including Sens. Charles Schumer of New York and Elizabeth Warren of Massachusetts, are calling for the cancellation of up to $50,000.

“We’ve heard shrill calls to cancel, to forgive, to make it all free,” DeVos said in her speech. “Any innocuous label out there can’t obfuscate what it really is: Wrong.”

Since taking office, DeVos has been accused by liberal lawmakers and consumer groups of going out of her way to limit loan forgiveness through existing federal programs.

The secretary imposed a methodology that curbed debt cancellation under a federal program known as “borrower defense to repayment.” That program, which dates to 1994, provides federal loan relief to students whose colleges lied to get them to enroll. DeVos scrapped an Obama-era overhaul of the law that made it easier to seek forgiveness and accused opposing lawmakers of wanting “blanket forgiveness for anyone who raised their hand.”

The Trump administration’s refusal to process applications for months, delay of the Obama rule, subsequent partial relief formula and widespread denials have resulted in a spate of lawsuits.

Biden campaign national policy director Stef Feldman said in October that the Obama-era update of the borrower defense rule would be revived. That would require lengthy rulemaking at the Education Department. But in the meantime, a Biden administration could clear out the backlog of borrower defense claims using a more generous methodology for approval and loan forgiveness.

On Tuesday, DeVos took aim at another popular policy backed by Biden: Tuition-free college. She called the policy “a matter of total government control” and “a socialist takeover of higher education,” with ominous predictions about how it will reshape the sector.

“None of you would like the way it will work,” DeVos told financial aid professionals on Tuesday. “You won’t like being forced to tell students they aren’t eligible to attend your school, or that they aren’t allowed to choose the degree program they want, or that your quota for ‘free college’ students is full and that they now have to pay full price.”

DeVos warned financial aid officers that they will be “forced to merely oversee rationing of state-approved higher-education options.” Colleges and universities, she said, will “begin to resemble a failing K-12 school, with the customer service of the DMV to boot.”

It is a striking position on a policy that has garnered bipartisan support in recent decades. There are 30 states that cover tuition at community colleges or universities, part of a national movement to use higher education to strengthen the local economy. College Promise programs, as tuition-free initiatives are commonly known, have resonated with elected leaders across the political spectrum.

Biden has pledged to make such programs universal by covering tuition at public colleges and universities for all students whose family incomes are below $125,000. He has proposed that the federal government cover 75% of the cost and states contribute the rest, a policy that could be a heavy lift in Congress.

Similar to other opponents of tuition-free college and debt forgiveness, DeVos argues that the policies are unfair to taxpayers.

“Nothing is free. Somebody, somewhere, pays the bill. And the bill is coming due,” DeVos said. “What we do next in education policy—and in public policy writ large—will either break our already fragile economy, or it will unleash an age of achievement and prosperity the likes of which we’ve never seen.”

But to Biden and many liberal lawmakers, easing the financial burden of higher education will play a crucial role in delivering economic prosperity.