But as painful as that might be, White can’t state with certainty that the bearishness is overblown.

“The big question is, how deep and how long,” White said of the human toll wrought by COVID-19 and the economic disruption it’s causing. “I don’t know the answer.”

CEOs at other Indiana public companies know the feeling. While they might want to reassure investors during these uncertain times, they, like the rest of us, don’t know what the future holds.

That reality is reflected in the fact that many of Indiana’s 54 public companies have withdrawn their earnings guidance for the year, even as executives emphasize their belief that they are positioned well for the long term.

The dance is especially tricky for companies in the throes of momentous acquisitions, such as Greenfield-based Elanco Animal Health Inc., which in August announced it was buying the animal-health unit of Germany-based Bayer AG for a lofty $7.6 billion.

Even at the deal’s unveiling, some analysts thought Elanco was taking on too much with the acquisition, which necessitates that the Greenfield company take on billions of dollars in additional debt.

In a March 24 press release, Elanco CEO Jeff Simmons declared his intention to complete the deal, despite the negative sales fallout his company is experiencing from the shutdown of vet clinics for all but emergencies and acutely ill animals.

When Simmons rolled out the deal, Elanco shares fetched $29.81, 32% above where they now trade. The decline is painful, to be sure, but more than three dozen Hoosier firms have suffered worse, a sign Elanco’s investors are keeping the faith.

“The underlying industry fundamentals remain strong, and the diversity of the global Elanco business across farm animals and pets provides durability and balance,” Simmons said in the March 24 press release.

“We are resolute in our acquisition of Bayer AG’s animal health business as it adds to our leadership position in animal health for the long term.”

Invesque’s 23-page investor presentation, filed with regulators March 17, is packed with charts and data suggesting that it, too, is a compelling long-term play.

The company owns 123 properties, from assisted-living and memory-care centers to medical office buildings. Demographic trends bode well for its senior-housing focus, with the 85-and-older population projected to grow 4.9% a year over the next 20 years.

But White acknowledges that massive COVID-19 deaths among that susceptible elderly population would throw those projections off. 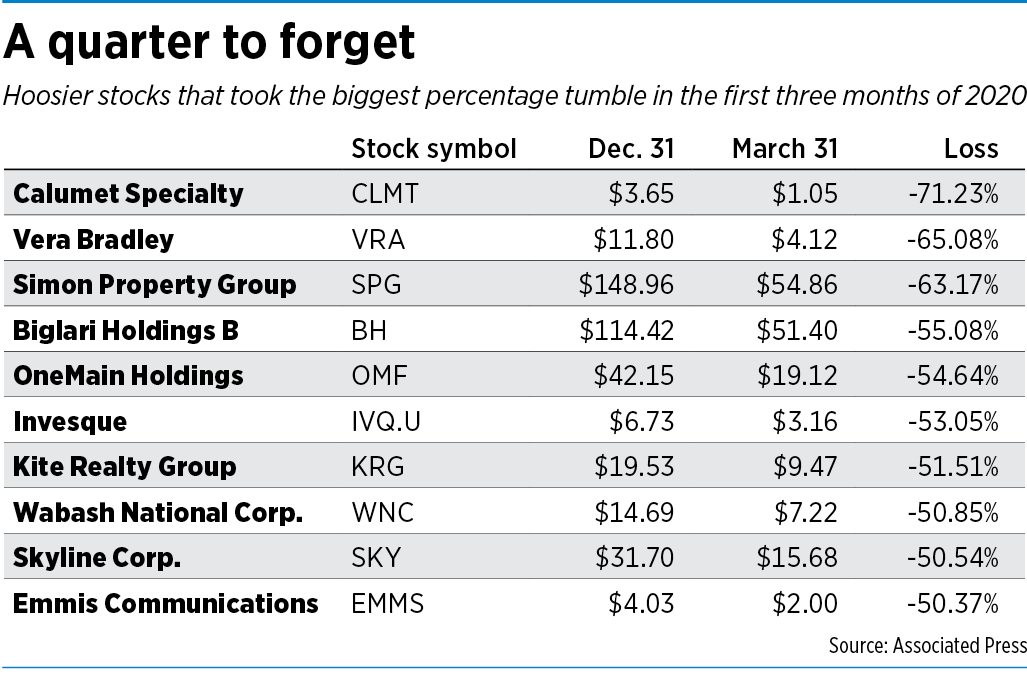 And even in the short term, coronavirus will reduce occupancies, he said, since tours for prospective residents are on hold, as are elective surgeries, which provide a flow of patients to skilled nursing facilities.

Other fallout from the virus could work in Invesque’s favor. For example, White said, the crisis will put a damper on construction of senior projects that could serve as competition for facilities owned by his company, which doesn’t do ground-up development.

But analysts tracking Invesque already had concerns to fret about before the depth of the coronavirus crisis became fully apparent. In a report issued on March 13, Canaccord Genuity analysts said they were bracing for the company to cut its 74-cents-per-share quarterly dividend.

“Material improvement in operating performance required to maintain dividend,” the headline of the report said.

Because the stock has fallen so far, Invesque’s annual dividend yield has swelled to 22%, a phenomenal opportunity—but only if the company holds firm on the dividend.

White offered no guarantee. He wouldn’t comment on Invesque’s dividend plans but said, “I do think the market is looking at all yield-oriented stocks and saying: Will they cut the dividend to preserve cash?”

Executives of Carmel-based auto auction giant KAR Global also avoided predicting how long the nation’s lockdown would last when they held a special “business update” teleconference with analysts on March 27, a week after announcing the halt of sales at the company’s physical auctions because of coronavirus concerns.

One thrust of the call was to reassure investors that KAR is on solid financial footing. Chief Financial Officer Eric Loughmiller told analysts KAR has more than $350 million in available cash and that “our capital resources are adequate for the foreseeable future.”

Another was to emphasize that KAR has steady hands at the wheel and that it is taking dramatic action to protect the business.

In particular, CEO Jim Hallett said on the call that he and the other two most-senior KAR executives are working the second quarter without pay and will do so longer “if the situation persists.” In addition, the remainder of KAR’s executive team has agreed to a 50% salary cut through the end of this quarter.

“I know that we are facing challenging times here,” Hallett said. “Our management team is experienced, and we are absolutely up to the task of getting through this.”

The reassuring words weren’t enough to propel KAR shares higher. They ticked down the day of the call, following a decline in the overall market. They’re now at $12.17, down 44% this year.

Noble Roman’s Inc. didn’t even attempt a positive spin when it said in a Securities and Exchange Commission filing on March 27 that it would need extra time to file its annual report.

The company, which for years has franchised to non-traditional locations such as convenience stores, is in the midst of a major expansion of its 3-year-old Noble Roman’s Pizza & Pub sit-down restaurant concept. It has four company-owned restaurants, three franchised locations and more in various stages of discussion.

“The current COVID-19 outbreak, including the governmental response to it, is having a significant adverse impact on our business, including reduced customer traffic and staffing challenges and could lead to supply difficulties,” Noble Roman’s said in the filing.

“The company has been addressing this by (among other things) promoting the Company’s Pizza Valet service, for carry-out, in order to replace a significant amount of the lost revenue from the dining room, but those efforts may not be successful.”

As recently as November, Noble Roman’s was striking a different chord, declaring in a press release that “the company believes it is potentially entering the most exciting expansion phase it has experienced in its 47-year history.”

Noble Roman’s shares have slipped to 30 cents apiece, down 39% for the year.•