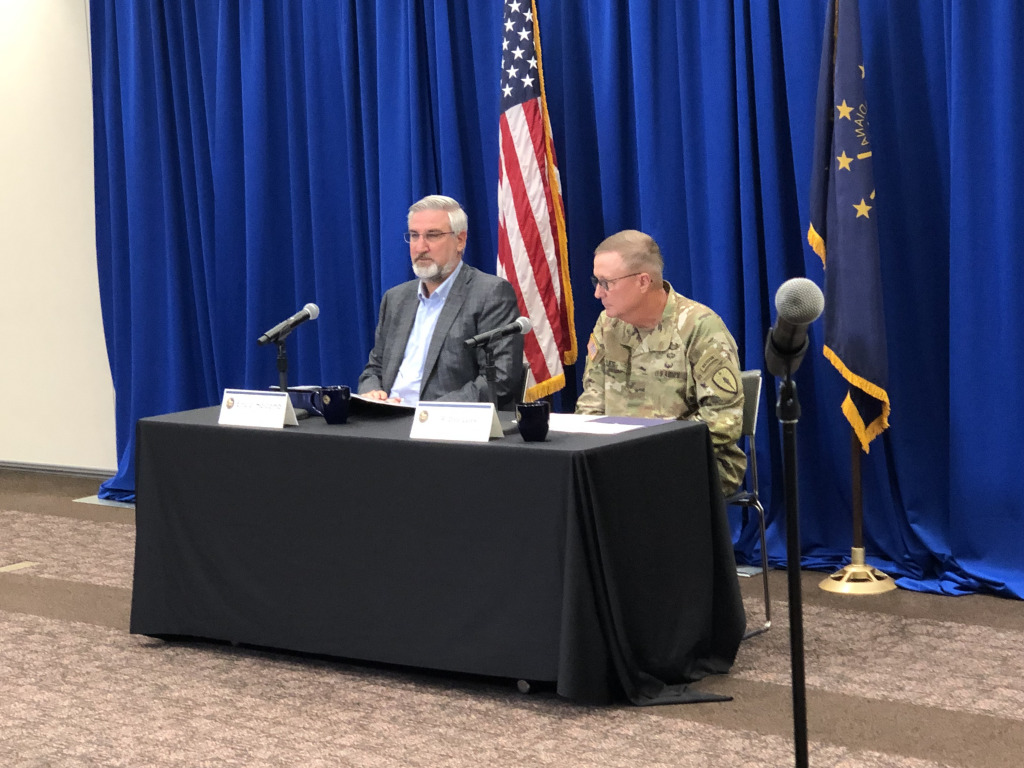 About 1,000 Afghanistan evacuees are expected to arrive as early as this week at the Indiana National Guard’s Camp Atterbury training base, where they’ll be provided temporary housing and support services before further resettlement, state officials announced Wednesday.

Camp Atterbury, about 25 miles south of Indianapolis, is expected to receive roughly 5,000 Afghan refugees in the coming weeks, said Dale Lyles, adjutant general of the Indiana National Guard. Up to 10,000 could be housed at the camp, if necessary, out of the 50,000 or so that are coming to the United States.

After the first wave of evacuees arrives, additional arrivals are anticipated in increments of 1,000.

Indiana Gov. Eric Holcomb and the Indiana National Guard on Wednesday laid out initial plans and logistics for temporarily housing the thousands of Afghan refugees at Camp Atterbury, including security measures and resettlement plans.

The refugees are expected to live on the grounds of the facility for at least 14 days to undergo medical screenings and will be placed on a medical hold status before they can be approved to leave the grounds, Lyles said.

Afghan refugees are currently either in Europe or the Middle East going through a vetting process from multiple federal agencies before boarding planes to the United States. Lyles said the vetting process is robust and will be performed at every stop the refugees make before setting foot on Camp Atterbury grounds. After landing in the U.S., refugees will go through another vetting process before being cleared to go to Atterbury or one of the eight other U.S. military facilities tapped to house them.

Once at Atterbury, they will undergo more security screenings. Local residents should not be concerned about security risks, Holcomb and Lyles said.

“We will know exactly who they are when they come to Camp Atterbury because of this thorough vetting process,” Lyles said.

The state was given a heads-up two weeks ago that Afghan refugees might be coming to Atterbury, so preparation has been happening for a while. About 800 soldiers from Texas’ Fort Hood are coming to Camp Atterbury to assist, including military police, nurses and medics. Camp Atterbury’s Garrison Command of 220 soldiers was mobilized for the mission.

Security will be heightened at Atterbury, but Lyles said the guard has no reason to believe the camp will be a target while it houses the refugees. The guard is working with local law enforcement in Johnson County and the surrounding area to address any security concerns.

All medical treatment will be done at Atterbury, where the facility has the capabilities to handle trauma care, mental health care and more. Refugees will be offered COVID-19 vaccines as well as all other vaccines that are required for visas.

The local hospitals in Johnson County will not be needed for treatment, especially as they deal with surges in COVID-19 patients, Lyles said.

A medical team from Kentucky’s Fort Knox will arrive at Camp Atterbury on Wednesday night, he added.

Whether refugees can leave Atterbury after the initial 14-day hold period will be determined by their visa status, Lyles said. The exact logistics of the resettlement process are not clear at the moment because the Indiana National Guard is focusing on getting them here first. But several state agencies—including the Indiana Department of Health, Indiana Family and Social Services Administration, the state Department of Education and more—are ready to help provide resources to those who wish to stay permanently in Indiana.

“There is a process that has to be conducted first and foremost and that is as generalized,” Holcomb said. “We want to be there on the back end of that process, to welcome these evacuees to permanent freedom. … I do believe that folks will fall in love with Indiana as much as we have. And I hope some of this talent stays close.”

13 thoughts on “First 1,000 Afghan refugees could arrive at Camp Atterbury this week”