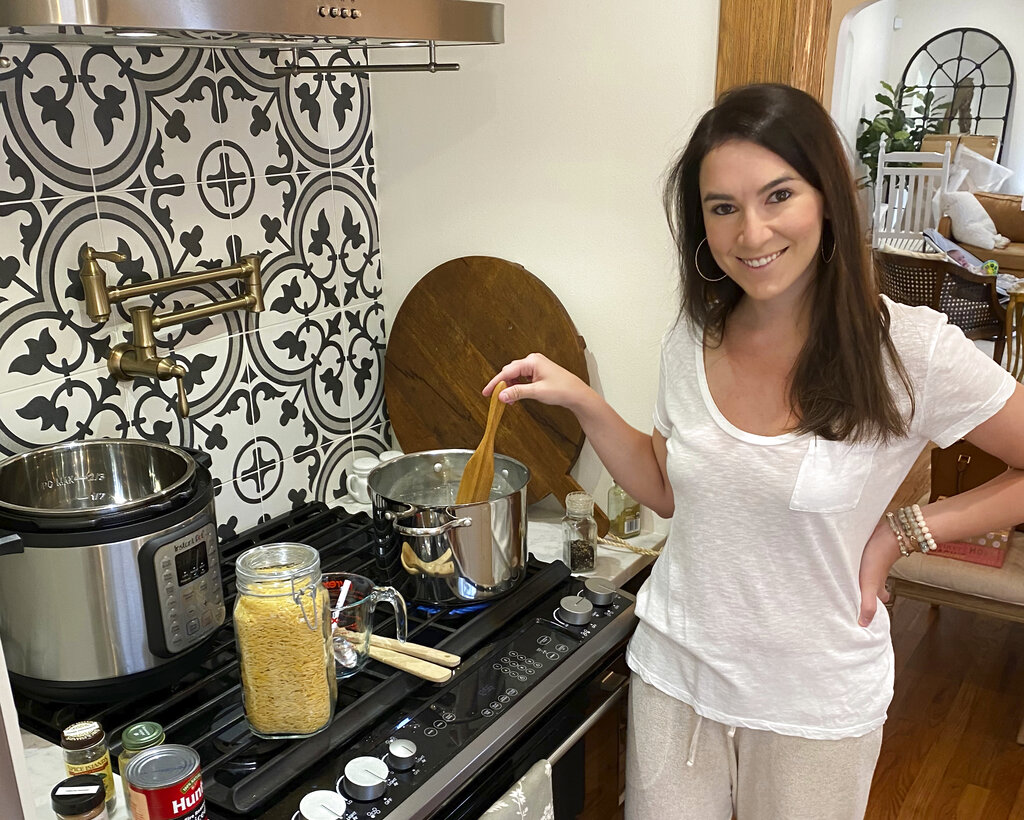 Erika Navarrete Nagle, a television producer in Denver prepares a meal for her family. Before she began quarantining in late March, the 33-year-old had never cooked chicken. "I was a mess in the kitchen,'' she says. ''I grew up in a Cuban family with a mother and sister who always cooked for me. You'd think I picked up a thing or two, but I've always been a workaholic and I never made time nor had the desire to cook." "It took a global pandemic and mandatory quarantine for me to learn," she says. (William Nagle via AP)

It’s been months since the coronavirus pandemic limited restaurant options and caused many people—even the most kitchen-phobic among us—to try to cook more.

How are people faring?

Some are experiencing cooking fatigue. Others have found they enjoy preparing and eating homemade food more than they expected. Some new habits and skills appear likely to last.

“I was a mess in the kitchen,” she says. “I grew up in a Cuban family with a mother and sister who always cooked for me. You’d think I picked up a thing or two, but I’ve always been a workaholic and I never made time nor had the desire to cook.”

“It took a global pandemic and mandatory quarantine for me to learn,” she says.

She’s feeling great about her progress: “I jumped up and down when I sautéed my first onions and garlic. I almost took to social media to brag.”

Navarette loved her mom’s Cuban chicken breast recipe, and asked for the recipe. “My mom is a typical Cuban mom cook … no measurements, just ‘a ojo,’ which means ‘eye it’. I don’t do ‘a ojo’,” she says.

After some fails, Navarrete Nagle has mastered it.

Mostly, however, she relies on cookbooks these days. “I’ve always been intimidated by cookbooks; now they are my best friends!”

John Wing, a travel agent in New York City, used to spend a lot of time in his car ferrying kids to and from activities. He was already the primary cook in his household of five people, but since March, when his driving duties abated, he’s been cooking more than ever.

Wing also has dug into a few cooking projects, like homemade bagels, learning the proper way to deep fry, and perfecting his scone game. The family has begun ordering in more now, too, and his kids have taken up baking.

“The hugest adjustment for me was surrendering my control over food shopping,” says Wing. He describes himself as “that guy who picks up and looks at almost every package of berries before picking the one,” and an intuitive shopper who likes to walk up and down every aisle of the market in lieu of using lists. Since the pandemic started, he has been ordering online, which has taken some getting used to.

Emmie Lee, who lives with her husband and two teenagers in New York City, was already an avid cook, but has used her extra time during the pandemic to stretch those muscles. Her babysitter used to make peerless Chinese dumplings, and Lee made it a mission to replicate them with her family’s help. “We can’t produce them at the incredible rate she can pleat them, but they are delicious!”

Other cooking projects have included Taiwanese beef noodle soup, Spanish tortillas and tahdig (Persian rice). Lee started her quarantine cooking by focusing on foods the family normally ordered in or ate out, trying to satisfy those cravings in her own kitchen.

She also has become a fan of preparing large pieces of meat and re-using that protein for a few meals in different ways. She re-purposes them in salads, sandwiches, or simple rice or pasta bowls.

At first, Lee made everyone sandwiches for lunch, but now breakfast and lunch have become more fend-for-yourself, do-it-on-your-own-timeline.

“That came with cooking fatigue and my realization I could not spend all day in the kitchen,” she says. “Now I’m just focused on dinner,” which the family still eats together at the table.

Lee still enjoys cooking, but has experienced “dark days where I feel uninspired … then I’m cooking for subsistence, and my heart is not vested in what I’m making.” This summer, she has been trying to organize some socially-distanced outdoor meals with friends.

Wing says his accelerated cooking pace is not likely to stick: “Once our lives are back to normal, I fully expect we will be back to ordering in as frequently as cooking at home.” He plans to return to his brick-and-mortar, in-person supermarket shopping too.

Navarette says she feels empowered by having learned to cook, and expects she’ll keep doing it. She has learned to find recipes based on what ingredients she has and what need to be cooked first, and adds, “I’m so much less intimidated by cooking and knives and cookbooks!”

“I can feed my family (more than just buttered noodles). Feels good to say,” she says.

And Lee can’t wait to return to restaurants with friends for certain foods that she’s not attempting at home, like Shanghai soup dumplings and falafel.

Katie Workman writes regularly about food for The Associated Press. She has written two cookbooks focused on family-friendly cooking, “Dinner Solved!” and “The Mom 100 Cookbook.” She blogs at TheMom100. She can be reached at Katie@themom100.com.