Home » Former Pacer Jerry Harkness, a trailblazer on and off the court, dies at 81 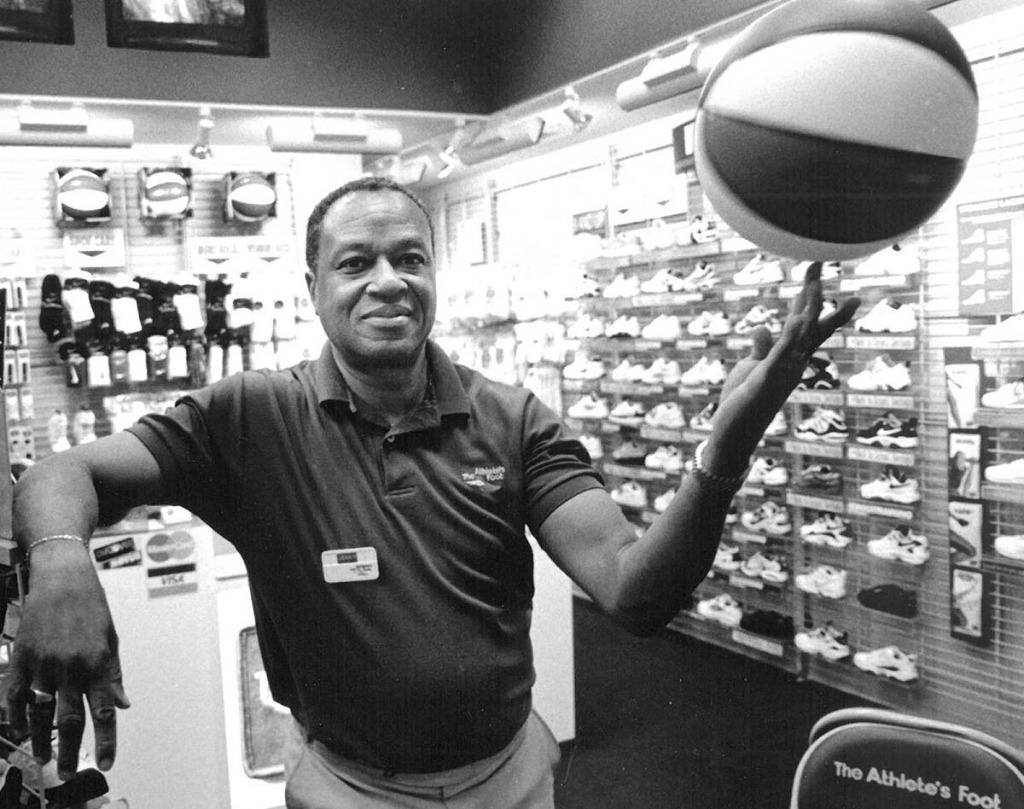 After basketball, Jerry Harkness went on to a successful career in business, fundraising, broadcasting and civic work. For example, he operated franchises for The Athlete’s Foot in Indianapolis in Anderson. (IBJ file photo)

Jerry Harkness was inspired by Jackie Robinson to take up the game of basketball. He ended up becoming a civil rights trailblazer in his own right.

Following a path paved by Major League Baseball’s first Black player, Harkness led Loyola University Chicago to a barrier-breaking national college championship in basketball in 1963 and a was pioneer well after his playing career.

Harkness, a longtime Indianapolis resident, died Tuesday morning at 81 after a long life of breaking through boundaries.

A two-time All-American at Loyola, Harkness was part of the 1963 team that won a national championship with four Black starters and played in what became known as the Game of Change.

After basketball, he went on to a successful career in business, fundraising, broadcasting and civic work, often as a pioneer in his endeavors.

Between his stint with the Knicks and his time with the Pacers, Harkness took a job with Quaker Oats in Chicago, becoming the company’s first Black salesman.

Harkness, a point guard, played two seasons with the Pacers before knee injuries forced him into retirement. The highlight of his career came on Nov. 13, 1967, when his shot of 88 feet beat the Dallas Chaparrals 119-118 as time expired. It remains the longest game-winning shot in professional basketball history.

“We are saddened to learn of the passing of Jerry Harkness, whose accolades as a gifted athlete and basketball player were outweighed only by his servant’s heart and commitment to others,” Pacers Sports & Entertainment said in a statement. “He was loved for his selflessness and service, and it was clear to all that what motivated him most was his relentless passion for growing community. Jerry was a true Hall of Famer, on and off the court, and all of us at Pacers Sports & Entertainment keep him and his family in our prayers.”

After basketball, in 1970, Harkness became the first Black fundraiser for the United Way of Greater Indianapolis. He also became Indiana’s first Black sportscaster, working at WTHR-TV (formerly WLWI) in the 1970s. He also worked mornings for Indianapolis radio station WTLC-FM.

Harkness helped found Indiana Black Expo and the Indianapolis chapter of 100 Black Men, where he served as executive director. He also operated franchises for The Athlete’s Foot in Indianapolis in Anderson.

Outside of Indianapolis, Harkness will long be remembered for his role with Loyola University Chicago in the Game of Change.

“All of us at Loyola have heavy hearts today,” Loyola coach Drew Valentine said in a statement. “Jerry was a true trailblazer not only in basketball, but in so many different walks of life, and the impact he made was immeasurable.”

State laws prohibited Mississippi State University from playing integrated teams, but the Maroons—now Bulldogs—slipped out of town under cover of darkness to play Loyola in East Lansing, Michigan, in the opening round of the Mid-East regionals. Harkness shook hands with Mississippi State captain Joe Dan Gold before the game in an iconic moment.

“Boy, the flashbulbs. I couldn’t believe,” Harkness recalled in 2018. “I just couldn’t understand. … I was shocked. I looked him in his eyes. He didn’t smile; I tried to smile at him. I could tell he was there, he was happy to play us and he was happy to be there. He had on his game face. I was shocked with the bulbs and I went back to the huddle in kind of a daze, a little.

“I thought, boy, this is more than a game. This is history.”

Loyola went to work, winning by 10. Afterward, the Maroons spoke about the basketball, not the moment.

“They were perfect gentlemen — just like any other team we played,” said Gold, the Mississippi State captain who died in 2011. “They beat us on the offensive backboards. They just had too many big men for us and they won it by taking all those rebounds.”

The Ramblers went on to beat reigning champion Cincinnati in overtime for the school’s only national championship.

The death threats, Harkness once recalled, came after Loyola opened the NCAA tourney by beating Tennessee Tech by 69 a few miles from their Chicago campus. It put the Ramblers into the matchup against Mississippi State and that led to some ugly letters from Ku Klux Klan members, calling them names and saying they had no right to play, arriving at their dorm on Sheridan Road.

Harkness got two of those letters, some were sent to other teammates. Coach George Ireland wound up taking them, dismissing the threats as junk.

“I was all right about it after we got over that,” Harkness said. “In a couple days, we were on our way to Michigan so I felt all right at that time.”

A native of the Bronx, he is a member of multiple halls of fame, including the College Basketball Hall of Fame. Harkness is survived by his wife, Sarah, and two children.

“We are deeply saddened to have lost not only one of Loyola’s all-time great players, but also one of its all-time great human beings,” Loyola athletic director Steve Watson said. “Our thoughts and prayers are with his family, former teammates and countless friends.”

“As soon as I learned the story of the 1963 Ramblers basketball team, Jerry became one of my role models,” current Loyola guard Lucas Williamson said. “He will be deeply missed and forever remembered as one of the best to wear a Loyola jersey.”

2 thoughts on “Former Pacer Jerry Harkness, a trailblazer on and off the court, dies at 81”