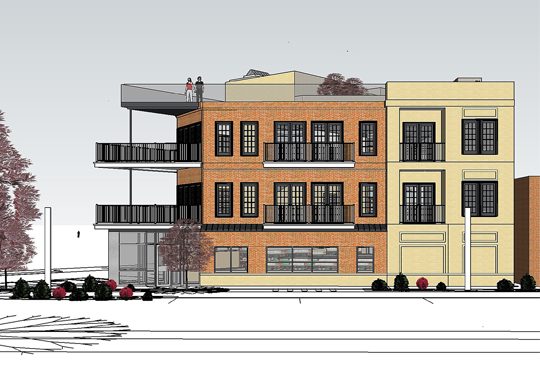 The Vandivier family's project would be located at the intersection of Virginia Avenue and Buchanan Street. (Rendering courtesy of Five2Five Design Studio LLC)

The owner of a small chain of local liquor stores plans to invest more than $2 million in a project to build a three-story mixed-use building with a private residence on the site of the chain’s Fountain Square store.

Local entrepreneur Ray Vandivier envisions a 9,500-square-foot building that would incorporate the Liquor Cabinet store at 949 Virginia Ave. The store, which currently is about 1,000 square feet, would occupy the first floor of the building, tripling in size and doubling its product inventory.

“We’re so tight in there now—it’s so packed that we don’t have enough room to bring in the items that our customers want,” Vandivier said. “If we could expand it and put in a lot more shelves and more floor space, we could carry a lot more items for our customers.”

The store currently carries about 1,000 different products. The expansion would allow for another 1,200 products, including a wider selection of beers and wines, he said.

Totaling about 7,000 square feet, the upper two levels of the building would be used as living space for Vandivier and his family—possibly with private event space on the third floor.

The bulk of the new building would be constructed south of the existing Liquor Cabinet store, on an existing parking lot that can accommodate up to nine cars. The triangular site comes to a point at the intersection of Virginia Avenue and Buchanan Street.

Vandivier said he has long wanted to live downtown, and sees the expansion as an opportunity to embrace the downtown corridor

“Fountain Square is just an outstanding area with restaurants and entertainment up and down (Virginia Avenue),” he said. “It’s a great area over there, and I’d like to be part of it.”

He said the event space would likely be reserved for his own family gatherings, but did not rule out the possibility it might also be opened up to wine tastings or other private events.

The project faces at least one hurdle. Vandivier has requested that the city of Indianapolis vacate a 140-foot strip of public land along Buchanan Street—including the existing sidewalk—to make room for six parking spots for the liquor store that would be perpendicular to the curb. In addition, Vandivier wants a public access easement over a new private sidewalk that would be constructed adjacent to the building.

The city has concerns about the parking being so close to the street’s intersection with Virginia Avenue. The justification of the request also is problematic.

“State statute requires that the plat committee find that a vacation is in the public interest. Staff would suggest that the removal of a public sidewalk in favor of perpendicular parking and a sidewalk on private property would be solely in the private interest,” staff wrote in a summary of the case for the Plat Committee.

Furthermore, “staff has concerns that this request would lead to other requests by owners of buildings with urban-style development patterns to request the removal of right-of-way adjacent to their buildings. It could be seen as way to easily gain private parking at many sites that do not currently have off-street parking without the need to buy additional real estate.”

Vandivier said he is hopeful an agreement can be reached with the city.

Jim Lingenfelter, whose firm Five2Five Design Studio LLC is the architect for the project, said a study was under way of the increase in property and sales taxes that the project could generate.

“We’ll have to see how it goes from here, but we feel with the people that we’ve got lined up in support of it that we’ve done our due diligence,” Lingenfelter said. “We don’t want to go into the Plat Committee and have it just turned down.”