Home » Gardening: What to do with all your pumpkins 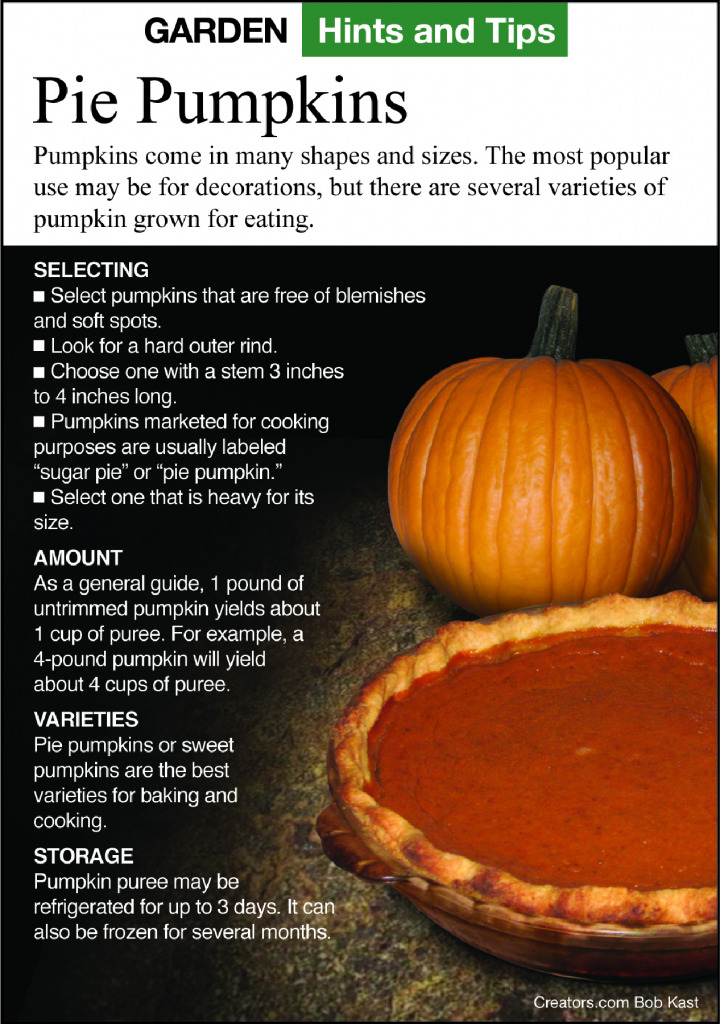 Q: Our pumpkin vines are growing very well. We have some that are already orange, but there are still small green ones starting to develop. We want some for Halloween, but we were also thinking of storing some for eating later and maybe saving the seeds for planting next spring. How do we do all this?

A: Pumpkins are a variety of winter squash like butternut or acorn squash and are a good source of vitamins. Winter squash are left on the vine until they are mature and have a hard rind, and then they are baked for eating. Summer squash are picked off the vine while still green and have a soft rind and can be eaten raw or cooked. They do not store well and are eaten fresh.

Pumpkins can be stored at low humidity at 50 to 55 degrees until next spring. For best storage, they should have a 3- or 4-inch piece of stem and should not have been exposed to a frost. They should be cured properly before storage. Cure the pumpkins at a temperature of 80 to 85 (27 to 29 degrees Celsius) and at a relative humidity of 80% to 85% for about 10 days. Curing helps to harden their skins and heal any cuts and scratches. Immature fruit that are not fully orange and don’t have a hard skin should be used quickly, as they don’t store well.

Cut the pumpkins off the vine with a pruner or knife. Leave at least a 3-inch handle, but don’t carry the pumpkins by the handle. Fruits with handles last longer in storage. Be careful to not cut or bruise the fruit, as that is an infection point for bacteria and fungi.

Store the pumpkins in a spot where they won’t touch one another. Don’t stack them. All contact points are potential problem areas for infections. Don’t store them with ripening fruit, such as apples, that release ethylene gas, which shortens the storage time. Good air circulation helps prevent mold. Throw away pumpkins as soon as you see any signs of decay.

If you want to have a decorated pumpkin but also save it for later eating, you can use tempera paint or markers to make your designs on the outside without cutting it open.

You can save the seeds for planting next year. The only problem is that they may be hybrids that won’t give you the same kind of pumpkins next year. If the package was labeled as an heirloom, you will get crops next year that match this year’s crop, provided there were no other pumpkin varieties nearby that could have cross-pollinated your plants to produce the seeds you have now.

For a real, fresh pumpkin taste in pies and pumpkin bread, don’t use canned pumpkin. Do this instead: First, peel the rind to remove it, and then boil the flesh until soft. Drain the pot, and mash the pumpkin until it is soft. It can then be frozen. It will last for months. If you use fresh pumpkin in a recipe for pumpkin bread or pie, you will taste the difference and not want to go back to the canned stuff.

Small pumpkins can be eaten as a vegetable—steamed, boiled, or battered and fried. They can also be sliced and eaten raw with dip as an appetizer.