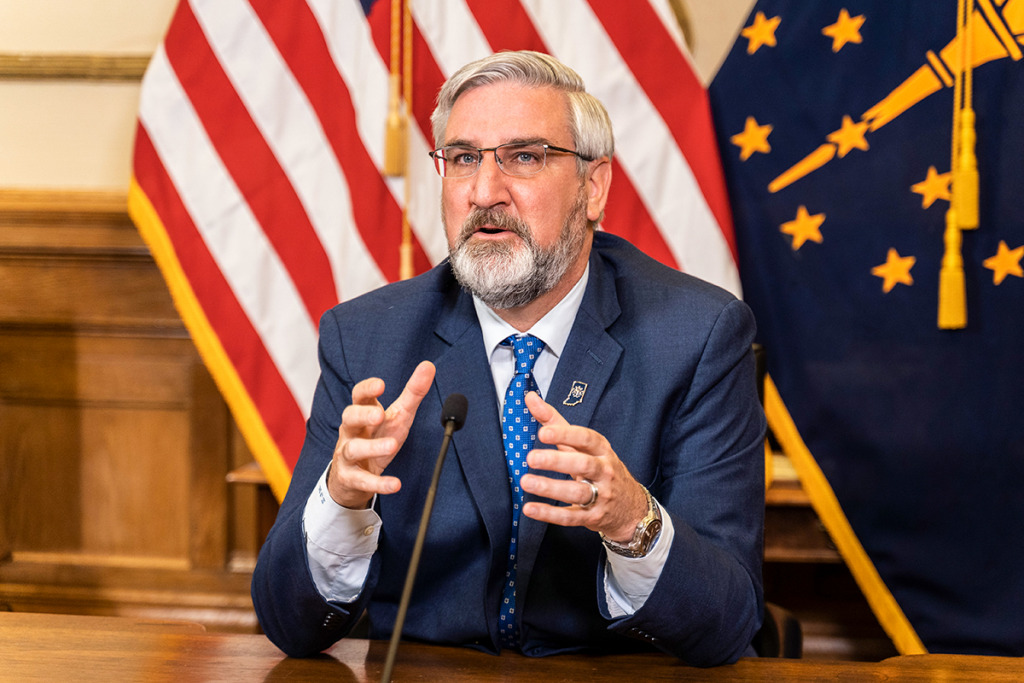 Indiana Gov. Eric Holcomb is so far declining to throw his support behind any candidates in the governor’s race, saying Monday he’s instead focused on the upcoming legislative session.

That was hours after U.S. Sen. Mike Braun and Lt. Gov. Suzanne Crouch announced their campaigns for governor. They join Fort Wayne businessman Eric Doden in the pool of announced 2024 GOP race candidates.

“Obviously, I know the lieutenant governor the best—I’ve worked with her every day. I obviously asked her to join the administration because I knew she could—I thought she could—do the job that I was seeking. And I haven’t changed my mind about that,” Holcomb said of Crouch. “But I know everyone that’s joining so far. Again, it’s early.”

Still, the Republican governor didn’t rule out an endorsement in the future.

“I’ll reserve that option,” Holcomb said. “But the best to everyone. I’m not going to be politically active, at least through the budget session. I’ll be squarely focused on my job at hand over the coming months. We’ll see later how I get involved.”

For now, Holcomb said he’s “being very focused” and “very disciplined” on the upcoming budget-setting session in the Indiana legislature.

Holcomb said he expects to announce his own legislative agenda Jan. 4, just days before the General Assembly reconvenes at the statehouse Jan. 9.

Although the governor didn’t comment on specific legislative priorities, he emphasized that the upcoming session will see passage of his last state budget.

“The priorities in it are very important, and they’re going to have a long lasting effect and impact on whoever my successor ends up being,” Holcomb said. “I want to make sure we stick the landing, and that’ll be sometime in April.”

Holcomb said, too, there is “a lot of work to be done” in Indiana regarding mental health, infant mortality rates and opportunities for immigrants.

“In my role, I will also be speaking to immigration and the federal role they have in reforms that are necessary so that states like Indiana, who are gaining population, can gain even more,” he said, adding that there’s a need to focus more on connecting immigrants and refugees with necessary integration services once they arrive in Indiana.

It also remains unclear whether Holcomb will seek a new political office after he concludes his second term as governor. When asked if he might throw his hat in the race for Braun’s senate seat, Holcomb said “we’ll see.”

“I’ve been involved in some campaigns that have been 16 months, and I thought that was early. And then I’ve been involved in some that took about 106 days, and I thought that was rushed and the best way to do it,” he said, referring to his own gubernatorial campaign in 2016. “I’m going to do the job I’ve got at the expense of (nothing else). That’s somewhat liberating. I’m very comfortable with that.”