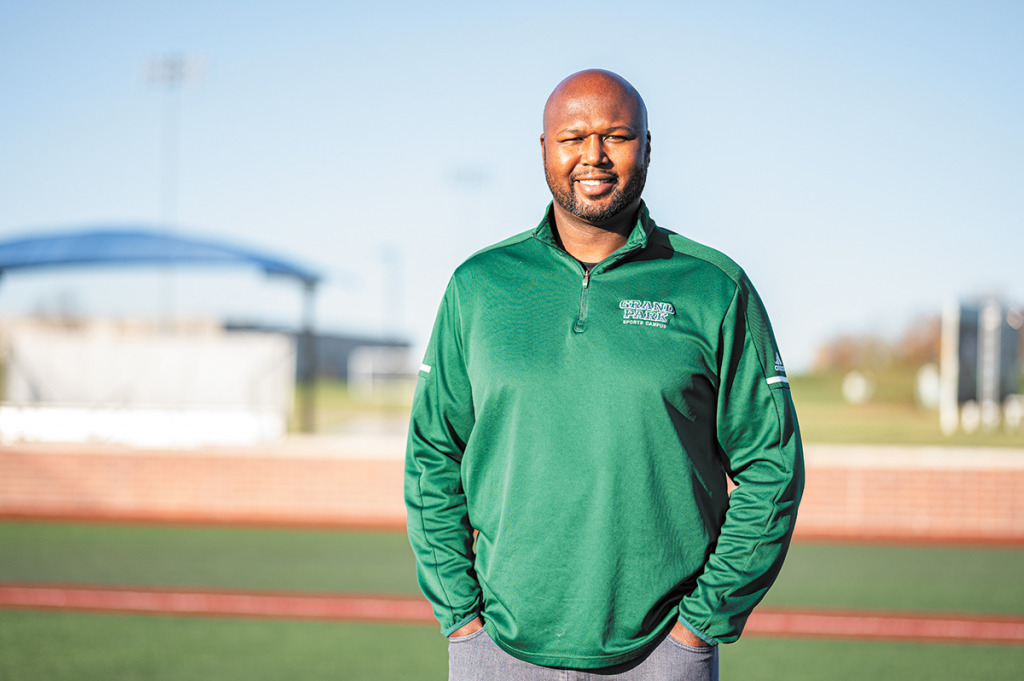 Grand Spark Sports Campus Director William Knox says that “while we’ll be down this year, we were able to really pick up some momentum once we were able to open back up.” (IBJ photo/Mickey Shuey)

William Knox has been in the sports industry for more than two decades, but nothing he’s experienced was comparable to the challenges he faced this year as director of the Grand Park Sports Campus in Westfield.

Because of the COVID-19 pandemic, the campus shut down March 16, just before Gov. Eric Holcomb imposed a statewide stay-at-home order.

After intense planning, and the adoption of a host of safety protocols to protect staff, players and their families, the campus reopened May 24.

Knox talked about the experience with IBJ reporter Kurt Christian. This is an edited version of that interview.

What were you expecting when you heard about the pandemic?

On the field sports side of our complex, that’s when a lot of our soccer events take place. And in all, we canceled over 300 activities during the time period that we were shut down and unable to conduct business. That’s a combination of tournaments, practices, scrimmages, tryouts, things of that nature. Typically, in a good year, there are 2 million visits to the campus. This year, we’re well over 600,000 visits to the campus.

So while we’ll be down this year, we were able to really pick up some momentum once we were able to open back up. And we think it was a result of some of the pent-up demand.

And I hate to say we were fortunate, because no one’s fortunate in this situation, but because of our geographic location, a lot of events that were supposed to take place in some of the hot zones could not. And we were able to bring in those events and host them at Grand Park.

What had you expected to happen once you heard there was this global public health threat?

I’ve been in the industry for quite some time, and I’ve ridden through a few recessions. When we’re looking at a downturn in the economy, we always use our time to really prepare because we knew sports would bounce back the quickest of all the tourism sectors.

I was not 100% sure that that would be the case related to this pandemic. When you’re thinking about children and health-related issues, a lot of parents I thought would be skeptical to get their kids back into activities so quickly.

But as we started to learn more about the virus and how it was contracted and how we could provide a safe atmosphere for competition, I quickly began to shift my focus to say, “Hey, I believe that once we come back and once we’re able to open these doors, we’re going to be in for a good season. So let’s start planning.”

And that’s why we did some things like partnered with the IUPUI Sports Innovation Institute and conducted a study to really understand what people needed to see in place to feel safe, to come back to venues like ours, because we knew that that was the first thing. People had to feel like they were safe. And we had to put practices into place to make sure that the campus was safe.

What physical and logistical preparations and changes to ongoing operations did you have to make to ensure everyone’s safety?

We really had to go at this from a multi-layered approach. First and foremost, we looked at it from our staff standpoint. How can we get staff back to their jobs safely?

We were very fortunate to work with the governor’s office and a few other organizations throughout the state to put together some pretty comprehensive plans as it relates to events. But from a staffing standpoint, our leadership with the city really helped us shape and guide direction related to returning staff for the workplace safely and then what needs to happen.

The second approach from our standpoint was making sure we communicated with our organizers, because those are the individuals who bring the activity to the campus.

So we had to really fine-tune our processes so that we can communicate to them what they need to do once they are in a position where they can start planning and executing onsite.

And then we obviously looked at the visitor, the most important piece of this because we wanted to make sure when individuals did choose to compete and they did identify where they were going, they knew that from the very onset that we were putting measures in place to make sure that they were safe.

So we went in and retrofitted a lot of our restroom facilities to be touchless. At the very early stages, we closed down some of the stalls so that we could maintain social distancing. Everybody kind of made a run on plexiglass to make sure there was some barriers between individuals.

We required masks. We increased our sanitation of fields. And also our restroom facilities, as opposed to being sanitized twice a day, they were sanitized each hour as opposed to just being cleaned.

What did you wind up seeing from people? Were they happy with things? Did they kick up a fuss about the masks?

Immediately once we returned to play, a lot of people were very cautious and maintained great distances. Only a handful of people, not even enough to really amount to anything, complained about the masks. But for the most part, everybody was very compliant with what we put forward as far as our recommendations.

As we continued through the season, as you can see in the country as a whole, people got comfortable. So we really had to look at it and say, “OK, we’re back to playing. We don’t want to get to a point where we could shut back down. What do we need to do to make sure we can maintain some of these policies that we put in place?”

We evaluated everything. Once we opened back up, there were still activities that just didn’t feel comfortable hosting. And we either moved those events and/or postponed them to a future date and time.

But those that were ready, they knew that we took seriously our attempts to make sure the campus was safe. And honestly, their numbers were much higher than what they had seen in previous years. That’s because there’s a lot of consolidation with other events canceling in other areas throughout the country.

What has it meant financially for Grand Park to go from 2 million visitors annually to closer to 600,000?

From an actual revenue standpoint for baseball specifically, a lot of that activity is managed through a third-party company, [Westfield-based Bullpen Tournaments] as it relates to return on that revenue and things of that nature.

The campus as a whole, obviously March through May, took a hit financially due to us having to cancel our activity, or relocate that activity to future dates.

But on the flip side of that, once we were able to reopen, we saw record numbers … and revenue for the last few months.

So will it be enough to overturn our deficit? I don’t think so, but we were very fortunate to be in a position to really ramp up in a big way in June, July and into August. And we’re trending at a much more positive winter season, as well, when we’re going indoors.•