Home » How to choose, prep and use all those summer cucumbers 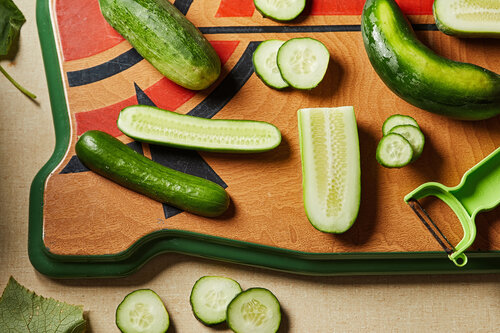 Each family has its own lore, often-repeated stories and catchphrases. One that I’ll always remember, although told to me secondhand, is from my oldest niece, who while at her great-grandparents’ farm had a simple request: “More ‘cumbers, please.”

My husband’s grandmother tends to keep a bowl of sliced cucumbers in salted water or pickle brine around, and those are what the precocious tot was requesting. We may be saying the same thing now, when markets are awash in cucumbers. This is the season when they are most appreciated as a cooling and refreshing ingredient.

Here are tips to help you pick the best cucumbers and figure out how to use them.

If you’re trying to decide which type will taste superior in your recipe, don’t overthink it. “Subtle differences among types aside, all cucumbers more or less taste alike,” says Deborah Madison in “The New Vegetarian Cooking for Everyone.”

That being said, there are other considerations—size, texture, water content—that might affect your choice. In “Ruffage,” chef and farmer Abra Berens gives the rundown.

English: This salad favorite is moist with small seeds, and a thin, tender skin. Chop or slice, and eat. Easy.

American: These are probably what you see in your mind’s eye when you envision a cucumber. They’re shorter and plumper, with a thicker, bumpy skin that’s not always pleasant to eat. Berens suggests going with a medium size. Too small and they lack flavor, too big and their thicker skin and larger seeds make them unpalatable. These tend to hold up well in the type of casual refrigerator pickles my husband’s grandmother—and Berens’s mother—have on hand.

Pickling: You’ll likely see bins of these at your farmers market. Berens notes that their size and drier flesh make them ideal, for, yes, pickling. Less water in the flesh means the brine won’t be diluted by it and also wards off the potential for rot.

Persian: Hands down, these are my favorite, the ones that earned the moniker “crunchy cucumbers” from my son. You, however, may also see them at your market under the name Manar. They’re on the smaller side, with bumpy ridged skin that is just fine to eat. Berens says these are good for preserving, too.

Lemon: They are round and yellow like the citrus they’re named after. “They have a moderately tough-textured skin with a slight tang in the bite,” Berens says. “You can use them anywhere you’d use another cucumber.”

Berens says that cucumbers you’re buying should have rigid skin with no wrinkles, which can indicate age or that the cells of the fruit are broken. They should be a healthy green, not yellow, although you may see pale spots where the cucumber was not exposed to the sun. Keep them in a cool, dark spot; the refrigerator, inside a plastic bag, is the best place for the longest storage. If you buy cucumbers that have already been chilled, keep them that way, as the cells can be ruptured by temperature changes.

Madison’s general rule is that you don’t need to peel cucumbers with thin, unwaxed and unsprayed skins. If you want some, but not all, of the skin for texture or visual appeal, try peeling strips for a striped effect, which is especially appealing on slices.

Older cucumbers and certain varieties will have bigger seeds, but removing them is a matter of personal preference. In “Salt Fat Acid Heat,” Samin Nosrat recommends getting rid of any larger than a peppercorn. My preferred method is to halve the cucumber lengthwise and then use a small spoon, teaspoon or melon baller to scrape them out.

Salting cucumbers, Madison says, can help draw out excess moisture for a crisper result. Berens is a little more cautious, noting that salting too far in advance can make dishes watery or the cucumbers rubbery. If you do salt, drain the water and blot the pieces.

One I’d never heard: Madison recommends rubbing the cut sides of cucumbers together until they foam to counteract bitterness and elicit a sweeter flavor. Again, here’s Berens: “I haven’t found this to make a bit of difference, but it is kind of fun and worth a shot if you taste bitterness in cucumbers.”

How to use them

There’s not much reason to do anything to cucumbers other than eat them as is. Snack on them. Toss them in a salad. Then experiment with them in a non-green salad, a drink or a soup.

For cooking, Berens recommends charring them, crediting her friend, food blogger Tim Mazurek, for introducing her to the concept. First, you need to blot the cucumbers as dry as you can. Leave them in bigger pieces with the skin intact so they don’t fall apart. Sear in a very hot pan, aiming for a very dark crust and a somewhat soft texture to the flesh.

Another approach: Smashing. Sure, it’s therapeutic, but it also results in a mix of softer and snappy textures and chunks that are attractively ragged. You can take a completely different approach and thinly slice them into delicate ribbons.

As far as flavors, cucumber naturally pairs well with dairy, as in raita or tzatziki (Indian and Greek yogurt dips, respectively), doogh (a Persian yogurt drink you can find variations on elsewhere) and soup. Its natural cooling tendency makes cucumber a handy foil to spice as well.

Becky Krystal writes about food for The Washington Post.