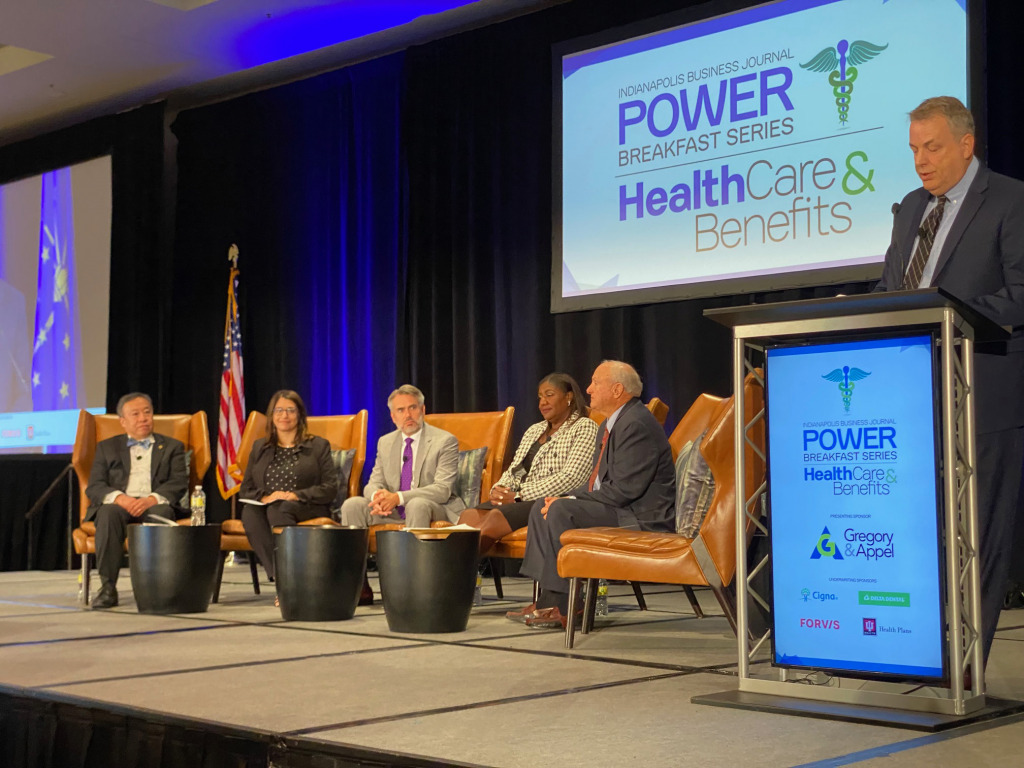 Indiana needs to rally around a plan to increase spending significantly on public health to help curtail the effects of obesity, smoking, infant mortality and other critical measures where the state ranks low, a panel of health and business leaders said Friday morning.

A blue-ribbon commission appointed by Gov. Eric Holcomb is recommending that the state spend an additional $242 million a year to help local health departments and school districts make their communities healthier.

Some say the extra investment could have a huge effect not only on health, but economic development and community prosperity.

“We are losing our working-age population at an alarming rate,” Brian Tabor, president of the Indiana Hospital Association, said during at panel discussion at IBJ’s Health Care & Benefits panel discussion. “Our life expectancy in Indiana over the last couple of years has dropped two years behind the national average.”

He said substance abuse, suicide and early deaths from unhealthy environments are taking a toll and could affect the ability of Indiana to attract investments due to a growing worker shortage in some poor rural counties where the life expectancy is notably shorter than wealthier counties.

Some medical professionals say resources are stretched to the breaking point in some communities.

About one-third of Indiana’s 92 counties are designated “maternal health deserts,” which means that women have to travel an hour or more to get obstetrical care, said Dr. Camueal Wright, an obstetrician-gynecologist and Indiana chief medical officer for CareSource, a managed-care Medicaid organization.

“So I think there would be a huge benefit to improving public health, starting with the basics and working from there,” she said.

The large price tag, she said, could be more than made up with healthier communities, where people miss less work and are more engaged in civic affairs, which are drivers for productivity and economic development.

One of the top recommendations of the public health commission is to help local health departments, which are often understaffed and have limited resources for school nurses, ambulance service, providing immunizations and collecting health information.

Indiana spends about $55 a person on public health annually, or about $374 million. The money is used for such things as preventing, detecting and tracking disease outbreaks, as well as tobacco cessation programs, emergency preparedness and infant health programs.

That per-person spending ties Indiana with Arizona and Ohio for second-to-last place among U.S. states, according to America’s Health Rankings 2019 report by the United Health Foundation. Only Nevada spends less.

The commission is recommending that the state increase annual public health funding to $91 per person, an increase of about 65%, for an extra $242.6 million a year.

Much of that money would be funneled to local health departments, many of which have bare-bones offices and programs, according to the commission’s report, released last month.

Dr. Roberto Darroca, an obstetrician-gynecologist in Muncie and past president of the Indiana State Medical Association, said physicians recognize the need for increased spending on public health, as many are county health officers around the state.

Gloria Sachdev, president and CEO of the Employers’ Forum of Indiana, which pushes for more transparency and value in health care, said many business leaders in her group understand the need for higher spending and support at the commission’s recommendation.

Luke Kenley, a  retired Republican state senator from Noblesville who co-chairs the commission, said many parts of Indiana can’t support public health efforts in their communities without more state money. He said more than two-thirds of Indiana counties have a population of 50,000 or less.

“They do not have an asset or wealth base that makes it easy to fund up the local public health department,” Kenley said. “Other priorities like roads and jails and law enforcement are clearly going to come ahead of that. So the state needs to pick up the mantle and do its share.”