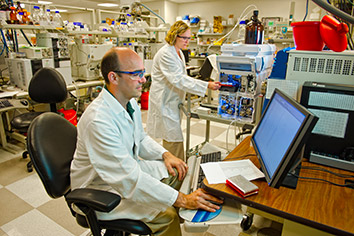 Eli Lilly and Co. is asking federal regulators to approve a new COVID-19 antibody for emergency use, which the company says works against omicron and all other known variants of the virus.

The Indianapolis-based drugmaker said Thursday that the new antibody, called bebtelovimab, is designed for mild-to-moderate cases of COVID-19 in patients who are at high risk of progression to severe illness, including hospitalization or death.

It’s the third antibody that Lilly has developed for treatment of COVID-19. In December, the U.S. government paused distribution of Lilly’s two previous antibodies, saying they did not appear effective against the omicron variant. Those antibodies, bamlanivimab and etesevimab, were administered together in a cocktail.

Unlike vaccines, the antibodies do not prevent a person from getting infected with the virus, but are designed to neutralize the disease if given after a person is infected. The antibodies are administered through infusions.

Lilly rang up $2.24 billion in sales of bamlanivimab and etesevimab last year, representing about 8% of its total revenue, according to full-year and fourth-quarter results released Thursday morning.

In addition, Lilly said it has submitted a request to the FDA for standard approval of an existing arthritis drug, baricitinib, sold under the brand name Olumiant, to use in hospitalized COVID-19 patients. The drug currently has an emergency use authorization.

On an adjusted basis, Lilly reported a quarterly profit of $2.49 per share, compared with estimates of $2.46 per share. The company also reaffirmed its full-year adjusted earnings outlook between $8.50 and $8.65 per share.

The big sellers in the fourth quarter were diabetes drugs Jardiance (up 38%) and Trulicity (up 25%), along with autoimmune medicine Taltz (up 31%) and COVID-19 antibodies (up 22%).

The company said it had recently seen positive trial results on five experimental drugs that it hopes to launch within the next two years.

“Lilly had a remarkable year of growth and pipeline success in 2021, despite the continued hardships from the pandemic,” Lilly CEO David Ricks said in written remarks.