It wasn’t that long ago that Luke Kenley retired from the Statehouse as one of the most powerful and influential lawmakers in the Indiana General Assembly.

As chair of the Senate Appropriations Committee from 2009 to 2017, the Noblesville senator held tight control over the state’s purse strings and wasn’t afraid to ruffle the feathers of his Republican colleagues if it meant keeping a balanced budget. Known for being tough but fair, Kenley was once described as a “master chess player” in budget negotiations and wasn’t afraid to grill special-interest groups and lobbyists in public hearings.

But today—five years after leaving the Statehouse—he has an entirely new role in such negotiations.

He was handed the job in August 2021 by Gov. Eric Holcomb, who made Kenley co-chair of the Governor’s Public Health Commission. The other co-chair is Dr. Judith Monroe, former state health commissioner and current president of the Atlanta-based CDC Foundation, which supports the public health mission of the U.S. Centers for Disease Control and Prevention.

Since the commission issued its findings this August, Kenley has been traveling across the state, privately meeting with lawmakers, lobbyists, business leaders, school administrators, health care providers and local officials to deliver the message that Indiana’s public health system is failing Hoosiers and is woefully underfunded. He’s made nearly 40 presentations.

“It’s been a public education campaign ever since we started the commission,” Kenley said.

When lawmakers return to the Statehouse in January to craft a two-year budget, Kenley will testify before the committee he once held sway over to ask his former colleagues to allocate an additional quarter-of-a-billion dollars annually toward public health programs to bring Indiana in line with the national average for public health spending per capita.

It will be a test of how much influence Kenley still holds. Republican leaders are generally open to more funding for public health, but key lawmakers already have expressed reluctance at the proposed price tag amid fears of a recession and have suggested a more gradual increase.

Before serving on the 15-member panel, Kenley said, he wasn’t fully aware of the extent of the state’s public health crisis—but the commission’s work opened his eyes to the gravity of the situation.

“I was somewhat shocked that we were so far at the bottom end of the scale in terms of having a healthy population,” Kenley told IBJ. “When you see how little money was put into it, that appears to be a direct correlation.”

Less well known to the general public is just how little money Indiana devotes to public health spending compared with other states. A 2021 report ranked Indiana 48th for public health funding, spending about $55 per Hoosier, or a total of $374 million per year. That’s $36 less per capita than the national average of $91.

Based on those numbers, the public health commission in August recommended more than $240 million in additional annual funding—a 65% increase—to improve the state’s public health outcomes. 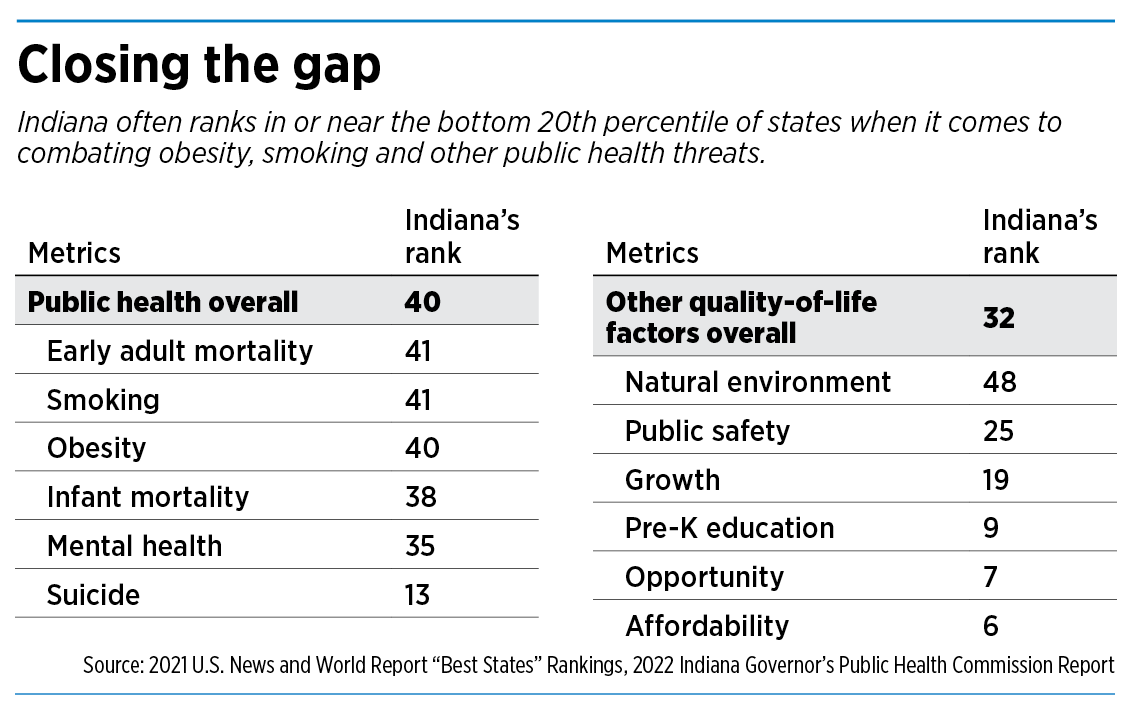 Kenley told IBJ that public health “never was really raised up by anybody as a particular issue” during his time as Appropriations Committee chair, but two Democratic senators who served during that time recalled efforts by their colleagues to boost public health spending.

Sen. David Niezgodski, a Democrat from South Bend, cited Senate Bill 62, a 2017 bill that would have created a substance-abuse-prevention pilot program in Indiana schools, and Senate Bill 277, which would have provided funds to businesses to offer fresh or unprocessed foods to underserved areas.

“It would be inaccurate to say that these things were never brought up,” Niezgodski said.

Sen. Timothy Lanane, D-Anderson, who recently retired after serving in the Senate since 1997, said bills introduced by his party often went unheard.

In 2015, Sen. Karen Tallian authored legislation that would have implemented a state health care exchange as part of the federal Affordable Care Act. The bill was referred to the Senate Appropriations Committee but never got a hearing.

“The majority party has known for a long time that our population suffers from not being healthy,” Lanane said. “I’m glad we’re doing something now, but it should’ve been done a long time ago.”

Some progress was made under Kenley’s tenure. A bipartisan bill in the 2014 session established the state’s first pilot program to provide telehealth services to patients in Indiana, and lawmakers in 2015 passed a bill that authorized local health departments and not-for-profits to allow syringe exchange programs, added hepatitis A to the list of schoolchildren immunizations and required immunization materials to be distributed to students’ parents and guardians.

But despite a few fixes around the edges, Indiana’s public health system continues to be “chronically underfunded and undervalued,” according to a December 2020 report from the Indiana University Richard M. Fairbanks School of Public Health at IUPUI and Fort Wayne.

Indiana’s life expectancy is also declining, down from 77.5 years in 2010 to 77 years in 2019, nearly two years below the national average of 78.8 years—placing Indiana 40th nationally.

While the commission’s legislative proposal hasn’t been made public, the funding model would allow counties to “opt in” to a five-year public health program, with the state covering 80% of the costs and counties picking up the remaining 20%, Kenley said. County commissioners would take an up-or-down vote as to whether they want to participate in the public health program, which would initially be a five-year commitment.

“What we’re trying to do is create a true partnership arrangement,” Kenley said.

Making the program optional avoids the appearance that the state is dictating health policy for local governments, which became a dicey issue during the pandemic as local officials butted heads with the state over stay-at-home policies and public vaccination campaigns.

Sen. Ed Charbonneau, a Republican from northwestern Indiana and chair of the Senate Health & Provider Services Committee, has agreed to be the bill’s lead sponsor in the Senate.

“One of the things we have to be very clear about is that this is not a mandate of any kind,” he said. “This is going to be an option for each county.”

“Not everybody has real warm and fuzzy feelings about their health department,” he added.

Republican Sen. Jean Leising, a former registered nurse who also serves on the health committee, has agreed to co-sponsor the legislation and said she shares her colleagues’ concerns.

“We can’t be too heavy-handed with this, or it’s going to fall flat,” Leising said.

The public health picture is not the same across all 92 counties. Because county health departments rely heavily on property tax revenue for funding, there is a direct correlation between a county’s population and its health outcomes, with smaller, rural counties faring more poorly.

The life expectancy in Hamilton County (81.8 years) is almost nine years higher than in Scott County (72.9 years), which has the state’s lowest life expectancy, according to a 2022 study by the Indiana Business Research Center at Indiana University’s Kelley School of Business.

“When you look at a lot of those counties that have the lower life expectancy, it is more our rural counties,” said Dr. Kristina Box, Indiana state health commissioner.

That’s why one of the public health commission’s recommendations was to establish a baseline set of standards for all local health departments to ensure that smaller counties weren’t underfunded, Box said.

The bill appears to have at least tepid support from Republican Party leaders in both chambers.

“I don’t see us spending $480 million in this next budget on public health,” Bray said at the Indiana Chamber’s annual legislative preview luncheon on Monday. “I’m not even sure if we sent that kind of money to local health departments that they would be able to handle it well.”

House Speaker Todd Huston, R-Fishers, said he couldn’t say whether that number was too high a price tag.

Rep. Jeff Thompson, who chairs the House Ways and Means Committee, said he agrees there are opportunities to improve Hoosiers’ health and he expects the bill to be debated in the upcoming budget session.

Several lawmakers said they expect Holcomb to include additional funding for public health in his budget request, though his office declined to confirm whether he would recommend the full $240 million in additional annual funding as outlined in his commission’s report.

“The governor will release his budgetary requests during his agenda rollout at a later date yet to be determined, but prior to the start of session,” a spokesperson said.

During Kenley’s eight-year tenure as appropriations committee chair, the state’s surplus grew to more than $2 billion, earning Indiana the highest credit rating possible. He led efforts to cap property taxes, eliminated the inheritance tax and brought Indiana’s corporate tax rate down to one of the lowest in the country.

But while the state has been good at stashing money away, the economic impact of its poor health outcomes amounts to more than $75 billion in health care costs and lost productivity due to heart disease, cancer, stroke, diabetes, kidney failure and other chronic diseases, according to a 2018 study by the Milken Institute, a California-based economic think tank.

The state’s surplus now stands at $6.1 billion. But with some economists fearing an imminent economic recession, Republicans might be reluctant to spend down too much of those reserves in the 2023 session.

Kenley, though, said investing in the state’s public health system will result in dividends for all Hoosiers. “If you spend that money upfront, it saves you lots of money later on.”•