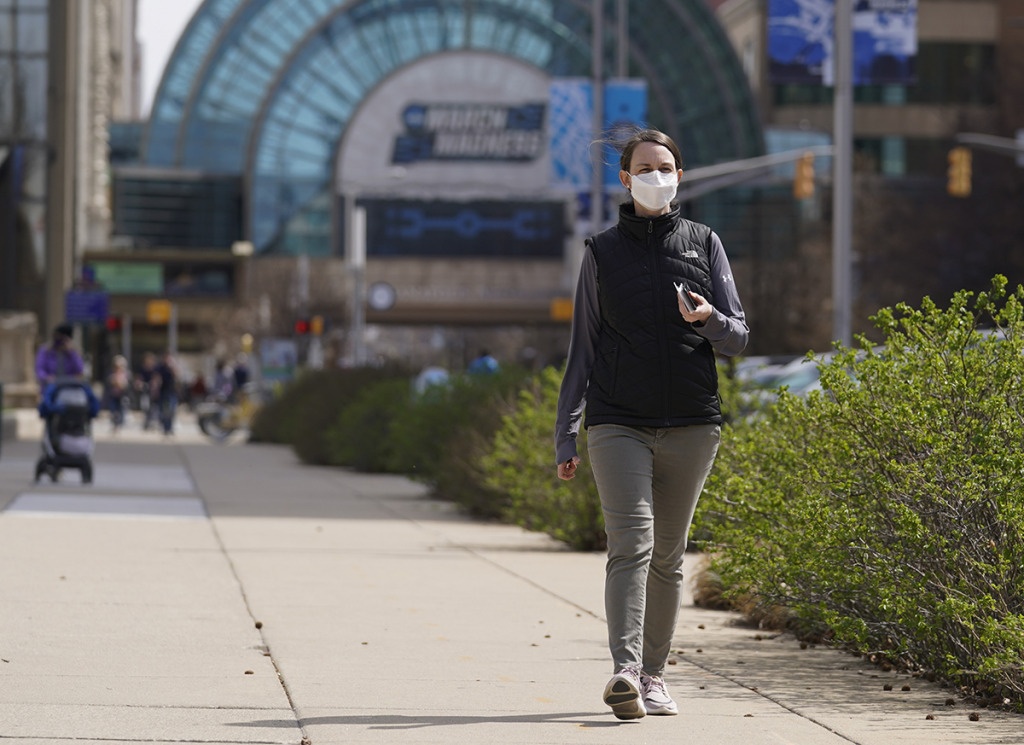 Mikela Earley walks to a hotel for an order for a customer who is inside of the bubble while in town for the NCAA men's college basketball tournament, Tuesday, March 30, 2021, in Indianapolis. (AP Photo/Darron Cummings)

The order popped onto the screen, a request for a 16-gigabyte USB flash drive from someone inside the NCAA Tournament bubble.

Time for Brad Bowman and his crew to get to work.

“All right, Runner Seven, you are up,” Bowman said, sending Mikela Earley out on foot downtown to acquire and deliver the item.

Teams in the men’s tournament in Indianapolis and the women’s tournament in San Antonio are largely sequestered in their hotels due to COVID-19 protocols. The NCAA’s “controlled environment” has been an extended stay now reaching three weeks for teams still in this weekend’s Final Four games. Players have tried to stay creative, though the places they can go are fairly limited.

The NCAA and local organizing groups set up expanded ambassador and item-delivery services relying on volunteer help to take care of needs for players, officials and others working inside.

Consider it March Madness-style concierge service, down to acquiring cellphone cords, dress pants and even an ukulele on the men’s side. It has been not merely a convenience but an essential part of keeping the tournaments moving after last year’s cancellations.

“The impression we want to leave with these teams and the folks inside the controlled environments is one of, ‘Hey, Indy took care of us,'” said Bowman, the senior vice president and chief financial officer of Indiana Sports Corp.

The same is true in Texas, where the volunteers have stepped up.

“Most of them have full-time jobs and they’re literally dropping everything and working around their schedules to help out the teams,” said Carolyn Wheat, public relations manager for San Antonio Sports. “I just love that people answered the call … to make this the best possible experience for the teams while they’re in San Antonio.”

It’s not uncommon for the NCAA to work with local groups to set up services that assist teams deeper into the tournament. What was different was this year’s expanded scope after deciding to hold the tournaments in centralized locations to minimize the risk of a COVID-19 outbreak.

For the 64-team women’s tournament, that led to volunteers working as virtual hosts while making food and supply runs, though they could only leave those items at hotel drop-off stations for the team to retrieve with no in-person contact.

Letty Gonzalez helped No. 1 seed North Carolina State during its Sweet 16 run. A vice president at a local credit union, Gonzalez focused on making meal runs quickly enough to ensure food was delivered hot or answering a Friday night call for toiletries after she had settled in for the night.

“I feel for these players that didn’t get to have this last year, where everything came to an abrupt stop,” Gonzalez said. “They deserve this. … It still kind of sucks that we’re in this pandemic and they have to do everything virtually and they have to stay in this bubble. But I think if we can have some kind of input or say with making it more fun for the girls and more enjoyable, I think it’s very rewarding.”

For the 68-team men’s tournament, there was an added layer of ambassadors working inside directly with teams. They are tested daily and have been sequestered throughout the tournament, so they don’t get out much, either.

Not that they seem to mind.

“My initial thought was: I’m about to be a part of history,” said ambassador Reanna Reyes, a 23-year-old recent Purdue graduate from Dyer, Indiana. “The NCAA has done an amazing job in making sure this has all come to life. … I feel lucky to be a part of it.”

Their duties can be a bit of a catch-all, everything from helping a player locked out of his room to setting up to-go meals for players returning from late games.

“I look at myself as part of it … like that I contribute to their wins and losses,” said 23-year-old Ceasar Adim, a recent Massachusetts graduate working as an ambassador through the McLendon Minority Leadership Initiative for increasing opportunities for minorities in college sports.

On the outside, Bowman’s group has learned to be flexible.

Some orders, taken from 7 a.m. to midnight, require stops at more than one place. Others are bigger than expected, such as the order for 10 balloon bouquets that required a second runner to pick them up with a van. Still others are curious combinations, such as the one for men’s underwear and Ranch dressing.

Earley, the Indiana Sports Corp’s events director, has pitched in some of the delivery runs.
On this day, her route took her to a FedEx store to purchase the requested memory stick, though it took a bit of time before realizing it was behind the counter. Then she walked to the J.W. Marriott – adorned with a giant tournament bracket on its blue 33-story exterior – to place it on a drop-off table just inside the hotel’s sliding glass door.

She took a cellphone photo as proof of delivery, then walked back outside.

And with that, Earley headed back to the hub to wait for the next request.