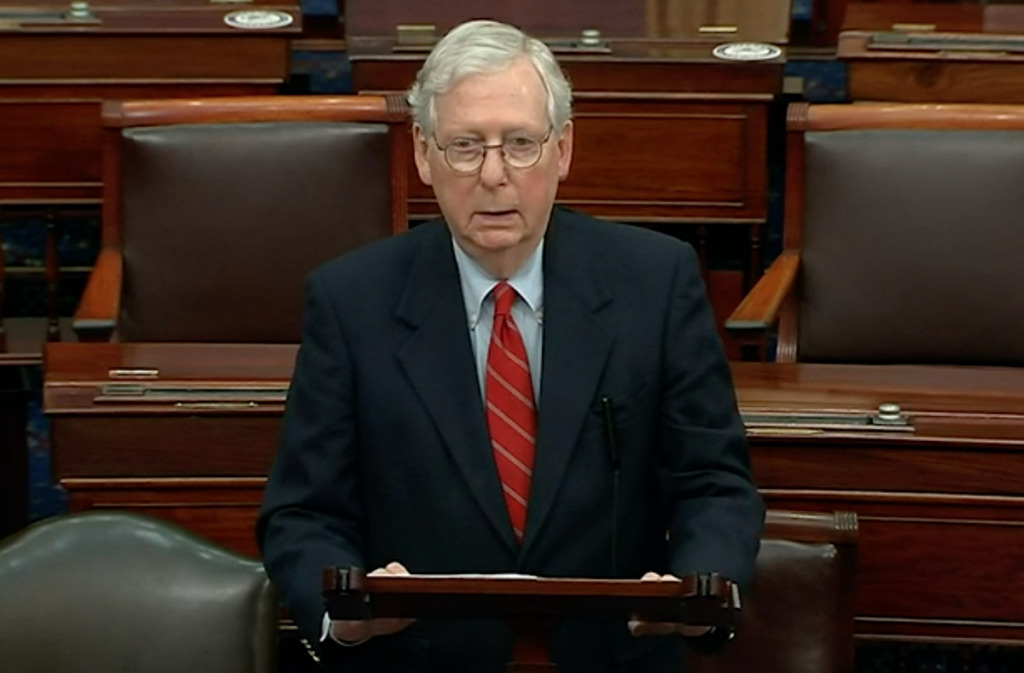 Senate leadership announced a bipartisan deal on an approximately $900 billion economic relief package late Sunday afternoon that would deliver emergency aid to a faltering economy and a nation besieged by surging coronavirus cases.

After months of contentious negotiations and seemingly intractable partisan gridlock, Senate Majority Leader Mitch McConnell, R-Ky., and Senate Minority Leader Chuck Schumer, D-N.Y. took to the Senate floor to say a deal had been finalized and could be approved quickly.

The emerging stimulus package was expected to direct hundreds of billions of dollars in aid to jobless Americans, ailing businesses and other critical economic needs that have grown as the pandemic ravages the country and batters the economy.

“More help is on the way,” McConnell said. “Moments ago, in consultation with our committees, the four leaders of the Senate and House finalized an agreement. It would be another major rescue package for the American people. As our citizens continue battling this coronavirus pandemic this holiday season, they will not be fighting alone.”

Schumer then took to the floor, calling the aid package insufficient but heralding it as a critical measure to “give the new president a boost, a head start, as he prepared to right our ailing economy.”

The House and the Senate on Sunday night approved a one-day extension of government funding to allow the final bill text on the relief package to be written. The stopgap measure must still be signed by President Donald Trump to prevent a government shutdown after midnight.

The legislation includes stimulus checks for millions of Americans of up to $600 per person. The size of that benefit would be reduced for people who earned more than $75,000 in 2019 and disappear altogether for those who earned more than $99,000. The stimulus checks would provide $600 per adult and child, meaning a family of four would receive $2,400 up to a certain income.

Congress would also extend federal unemployment benefits of up to $300 per week, which could start as early as Dec. 27.

The income criteria for the stimulus checks is expected to reflect that of the first round of relief payments sent by the Treasury Department this year.

Adult dependents are not expected to qualify for the stimulus payments, people familiar with the negotiations said, despite a push from congressional Democrats. The deal would include stimulus payments for families in which one of the parents is not a citizen, but not for undocumented immigrants themselves.

The deal to extend federal jobless benefits for millions of unemployed Americans at a level of $300 per week would cover up to 11 weeks of unemployment through March 14, aides familiar with the negotiations said. An unemployment benefits program for contract and gig workers, which is also set to expire at the end of the year, would be extended over the same period for those workers.

Negotiators also agreed to extend the deadline for states and cities to use unspent money approved for them by the Cares Act, two people familiar with internal deliberations said. States and cities have until the end of the year to spend billions of dollars before it expires and has to be returned to the federal government. The deal would instead extend that deadline for a full year.

Republicans have successfully opposed Democrats in their demands for hundreds of billions of dollars in state and local aid. Many local governments are experiencing steep declines in tax revenue and have been warning of layoffs. Extending the deadline for using leftover local government funding from the Cares Act allows Democratic lawmakers to say they still provided some relief to ailing municipalities.

The bill would also extend for one month a moratorium on evictions that is set to expire at the end of the year, two people with knowledge of the matter said. The moratorium would be extended through January, at which point Democrats believe the incoming Biden administration can extend it again if necessary. The legislation would provide about $25 billion in emergency assistance to renters, the people said, though it remained unclear how that money would be disbursed.

The bill also includes a tax break for corporate meal expenses lobbied for by the White House and denounced by congressional Democrats, according to two people with knowledge of the matter. Trump has for months talked about securing the deduction – derisively referred to as the “three-martini lunch” by critics – as a way to revive the restaurant industry battered by the pandemic. Critics say the measure, led by Sen. Tim Scott, R-S.C., will do little to help ailing restaurants but will reduce firms’ tax obligations.

Lawmakers had also appeared to resolve a dispute over whether businesses that received PPP loans, and would have them forgiven, and would allowed deductions of the costs covered by those loans on their federal tax returns. Those costs would be deductible under a final agreement so long as a PPP recipient could show a loss in revenue in 2020 compared with prior years, according to a lawmaker briefed on the deal.

It may take more time for congressional staff members to draft those agreements into legislative text and prepare the massive bill for votes in the House and Senate. Lawmakers had not released text of the agreement between senior Democrats and Sen. Pat Toomey, R-Pa., over the central bank, which was a sticking point Saturday.

Toomey initially demanded that a stimulus package prohibit the expiring lending programs, or anything “similar” to them, from being re-created in the future. He ultimately agreed to Schumer’s compromise, which steered away from barring programs “similar” to the ones that expire this year and instead applies more narrowly to the same programs.

The spending bill also includes a measure protecting patients from “surprise” medical bills. These bills – which can total tens of thousands or even hundreds of thousands of dollars – can result when a patient through no fault of their own gets care from a doctor or hospital outside their health plan’s network, often surrounding emergency care.

Under the provision, doctors and hospitals may no longer charge patients the extra out-of-network costs not covered by their insurance plan. Instead, a third-party arbiter would decide the payment for these bills.

The agreement already skewed toward the demands of doctors over insurers, and lawmakers added another provision further conceding to their requests. The measure would explicitly ban the arbiter from considering rates paid by Medicare and Medicaid, which are considerably lower than what private insurance typically pays.