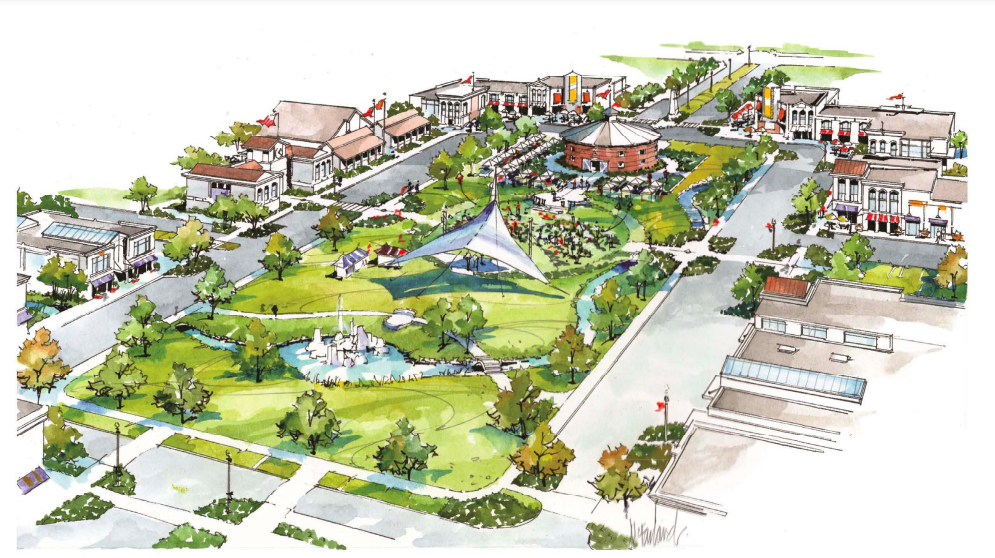 The creation of a downtown McCordsville could start with a pair of buildings featuring hundreds of apartments and neighborhood and several thousand square feet of retail, restaurant and office space.

Fishers-based Rebar Development received early approval with a 3-1 vote from the McCordsville Town Council this week to execute the $40 million first phase of McCord Square, a 48-acre area within the overall master-planned downtown project at the southeast corner of Broadway and Mt. Comfort Road.

Rebar’s McCord Square Apartments will include two 111,000-square-foot mixed-use buildings standing four stories tall, with a total of 206 one- and two-bedroom apartments and 6,000 square feet of commercial space.

Construction is expected to begin in February 2022 so that the project might be completed by summer 2023.

The $31 million apartment project will be built on either side of a planned new Civic Green. Bowen said apartments will be market rate, but as many as 20% of the one-bedroom units will be listed for less than $1,000 a month to provide an option for the area workforce.

“We’re trying to build some place for folks to live who might not have the desire to live in a big, single-family home,” McCordsville Town Manager Tonya Galbraith said. “We really don’t have that kind of inventory here.”

“This represents a paradigm shift in development for McCordsville,” he said. “We need to have something that has more of a nexus of activity and this is really the focal point, the heart of the community.”

“It’s really appealing for local businesses that don’t need a lot of space and don’t want to be burdened by a long-term lease, but do want to be in a great space with great energy,” Bowen said.

“McCordsville doesn’t have a town center, much like Fishers didn’t several years ago,” Galbraith said. “It’s super, super exciting for us, and I think the excitement is just going to grow. This will be transformative. It will give people a sense of place so that they’re not just ‘living outside of Indianapolis or Fishers.’”

In addition to the apartments, there will be roughly $8 million of infrastructure improvements made on the McCord Square property. Galbraith said the city is working on the financials of a $4 million bond to pay for that infrastructure, as well as the details of a $6 million TIF bond supported by Rebar’s apartment project.

The town’s redevelopment commission is set to review the project agreement and potentially sign it at its Sept. 7 meeting. From there, Galbraith said there will be plenty of opportunities for public input as the project goes through the necessary zoning and architectural reviews.