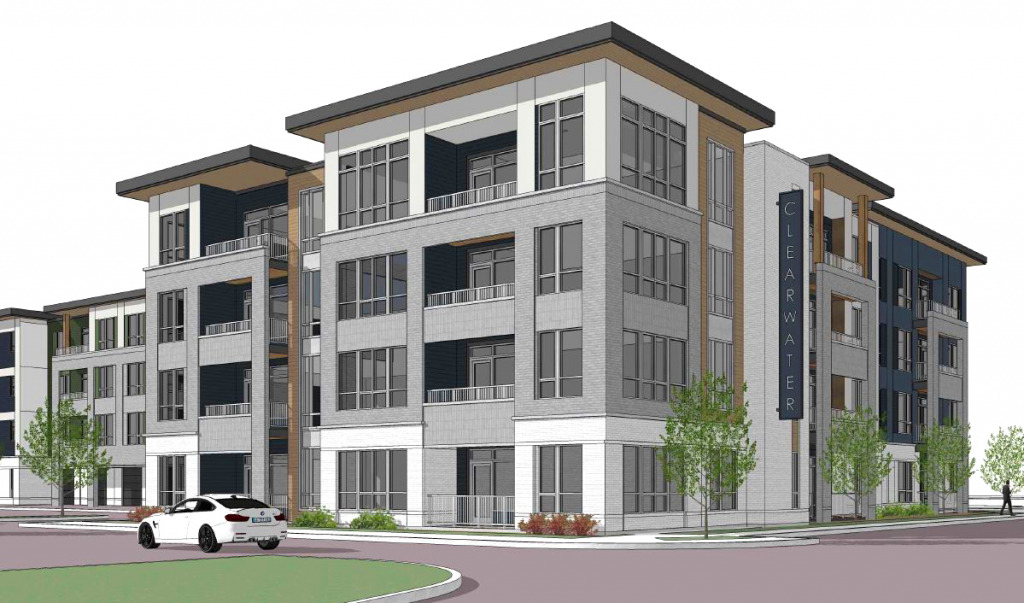 Clearwater would be located at 4016 E. 82nd St. in the Lake Clearwater area. (Rendering courtesy of Edward Rose & Sons)

A Michigan-based developer of luxury apartments plans to build a complex with nearly 300 units on the site of a former entertainment center in the Lake Clearwater area.

Edward Rose & Sons is asking for city approval to rezone the former Main Event Entertainment property at 4016 E. 82nd St. to allow for a multifamily residential complex, which it plans to call Clearwater.

The project, which would be spread across three four-story buildings and contain 299 units, is expected to span 9.8 acres. Edward Rose officials declined to share the projected cost of developing the project.

“First and foremost, we think it remains a very compelling area, given the access to Keystone at the Crossing and countless dining and entertainment options, along with proximity to employment, both in the immediate area and through highway access,” said Michael Gorman, president of Edward Rose & Sons’ Indianapolis division. “Long term, we are very [bullish] on the area.”

Clearwater is expected to feature all market-rate units. The property will have a mix of one-, two- and three-bedroom units, ranging in size from 700 to 1,700 square feet.

The development would also have an outdoor pool within a courtyard area of the largest building, as well as a couple hundred parking spaces.

The plans call for demolition of the 54,500-square-foot Main Event building, which opened in mid-2017. The Texas-based company permanently closed its Indianapolis location—which featured bowling, arcade games, laser tag, billiards and a full-service bar—in July 2020, amid losses from the coronavirus pandemic.

The property was developed by EPR Properties, a Kansas City, Missouri-based real estate investment trust that specializes in entertainment properties. The company still owns the property through a subsidiary holding company. The Main Event property is under contract by Edward Rose for an undisclosed price, pending approvals from the city.

In addition to asking the city to rezone the site from the C-5, commercial, to the C-S designation, which allows for apartments, Edward Rose is requesting the removal of a commitment that allowed for an entertainment use.

If Rose receives the proper approvals, Gorman said, the firm hopes to close on the property by the first quarter of 2023, with construction starting by the end of the third quarter of the year.

He said construction is expected to last 18 to 24 months.

Studio M Architecture and Planning is the design firm on the project.