Fishers city officials are making plans to spend $4.7 million that—in any previous year—would have gone to the city of Carmel.

Instead, special legislation passed in 2019 that caps Carmel’s income tax revenue growth at 2.5% per year for three years, with any excess transferred to Fishers, was triggered in the first year it could apply.

The legislation’s goal is to—at least temporarily—account for a quirk in the way income taxes are distributed so the revenue more accurately reflects the cities’ increasingly similar populations and median household incomes.

But the fact that the transfer was triggered at all in this pandemic year is a bit of a surprise.

The Department of Local Government’s forecast in July projected counties across the state would see an average 10% decrease in income tax revenue for 2021. But the numbers certified in September are actually higher—enough that they trigger the revenue-sharing agreement.

The result is unexpected money that Fishers will spend, in part, on public safety.

“When the pandemic hit, all of us started really trying to understand the economic and financial implications to municipalities,” Fishers Mayor Scott Fadness said. “Going into this budget year, the state had the unenviable position of trying to forecast and tell local governments how to plan for what revenues are going to look like in 2021.”

Fred Van Dorp, director of the Department of Local Government Finance’s budget division, said the state produced a 2021 local income tax revenue distribution estimate in July that used 90% of the previous year’s distributions out of “an abundance of caution.”

Van Dorp said the intentionally low projections were meant to encourage more conservative local budgets that could easily be adjusted to take in more revenue than expected.

“We knew those numbers would be too low,” Van Dorp said. “But the July estimates were imperfect for a number of reasons—including the fact that they didn’t trigger the new calculation between Carmel and Fishers.”

Though Fishers city budget consultant Michael Reuter anticipated a less significant shortfall than projected, city officials still took steps to cut spending by halting all employee travel and training, opting not to fill seven open positions and delaying a handful of other department requests. Those moves saved more than $1.2 million already this year and will continue into 2021.

Fadness said the city also identified reimbursements through the CARES Act and other federal funding programs to recoup an anticipated $1.6 million of the $2 million in cash reserves the city spent to create a city health department and launch COVID-19 testing operation in April. The city has provided tests to more than 11,000 residents, and Fadness said there’s still $2 million in available reimbursement funds through the CARES Act to continue offering the service.

For those measures and others, the city’s previously planned budget would’ve resulted in a $700,000 surplus in the general fund. Now that higher income tax distributions have been certified by the state, Fishers finds itself with an even greater surplus. 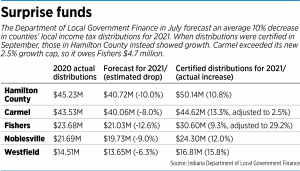 Local income tax revenue distributions are typically placed in a pot and distributed to local governments in accordance with a state-mandated formula, one that considers each community’s property tax levy and the amount of income taxes the city received the previous year.

However, under the 2019 legislation, the state capped the year-over-year growth of Carmel’s tax revenue allocation at 2.5% from 2021 through 2024.

Curt Coonrod, a financial consultant for the city of Carmel, said the city typically sees roughly 5% to 6% growth in its income tax distributions each year. Had that special legislation not been approved, Carmel’s income tax revenue would have grown 13% in 2021.

Michelle Cain, the Indiana Department of Revenue’s director of external communications, said much of the increase can be attributed to population increases and economic growth.

Fadness said Fishers was “on sound-but-conservative fiscal ground before, but now we find ourselves with a surplus. We think there’s an opportunity here to invest in our people, as well as additional infrastructure in our city.”

His revised budget proposal includes a request to increase the city’s allocations to not-for-profits from $100,000 to $150,000; provide a 3% raise for city staff and offer a one-time $500 bonus paid next January; and add a firefighter, a police officer, a civilian intelligence analyst and two full-time inspectors.

Perhaps the most concrete benefit of those additional funds is Fadness’ plan to fully fund the design and construction of a fire station in the northeastern part of Fishers.

“In the previous budget, we were advocating for just the land acquisition and design services to design the fire station, but we did not have the construction funding available,” Fadness said. “Given the new information, we feel very confident we can afford to build Station 97 in the northeastern part of our community. A lot of rooftops are growing in that part of our community and we anticipate calls for services to continue to grow.”

Rep. Todd Huston, R-Fishers, served last session as co-chairman of the House Ways and Means Committee (he was named speaker in March). He and other lawmakers supported the special legislation as a way to balance a previously uneven distribution.

“There was a discrepancy that was created—through no one’s fault or ill intentions—but a discrepancy that allowed for a larger share of the local income tax to go to Carmel than a comparable unit, like Fishers,” Huston said. “This slight change in the formula dealt with making sure that disproportional amount was narrowed.”

Fishers’ estimated 95,310 residents represented 28% of the county—but the city received only 23% of the tax distributions.

Given those similar populations and a less-than-$12,000 difference in median household income in 2018, the special legislation is meant to create a more equal distribution.

Despite the changes, Carmel Mayor Jim Brainard said the city’s budget hasn’t suffered for missing out on the $4.7 million.

“That’s the value of having a multiyear fiscal plan,” Brainard said. “We never really had to change our projections.”

He said that, even though Carmel could always use extra money for road projects, the city is continuing with plans to hire up to five new employees—including several in public safety.

“You can always use additional infrastructure funding, but we have a capital plan and we’re on schedule,” he said. “I wasn’t in favor of the legislation, but we try to get along with our neighbors and Fishers had some needs.”

Brainard said Fishers’ plans for its new money appear to be in the best interests of the city and Hamilton County.

“I’m anxious for the state to get the point as they promised when we can actually have distributed to us what our residents pay in,” he said. “That’s the fair system.”

It’s not clear yet whether the state will consider that type of change next year—or whether the special legislation will be triggered again before it expires. That’s because the pandemic is expected to drastically reduce income tax distributions over the next couple of years.

“We know what happened in the first year now. Of course, year two and three will be impacted by the current economic environment. The intent all along was to provide some level of consistency Carmel could manage to,” Huston said. “None of us foresaw, when we were doing this, the economic challenges the pandemic may have. We’ll just have to play it by ear as we move along.”

Fadness is reserving a majority of the surplus funds the city will receive and said he’s exercising caution as future income tax allocations are called into question. He said there’s a three-year window for Fishers to rectify the disparity with Carmel, but the special legislation is vulnerable to the pandemic’s impacts.

“We’re hopeful that we’ll see one, if not two, maybe three years of change,” Fadness said. “We’re also prepared for if that doesn’t occur.”•