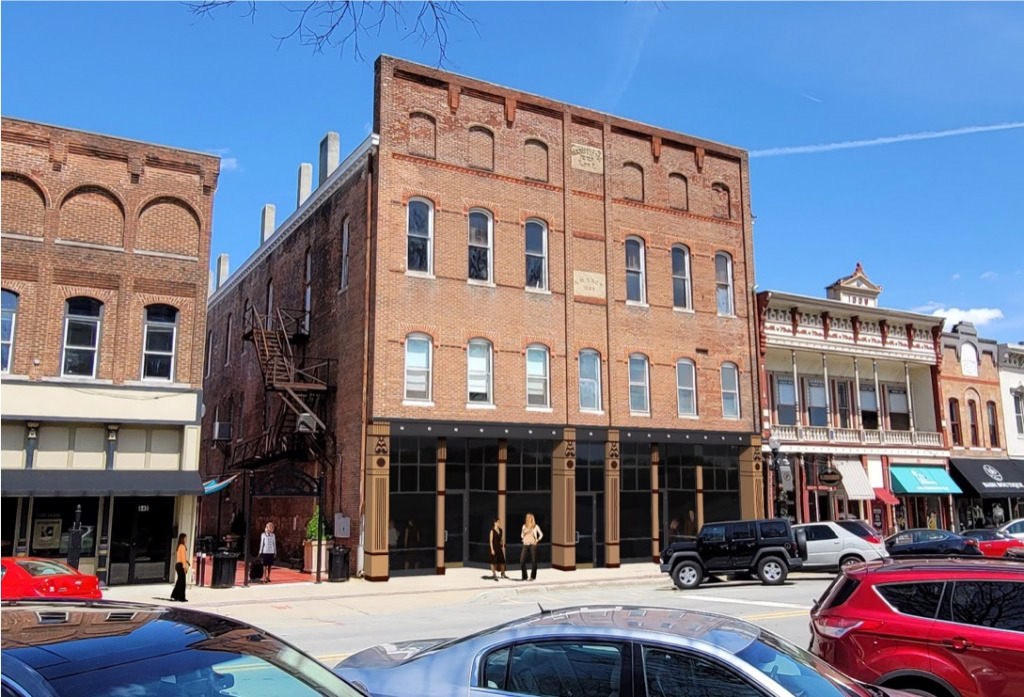 A rendering shows what the exterior of the Lacy Building in Noblesville could look like following renovations. (Image courtesy Chris and Katie Numberger)

A prominent historic building on downtown Noblesville’s Courthouse Square that served as a go-to spot for residents’ hardware needs for more than a century might become a space for the arts.

Chris Nurnberger and Katie Beeson Nurnberger purchased the Lacy Building in November 2021. Kirk’s Hardware, owned by Bill and Carrie Prater, was the last hardware store to occupy the building’s first floor when it closed March 31 after 20 years in business. A number of hardware stores operated in the ground level after the building was constructed in 1888.

The original owners of the building sold potbelly stoves and repaired buggies in the back. The store went by the names Griffin Brothers, Sharpe Hardware and S.E. Hardy & Co. before becoming Kirk’s Hardware in the early 1950s after Roy Kirk bought the business.

Kirk later sold the business to David and Jane Kingsolver, who hired Bill Prater to work in the store in the early 1980s.

The Nurnbergers approached Nickel Plate Arts about using the property following the purchase and asked what the Noblesville arts community might need.

“I was immediately excited to hear that one of the square’s oldest and largest buildings could have a new future and be activated after so many decades,” Nickel Plate Arts Director Ailithir McGill said in written remarks.

Some renovations—including the installation of an elevator—began after the 30,000-square-foot building was cleaned. Many areas of the building were abandoned for years and others were filled with storage.

The Nurnbergers still have decisions to make about the renovation, and Nickel Plate Arts’ plans remain tentative. However, the organization is looking at several possible plans for the building.

Nickel Plate Arts could manage the studio spaces and potentially hold a master lease to sublease to artists.

Potential plans call for installing 15 to 20 studio spaces of various sizes on two mezzanines. The studios could be used by traditional artists or by graphic designers and 3-D artists.

Nickel Plate Arts might also design some spaces for musicians or photographers if there is interest from the community, and shared common room could be used as a classroom or event space.

The organization also could develop two studios in the basement for ceramics work, which would include two working kilns. A welding studio might also go in the basement.

Nickel Plate Arts also envisions a first-floor space for artists with an entryway from the alley behind the building. The area could be used as a retail or gallery location for one artist or a shared space to feature work made by all the artists in the building.

“The more I looked, the more potential I saw, and the more I worked with the Nurnbergers, the more convinced I was that they wanted to be meaningful, long-term partners for the arts community,” McGill said.

Plans for the renovation also include a 1,200-square-foot expansion of the lower mezzanine, according to Katie Beeson Nurnberger.

McGill said he hopes the studios can begin taking shape by the summer or fall of 2024.

Robert McGill, a partner at Noblesville-based Peterson Architecture, is the lead architect of the Lacy Building renovation.

Correction: The original version of this story included the incorrect number of stories in the Lacy Building. The building has three stories in the front and four in the back. It also has a basement.