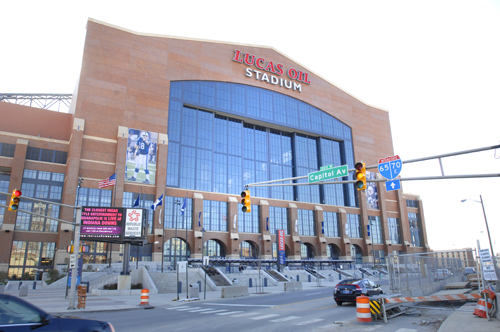 Indianapolis has turned down a request from the National Football League to potentially host the AFC Championship game at Lucas Oil Stadium later this month due to an already packed convention calendar for the city, officials say.

Executives with the Indianapolis Colts said they were approached earlier this week by league officials about hosting the game on either Jan. 28 or 29, after the cancellation of the Week 17 game between the Buffalo Bills and Cincinnati Bengals threw a wrench into the league’s typical playoff procedures.

Both teams are playoff bound, but regardless of the outcome of this weekend’s games, they’ll have skewed winning percentages compared to other playoff teams due to the fact they’ll have played one fewer game. A few playoff scenarios would see teams meeting in a neutral site AFC Championship game in a to-be-determined city.

Indianapolis was approached to host the game, but the city already has an event on its calendar at Lucas Oil Stadium and that would make it nearly impossible for the NFL to host the game there.

The Central Zone Invitational, a national volleyball tournament hosted by Capitol Sports Center, is expected to draw as many as 30,000 people downtown, with a peak hotel room occupancy exceeding 7,000 rooms, which accounts for nearly every room in downtown Indianapolis.

Visit Indy and city officials made an effort to see if the stadium could accommodate both the tournament and the NFL game.

“After the NFL reached out to the Colts to explore the possibility of Indy hosting the AFC Championship as a neutral site, the Capital Improvement Board and Visit Indy quickly touched base with … Capitol Sports Volleyball, which has grown each and every year it has been in the city,” said Chris Gahl, executive vice president of Visit Indy. “With 30,000 volleyball players, families and fans coming in to spend the same weekend for the event [as the championship game], based on timing, that event had to stay in place as it was.”

The volleyball tournament is an annual event that has grown in size substantially over the past several years and this year is expected to have an economic impact of about $10.7 million.

The event is expected to occupy the entire Indiana Convention Center as well as a portion of the stadium. Tear down for the event isn’t expected to begin until late Sunday afternoon, with set up for Monster Jam, a monster truck show event, slated to start early Monday.

“It’s our understanding that [the volleyball event] has been set in stone and cannot be moved, and virtually every hotel room in the city is booked,” Pete Ward, chief operating officer for the Colts, told IBJ. “So, it’s just one of those things you can’t prepare for, or really anticipate—that Indianapolis would ever be the site for a neutral-site league championship game. It’s just one of those things where the timing didn’t work.”

The tournament uses not only exhibit halls inside the stadiums but the field area, as well. Paired with the lack of hotel rooms and parking spaces created by usage of the stadium, the event’s presence downtown makes hosting a neutral-site NFL game that weekend an impossibility, Ward said.

The scheduling conflict would not have come into play had the Colts reached the playoffs—and the AFC championship game—this year. The Colts have triggers in their contract with the Capital Improvement Board that allows the team to take precedence in the event it has a playoff game that overlaps with an existing convention or event. That trigger did not go into effect because the game will not include the Colts.

“It would have been great for the city to host an event like that because virtually all the fans would be coming from out of town,” Ward said. “But at the same time, we still have this huge volleyball event that is filling up the hotels and restaurants in its own right. That’s beneficial.”

A neutral site game would be required under the following scenarios, according to the NFL:

A final site has not yet been announced for the game.