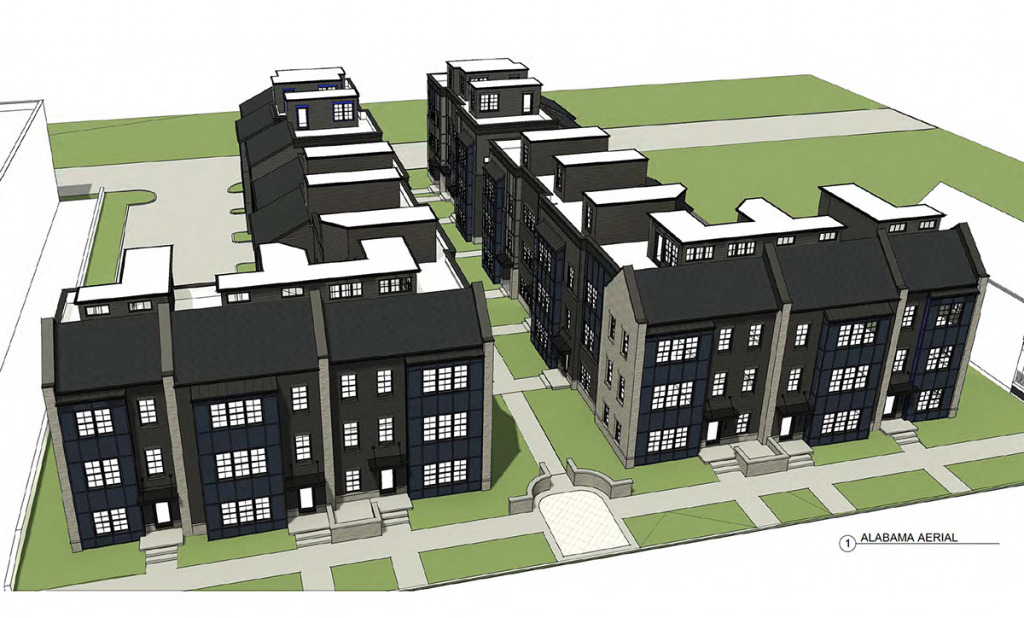 If approved, construction on the project at 1214 Alabama St. could begin after the property sale closes this summer. (Rendering courtesy of Onyx+East)

Local developer Onyx+East plans to spend about $6.5 million to develop a vacant tract in the Old Northside Historic District into 18 townhouses.

The firm has secured a 0.9-acre parcel at 1214 N. Alabama St. for the yet-unnamed project, which would consist of 18 single-family attached homes across four buildings. The property is under contract with current owner Traders Point Christian Church for an undisclosed price, pending city approvals.

Onyx+East is expected to appear before the Indianapolis Historic Preservation Commission on Wednesday for a preliminary review of the project design. Such reviews allow developers to receive feedback from commissioners on projects in historic districts before scheduling a hearing for a vote.

The Old Northside was a prominent residential neighborhood in the late 19th century. It features many restored home with high-style Victorian architecture, including Italianate and Queen Anne mansions. Its notable residents included Pres. Benjamin Harrison and Ovid Butler, the founder of Butler University.

The Onyx+East project would include units in three-story structures, each ranging from 1,500 to 2,100 square feet, according to the developer. The houses would have two-car private garages and two to four bedrooms, along with a rooftop deck.

The homes would be accessed from an alley, Hudson Street, and would also include eight off-street parking spaces for guests.

Prices for the homes have not yet been finalized.

The project would be largely constructed from Hardie board, masonry and limestone, according to project filings with the IHPC. The site is zoned as D-8, a dwelling district.

Onyx+East is expected to consult with Old Northside residents through a public input meeting in mid-January, with plans to return to the IHPC for a vote in February.

If the project is approved approved, the land sale, which has been pending since July, would close this summer. Construction would start shortly after. First units are expected to be delivered in 2023.

Indianapolis-based Rottmann Collier is the architectural firm on the project.