A property tax credit that will give Indianapolis homeowners up to $150 off their spring bills has passed unanimously through the City-County Council and received the mayor’s signature.

The tax credit is for homesteads, or single-family, owner-occupied residential properties. Ninety percent of the homesteads in Indianapolis, or 191,500 individual properties, are eligible for a credit. The credit is a large priority in the city’s 2023 budget. 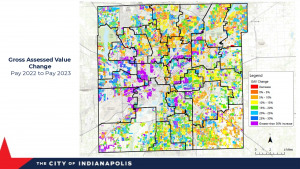 Mayor Joe Hogsett highlighted the passage of the proposal in residents Tim Rice and Kathy Allender Rice’s front yard Thursday. The couple’s home is an example of how Indianapolis property values have been impacted by the increase in demand and inflation.

“Their Riverside home has experienced a 50% rise in estimated value just in the last two years,” Hogsett said.

Tim Rice grew up in the Riverside neighborhood. He said the tax break gives the couple one less thing to worry about.

A map provided by the city shows that areas of downtown have seen some of the largest increases in gross assessed value. Parts of City-County Council President Vop Osili’s district—which includes Riverside—have seen home values increase over 30% between the 2022 and 2023 assessments.

Osili spoke at the event in favor of the tax break, but acknowledged that there is more to be done.

“The work certainly does not end here,” Osili said. “There continue to be significant racial disparities in home ownership, especially with redlining. According to SAVI, Black borrowers were twice as likely as white borrowers to be denied loans, even when their income and debt are the same.”

Renters are also affected by rising home values, Hogsett said, which is why the city is continuing to fund a tenant legal assistance program and IndyRent, which provides eviction assistance funding.

Hogsett signed the proposal at the event and the 2023 budget is set to be finalized in late October.