After all, the demographic trends powered by aging baby boomers are unstoppable. Between now and 2040, the number of Americans 65 and older is on track to swell from 54 million to 80 million, with the number 85 and older rocketing from 7 million to 15 million, according to the U.S. Census Bureau.

And as Carmel-based Invesque, owner of 121 health care properties in the United States and Canada, noted in a November PowerPoint presentation, per-capital health care spending among the 85-and-over crowd is 2.4 times the U.S. average.

“Massive wave of aging baby boomers will utilize greater health care services and spend more dollars on health care,” the presentation notes. “We are just beginning, and the real growth is ahead.”

Invesque CEO Scott White says that investment proposition remains intact. “As a real estate investment thesis, we’ve always had a longer term in mind,” he said. “I still very much believe in what we are doing.”

But it is hard to exaggerate how awful the past year has been, as COVID-19 hurt the full gamut of health care real estate in its portfolio, from nursing homes and office buildings to memory-care and assisted-living centers.

Invesque operates 30 of the senior housing properties itself. But even where it is just a landlord, it is reliant on the underlying health of the operator to collect rent.

“You are dealing with challenges you have never dealt with before,” White said. “You are first and foremost trying to keep residents and staff safe.” 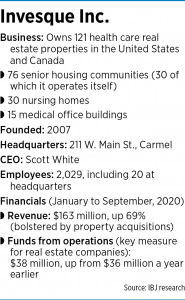 Indeed, occupancy in Invesque senior housing communities had declined to 82.7% as of Sept. 30, down from 87.9% one year earlier.

And “given the stress occupancy has come under for many seniors’ housing facilities since the outbreak of the pandemic, Invesque’s current occupancy rate is likely materially lower,” Canaccord Genuity analysts Mark Rothschild and Michael Pennington said in a report.

It is easy to understand why. Moving to senior housing typically is an option, not one forced by a specific medical condition. As a result, it’s one many families are putting off.

“If you could avoid it at all costs, you weren’t going to put a loved one in a facility where you might not be able to visit them,” White said.

Many families also have steered clear of nursing homes if at all possible because they have been a hotbed for COVID-19 deaths. Nursing home residents and staff have accounted for 163,000, or 34%, of all U.S. deaths from the disease.

Given that reality, hospitals have been routing more patients to home care, rather than nursing homes.

Meanwhile, efforts to control the virus have required operators to spend millions of dollars on personal protective equipment and other containment measures.

“You have been hit in both directions. Occupancies are down and costs are up,” White said.

All of that has taken the steam out of Invesque stock. Shares, which traded at $7.08 in February 2020, have deflated to about $2.25, a decline that reduced the company’s market value by $265 million.

Despite the drop, analysts say shares aren’t necessarily a bargain.

“While the current share price appears compelling, we see significant risk inherent in the company and leverage remains elevated,” Canaccord Genuity analysts Rothschild and Pennington said in a report.

Investor enthusiasm took a blow in April when the company eliminated its dividend to conserve cash. It was paying 73.78 cents per share on an annualized basis. Dropping the dividend saved $40 million annually.

“We were one of the early companies to suspend its dividend,” White said. “I wanted to be in a position of financial strength and power” as Invesque confronted the uncertainty of the pandemic.

Eliminating the dividend and other cost savings came in handy as Invesque sought and received additional flexibility from its lending group. The fast-growing company still has substantial debt—more than $1 billion—but it has no major debt maturing before 2022.

Still, analysts say the company faces plenty of challenges—in part because of the financial fragility of some of its operating partners.

In November, Invesque announced a memorandum of understanding that would scale back its business relationships with the struggling Illinois-based nursing home operator Symphony Care Network.

Under the deal, Symphony would cut the number of Invesque properties it runs from 16 to eight. The other eight would transition to new operators or be sold to Symphony.

Pressure is unlikely to let up on the nursing home industry anytime soon. U.S. nursing homes are likely to see revenue decline $22.6 billion in 2021 following an $11.3 billion decline in 2020, according to the American Health Care Association.

Occupancy, already at record lows, will remain under pressure, analysts say, especially if hospitals continue transitioning patients directly to home care, skipping over nursing homes. The risk of that move is that patients are more likely to end up back in the hospital.

“A key question for [nursing home landlords] will be the ability to claw back lost occupancy as government stimulus fades and whether market share lost to home health will be recaptured,” BMO Capital Markets analysts Juan Sanabria and John Kim wrote in a report.

White isn’t at liberty to disclose fourth-quarter financials before the company announces them on March 11. But he struck an optimistic tone—albeit one laced with caveats.

“There is still plenty more for us to work our way through—the pandemic is not over,” he said. “I think in terms of our industry, the worst is behind us. But there is still a long way to go.”•